Combining the concept of sports and lifestyle 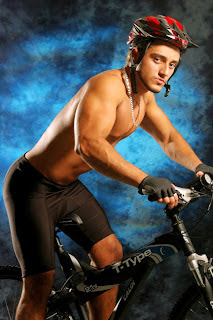 It is 30 minutes since Stanley started to run on the treadmill. With a headphone covering his ears and his eyes glued to the TV in front of him relaying world news, he is working out in full spirit. "I do this twice a week, which is not bad to keep myself fit," said Stanley while wiping sweat off his body.

Stanley, who works in an advertising company, is not alone at the gym. Dozens of other people are working out on treadmills or on static bicycles. Their eyes are also glued to TVs affixed to the walls of the gym.

When one visits Celebrity Fitness one can really feel the atmosphere promised by the management. The fitness center is a hive of activity, with fitness buffs working out to the accompaniment of entertaining TV programs. The management has designed the interior with a distinctive style. The concept here is futuristic complemented with flat screen TVs and large speakers. There is also the Cardio Theater. It is a luxury changing room for members that includes a minimalist style caf‚ and lounge. Also available is an attractive spinning and aerobic studio.

Celebrity Fitness, located in upmarket malls such as EX Center and Plaza Indonesia, looks more like an entertainment spot than a fitness club. The management says that a fitness center or club should not only be filled with fitness facilities but can be combined with an entertainment concept. "That way fitness can be fun," said John Franklin, representing the management during its launch a few years ago.

Maybe a concept combining fitness and entertainment under one roof is refreshing for fitness buffs in Indonesia. Those who used to go the gym with their own walkman or discman can now leave the devices at home. Working out at Celebrity Fitness promises to be enjoyable as 35 strategically located speakers provide soothing company in the form of popular music.

This concept has successfully altered the way people regard fitness centers as places at which to exercises only. The customers of Celebrity Fitness are mostly professionals over 25 years of age who love the cosmopolitan life and to mingle. Since first opening in Jakarta in 2003, Celebrity Fitness has established several branches in the city. All of them are located in malls, which are the hangout of choice these days.

Celebrity Fitness is not the only player in the business. Fitness First has also applied the same concept. Complementing the lifestyle of city people, Fitness First, which has 440 centers all over the world, is also present in Jakarta's malls and plazas, such as in Plaza Semanggi, Taman Anggrek Mall and Cibubur Junction. At Senayan City it is a larger and more complete and called Fitness First Plus.

Besides the usual fitness facilities and equipment, a spa and a swimming pool can also be found here. Its lounge and VCD rental shop also make it different to other fitness centers. The members' lounge provides free soft drinks, tea and coffee, while VCDs can be borrowed free of charge for two days.

Celebrity Fitness and Fitness First are indeed pioneers in combining sports and entertainment. They not only offer weightlifting and aerobics classes, but also various exercise facilities with a lot of equipment. About 60 percent of the members are females, and just like on ladies' nights at nightclubs, a large number of men tend to crowd the places.

Previously, fitness centers in Indonesia were designed as sports centers or were attached to hotels, like Clark Hatch, Odiseus, Life Spa & Fitness Center, MyBody Gym, Body Soul Centre and Quantum. Today, however, fitness centers are setting up in different locations, like malls and entertainment centers. The proliferation of fitness centers is no doubt in response to the needs of city people with a stable, established life. "Fitness centers have turned into social settings just like other places, say bars or offices," said Doug McKee, a private fitness trainer at The San Francisco Bay Club. "Each social setting has things about it that you don't like."

What is undeniable is that diligently exercising or playing sports makes one fitter and healthier. For busy people it has become a vital part of their daily routine. They are of the opinion that such activities can soothe their muscles and calm their minds, plus, of course, keep them healthy.

In major cities, sports activities are no longer regarded merely as a means to stay healthy but have become part of life. Yes, it is time to give your body the advantages of a workout after a full week's work. And now you don't have to go far to enjoy the benefits of a good workout. Getting healthier and having fun is in a mall near you! (Burhanuddin Abe)