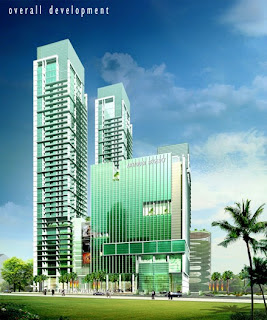 Entering 479 years of its age, Jakarta is still occupied by problems. Not much different with world big cities like Moscow, Paris, Shanghai, Tokyo, and New York, Jakarta faces land use planning & development dilemma amid the continuous crowded population.

Jakarta is the most dens city in the country. According to the 2003 data, Jakarta is inhabited up to 9 millions people dwelling in 650.40 km2 land (0.03% of the total land in Indonesia). In other words, the land: man ratio is 13.838 people/sq. km square. If Jakarta’s population increases by 500.000 people every year as Jakarta Governor, Sutiyoso said, imagine how crowded is the city?

Like a time bomb, problems of the city need immediate solutions. They are uncontrolled development, lack of infrastructure, transportation, crime, flood, traffic, slums and many others.

Unfortunately, Jakarta and its surrounding cities never have an integrated and definite urban planning since a long time ago. Today, the cities are “well-decorated” with damaged environment; the land, the rivers, the sea and the air. Since 1970 to now, the local government and its leaders have never implemented programs as powerful solutions to end the problems, let alone employing significant environmental rehabilitation programs.

In the early 1990s, Jakarta’s green area has decreased to 17% while the city is supposed to preserve 33% of the total area. Today, the city has lost even more absorption zone.

Up till now, there is none of the Jakarta’s local government programs could answer the flood problem, including the environmental factor. The construction of West Flood Canal for instance seems has not yet to be the long-awaited solution.

The city traffic is another confusing problem. More each day we feel the traffic jam is worsening. The ratio of road: vehicles is awfully unbalanced. There are 350 new cars and 1.000 new motorcycles hit Jakarta roads everyday.

Government tends to answer this crisis by constructing more roads and at the same time constantly jeopardizing thousand hectares of green areas. Bus way as one of Jakarta’s traffic-reducing programs is an inapt solution. Constructed by taking one-third to a half space of the available road spaces, Jakarta local government apparently takes sample from Bogota’s transportation system, a city that doesn’t resemble at all with Jakarta. Bogota, a city in South America which has only 1 million populations could not be a benchmark to implement such solution while crowded cities like Shanghai, Tokyo or New York which are supposed to be our model construct more subways and MRTs as their transportation system.

As a conclusion, the metropolitan city of Jakarta has never been comprehensively planned. The city’s planning and development is only based in ad hoc manners and by corruptive interests.

In housing problem, Jakarta is still the “home” of the homeless. Albeit the government provides public high-rise residences, still there is a problem of wrong inhabitants. The residences supposed to be dwelled in by middle lower population, in many cases are inhabited by the opposite class. Observing this chaos, the local government fails to implement a publicly oriented space politic where it must put priority for public limited land use.

Local government of Jakarta could make cooperation with trusted developers to create more autonomous cities by developing suburb areas around Jakarta. This step could subtract housing problem. While the city housing should be more high-rise oriented which save more spaces and cover more people like constructing apartments or multi-storey residences.

Today, every corner of Jakarta has been fully occupied by trade centers, town houses, apartments and office buildings. It would be more interesting and useful if they are “packaged” as an integrated property complex like the ones we see at Senayan, Sudirman, Thamrin, Gatot Subroto, Pondok Indah, Mega Kuningan, and Permata Hijau area.


One of the projects which recently has been developed by Lippo Group is Kemang Village. This integrated property project is based by global city concept and located in Jalan Pangeran Antasari, South Jakarta, in an area of 12 hectares size. The project is dubbed as the most integrated and biggest new city offering international standard infrastructures and public facilities specially planned for international communities and the elites of Jakarta.

The concept is not that novel in some world big cities. A new modern city is not only overflowed by apartment but also with shopping mall, hotel, schools, and hospital. All in one integrated area. The inhabitants would have everything they need without exiting the village.

What can we say, amid the limited living space and city traffic, it takes something smart to get out of all the problems, isn’t it? (Gordon Benton, Urban Planning & Development Expert)
Posted by Burhan Abe di Tuesday, October 16, 2007