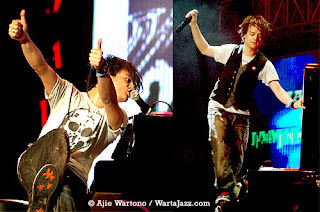 After a sluggish opening, the second installment of Java Jazz (JJ) Festival ended on Sunday night on a high note, with artists turning in some of the event's most memorable performances before entertainment-hungry crowds.

The absence of a noteworthy music festival in the capital prompted music fans to swarm the JJ venue, Jakarta Hilton Convention Center, helping to cement the festival's reputation as a must-see live event for years to come.

During the three-day festival, concertgoers enjoyed a rare delight that comes only once a year, in the form of numerous shows mounted by top-notch local and international artists, such as Bubi Chen, Indra Lesmana, Tower of Power and Patti Austin. Not a single show was left unattended, with even filler shows staged by little-known performers enjoying a huge turnout.

Shows from headlining acts such as Patti Austin, Bob James, and Kool & the Gang -- aside from one staged by Tower of Power on the opening day -- were unquestionably a full house, given the performers' marketable names. One notable, if heartwarming instance from the festival is that almost all shows by Indonesian performers were not only sold out but were also met with the warmest of receptions from the crowd, indicating that homegrown music has finally found a home in the country.

Collaborations between local musicians like Harvey Malaiholo, heartthrob Marcello Tahitoe or Ello, and international performers such as American saxophonist Michael Lington and jazz guitar guru Lee Ritenour bore evidence of the abundance of promising talent from local artists. One of the most promising locals is Berklee Music School graduate Nial Djuliarso. Jazz purists and cognoscenti made a beeline for the icy-cold Femina Lounge in the depths of the festival venue Sunday evening.

One of the last acts on, the Nial Djuliarso piano trio, with Donny Sunjoyo (double-bass) and Zulham (drums) was a real treat that cast away the katabatic gloom with musical warmth and light. Playing a mix of jazz standards and his own compositions on a piano that was slightly out of tune (despite the frantic efforts of a hapless tuner immediately beforehand) Nial and the boys showed a highly appreciative audience what the essence of jazz was all about: intelligent ensemble playing, exquisite solos (especially some extended drum work by Zulham) and genuinely creative improvisation.

A highlight of the gig was some revelatory improvisations on melodies from Indonesian composer Ismail Marzuki. The up-tempo numbers were notably exhilarating, with superb musicianship displayed by all concerned.

JJ organizers deserve kudos for going that extra mile to turn the event into what it became, including the provision of superb sound systems, but the jazz audience must surely deserve the most praise for refusing to let anything come between themselves and a good show. They booed Governor Sutiyoso when he delivered a speech after a Daniel Sahuleka show, appearing to reject any possibility of the heavy hand of bureaucracy spoiling their fun.

Taking a cue from the crowd's warm reception, festival director Paul Dankmeyer considered JJ 2006 a success and promised to stage another one next year. "We hope that from the experience we have gained from two festivals we can stage an even better event next year," told Dankmeyer optimistically. (M. Taufiqurrahman)