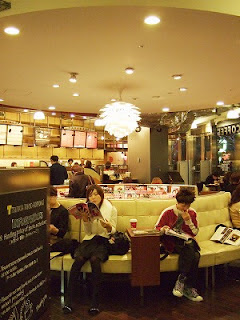 There was a big sale at QB (Quality Buyer's) World Books some time ago. The news about this big sale, circulated through various mailing lists, was quite surprising. On the one hand, avid readers could go on a shopping spree and obtain good books at greatly discounted prices. On the other hand, however, the closing down sale offering discounts of up to 70 percent was also a big blow to true book lovers.

This big sale was a big blow because, amid the difficulty to foster a reading habit among Indonesians, it was the death knell of the bookstore, which Richard Oh established with great enthusiasm. In fact, from the very beginning of its establishment, QB was intended to be one of the few providers of quality foreign books in Indonesia. QB offered books that would introduce us to foreign cultures, literature and thoughts.

What exactly led to the bookstore's closure is not clear. Perhaps one reason was that QB did not offer a wide selection of books so that people got the impression that it offered mostly literary and art works. Another possible reason was that in Indonesia buying books, especially imported ones, is not a priority. In fact, QB targeted the well-heeled as it customers.

Richard Oh is a known book aficionado, good writer and businessman. His passion for books prompted him to set up QB. How did he mix hobby and business?

"That's the trouble. Personally, it is better just to have a small business if you want to be an entrepreneur. If the financial scale is big, it is no longer a hobby and goes beyond idealism," said Oh, who is a fan of Pramoedya Ananta Toer and founder of NuvoCom Advertising.

As it happens, when a hobby is mixed with business, it must adhere to good business practices. A manager of a foreign bookstore said: "QB closed down not because of an unfavorable macro condition, but rather because of managerial problems."

Of course, no one wants to see other bookstores close down, especially since books are windows to the world and reading leads to knowledge.

When thinking of bookstores, several names come to mind. Long-established ones include Gramedia, Djambatan, Gunung Agung and Walisongo. Newer ones include Maruzen, Kinokuniya, Periplus and Aksara, which all sell imported books. The latter bookstores are quite expansive, especially their outlets in malls, plazas and shopping centers. All have attractive interior designs. Some even have coffee shops on the premises. "We sell not only books but also a lifestyle," said Judo Suwidji of Periplus.

That's why Periplus, which is part of The Periplus Publishing Group, whose network includes outlets in Singapore, Japan and the United States, always provides personal services with a modern taste to customers. Its 36 outlets in Indonesia have a simple contemporary Indonesian design concept. At its outlet in Kemang, South Jakarta, for example, Periplus, besides offering some 30,000 titles to choose from, also operates a cafe. Here a visitor can look for books to buy and at the same time relax.

Aksara in Kemang not only has rows of bookshelves but also rows of chairs, where visitors can read the books they want to buy. Further inside there is a leather lounge set and a children's corner, which has a wooden floor and cushions for children to recline on. The bookstore manager says that all these facilities are intended to pamper visitors, even though some may spend hours there reading instead of buying. "This is part of our business risk. We only want to show people that go to a bookstore are a very pleasant experience," he noted.

Obviously, almost all businesspeople agree that besides trying to instill in people a love for reading, bookstores must be seriously handled. Paulus A. Tandagi, company head of PT Kinokuniya Bukindo, said that readers of imported books in Indonesia grew by 10-15 percent a year. The demand for imported books is increasing not only because there is an increasing number of foreign graduates looking for books in foreign languages but also because more and more international schools have been set up in Indonesia.

That's why Kinokuniya, a licensed bookstore from Japan whose name means "a house in the Kinokuni area", is expanding its outlets to malls and plazas and has set a target of being Indonesia's largest and most complete store for imported books.

It is true that there are no soft sofas in Kinokuniya that may persuade customers to linger longer. However, this does not mean that this bookstore, which first opened its doors in Jakarta 15 years ago, neglects its interior design, the theme of which is the traditional Indonesian market. Kay Ngee Tan, interior designer for this bookstore, designed its interior with a combination of Japanese and Indonesian cultural elements, such as those found in Sogo Department Store, Plaza Senayan Jakarta.

To give prominence to Indonesian culture, there are hints of Indonesian handicrafts with interplay of lighting on the ceiling. The lighting effect in pictures and symbols is also intended to indicate zones in the bookstores.

Kinokuniya offers a vast selection of books. There are at least 32 categories of English books, 18 categories of Japanese books and 30 categories of Chinese books. The selection offers a wide array of subjects such as management, accounting, hobbies, handicrafts, lifestyle, literature, etc. It also stocks several categories of books that are usually unavailable at other bookstores, for example, Japanese comic strips, often referred to as Manga.

Kinokuniya Company Ltd was first set up in 1927 in Japan with its first bookstore in Shinjuku, Tokyo. The fact that Kinokuniya has outlets in the United States, Taiwan, Singapore, Malaysia, Thailand and Australia facilitates the management of Kinokuniya in Indonesia.

This wide network is very important in the management of a bookstore, particularly because it enables it to obtain quality books. The availability of books and comfortable facilities are two things that bookstore customers want. Interestingly, Kinokuniya is often found next to a Starbucks cafe, which also belongs to Mitra Adiperkasa, the business group that owns Kinokuniya. When a bookstore is adjacent to a cafe, a customer may take the book they just bought into the cafe to read while sipping a cup of coffee. In this way a bookstore may also serve as a meeting point just like a trendy cafe does.

Nevertheless, books are not a commodity that enjoyed rapid and considerable growth in Indonesia. Every month, international publishers publish hundreds of titles. In a global world, this will eventually spill over into Indonesia. Indeed, for developing countries like Indonesia, books are still considered luxury goods. However, as people's purchasing power strengthens, it is not unlikely that books, which improve the intelligence level of a nation, will become highly lucrative business commodities. (Burhanuddin Abe)