Welcome to the Show! 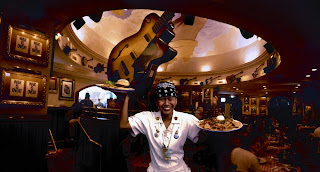 A hotel is not merely a place where you can spend the night but is also a place to enjoy some entertainment. That's why nearly all star-rated hotels provide entertainment, both for people staying the night and for outsiders seeking some merriment. These facilities may range from a music lounge, a cafe to a karaoke hall and even a club.

There are hotels that offer serenity, mostly those adopting the resort concept, and also those that sell entertainment. Hard Rock Hotel Bali, for example, has made itself a center for activities linked with entertainment. This is indeed a positioning that this hotel, whose name is borrowed from that of a famous cafe established in London on June 14, 1971, wishes to feature. "The name Hard Rock itself is associated with a place of entertainment. We want to check out the most Rockin' Hotels around," said Dewi Endah Banowati, marketing communications manager of Hard Rock Hotel Bali.

Hard Rock Hotel Bali is not only located next to Hard Rock Cafe, which presents live music shows every night, but also has its own music stage, which is located in the lobby above the bar and is called Centerstage. It rocks from 11 a.m. to 1 a.m.

In addition, nearly every space of the hotel is named after something to do with music and connotes entertainment. Each type of room is named on the basis of a music genre, as is Lil' Rock Kids Club, a playground for children. The area of the main swimming pool, for example, presents music and has a bar that serves Tequila, Reggae and Limbo.

This hotel, which is filled with decorative memorabilia of the world's top musicians, treats guests like music superstars. Guests staying at Hard Rock Hotel are called "stars" while hotel staffers are "band members". Children are nicknamed "lil' rockers". Every guest is given a room key that they can wear around their necks just like a stage pass. Welcome to the Show!

Hard Rock Hotel, which uses "rest, relax and rock" as its motto for service, is a top example of how a hotel treats entertainment as the most important part in the concept of a hotel.

Other star-rated hotels also make an effort to make entertainment a major part of their services. If you have ever stayed at Hotel Mulia, Jakarta, for example, you are surely familiar with CJ's. The bar, which was renovated in December 2006, opens from 5 p.m. to 2 a.m. on weekdays and is open until 3 a.m. on weekends.

What better way to end the day than with a well-deserved cocktail and rocking live music? A hit among guests and locals alike, CJ's is the place to see and be seen. "So let your hair down, hit the dance floor and get set for a wild night of non-stop partying!" said Romy Herlambang, director of communications of Hotel Mulia Jakarta.

According to Romy, entertainment is indeed an important part of a hotel. Many people visit the hotel not to stay but to eat at one of its restaurants or to hang out with friends. That's why The Kafe has enjoyed particular attention from the management, as is evident from the expansion of its space so that it can now accommodate 361 people instead of the original 298.

There are five main elements at the hotel that will kick off in mid November 2007. These five elements are the lounge, the Japanese food area, the Middle East area, the Italian area and the international area. "All this is intended to accommodate the needs of hotel guests and is in response to requests by customers who do not necessarily stay at the hotel," he said.

The same strategy is also employed by Ambhara Hotel Jakarta. Located in Kebayoran, this hotel is situated opposite a major shopping center and is near the central business district. It has the Arios Music Lounge and is in the process of establishing a music lounge with a new concept called The One.

If you are familiar with Hotel Sari Pan Pacifik Jakarta, you would have heard of its Pitstop Bar & Lounge. This place has indeed undergone a change of name. Originally called Pitstop, it was later renamed Avenue but has since assumed the new name of Pitstop Butterfly.

Pitstop's concept leans toward live entertainment. The music genres on the menu include classic disco, acid jazz, R&B and Unplugged. The new Pitstop has two VIP rooms with karaoke. In addition, Pitstop also has one VIP room called Butterfly Lounge. This room is twice as large as the other two karaoke rooms. Besides the karaoke facility, Butterfly Lounge is a suitable venue for private parties. Visitors can also enjoy the aromatic Sisha. Spirits and wine tend to be the dominant beverages. The lounge has tables to accommodate 200 people and standing room for about 350 people.

Meanwhile, newcomer Grandkemang Hotel, which is located on Jl. Kemang Raya, South Jakarta, realized from the start that entertainment is an inseparable part of a hotel's facilities. This hotel boasts its d'lounge, which is a posh lounge suitable for private events with business partners or family members.

Located on the ground floor opposite the Sperta all day dining venue, this is a VIP lounge with a minimalist modern design. It has a sound system and a lighting system that can be adjusted to your wishes while you enjoy high tea or a glass of wine with cheese platter. d'lounge has a capacity for 20 to 25 people.

As a more sensational choice, B.A.T.S., located in Hotel Shangri-La Jakarta, is also a good option for a night out. This is a legendary music lounge, which was operational well before it became trendy here for people to hang out in a bar or a pub.

With a stylish interior design, which depicts a bar in a subway station in New York City, B.A.T.S. reflects the lifestyle of urbanites. It is here that urbanites spend their time socializing, chatting or just hanging out. Don't forget to order Urban BATS, a blue soft cocktail with a refreshing, sweet taste, which represents the dynamic and passionate spirit of urbanites. (Burhanuddin Abe)

Email ThisBlogThis!Share to TwitterShare to FacebookShare to Pinterest
Label: Check In