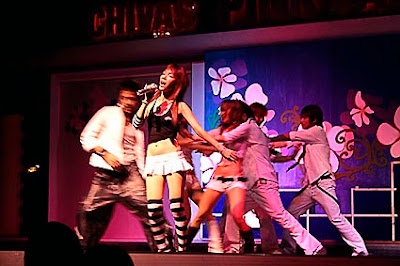 Rather than buy Bangkok durian, just fly direct to Bangkok! is AirAsia's advertising spiel for its Jakarta-Bangkok route.

Unsurprisingly, lots of people rushed to book for the maiden flight on Nov. 1. Seats on the 737-300 Boeing aircraft, which can carry 148 passengers, were sold out on the first day. "There is indeed vast potential for passengers flying direct to Bangkok. People usually have to fly via Kuala Lumpur. With the commencement of this new route, AirAsia, as a regional brand in Asia, connects two major Asian cities. We offer affordable fares for flights to Bangkok to support tourism and trade between the two countries," said Widijastoro Nugroho, marketing and distribution director for AirAsia Indonesia.

Currently, AirAsia flies from Jakarta to Bangkok once a day at 4:20 p.m. (West Indonesian Standard Time) and arrives in Bangkok at 7:45 p.m. local time. The flight from Bangkok to Jakarta departs at 9 p.m. local time. However, with Bangkok being a popular tourist destination among Indonesians, AirAsia is not the only airline that has a direct flight there.

Bangkok has overcome its reputation as a destination for sex tourism and is now a thriving tourist hub that offers various kinds of entertainment. To some, Bangkok is a magical land with beautiful temples and the impressive Royal Palace. To others, it is a city with a bustling nightlife that has a great variety of entertainment to offer: discotheques, clubs with the best DJs, bars, Thai dances, Ramayana performances and transvestite burlesque shows. And who has never heard of the lively Patpong bars, where tourists go more out of curiosity than for titillation. Everything is there for the taking in Bangkok!

Bangkok, or Krung Thep, which means the City of Angels, was established in 1782. With a population of some 10 million people, it is a blend of traditional and cosmopolitan. Thailand has everything to offer and more. It is laden with creativity and excitement. Despite its rapid development, the Thai people have not lost touch with their roots -- temples create tranquility with monks chanting mantras; along the Chao Praya River and various canals, boats carry people and goods just as they did centuries ago.

Every year, Bangkok celebrates festivals such as the Thai New Year and Loy Krathong (Festival of Light). Most special of all is the celebration of the birthday of His Majesty the King of Thailand.

To get with the spirit of Bangkok, just board a ferry on the Chao Praya River. From the Shangri-La Hotel and the famed Oriental Hotel, see the old villas that form part of the ancient city and sail past Wat Arun (Temple of the Dawn) with its imposing chedi. See the green and red roof and gilded spire of the Royal Palace. Don't miss the imposing gilded statues and murals depicting scenes from Ramayana. To see these objects more closely, visit the Jim Thomson House, a grand house filled with beautiful artwork. American Jim Thompson was the founder of the modern Thai silk industry before he mysteriously disappeared in the Cameron Highlands, Malaysia, in 1967.

Bangkok is also a shoppers' haven. Great department stores and shops can be found near the Skytrain Siam Station, stocking various fashion products, electronics and audio equipment, bookstores, candle shops and local designers' outlets. Traditional products, colorful silk items, embroidered cotton shirts from the north, silverware, porcelain, dried fruit, etc. -- it is possible to get whatever you want in Thailand! To improve your bargaining prowess, visit the local markets. The Chatussak weekend market is the largest in Southeast Asia with thousands of stalls. Closer to downtown is Silom Road night market, which attracts Thais and foreigners alike.

Bangkok is also noted for its culinary delights. Dishes such tom yam soup, green curry chicken, Thai noodles, green papaya salad and fish cakes are popular dishes for foodies in Thailand. There are also food courts for snacks or lunch. It is a real treat for visitors because they don't have to visit top restaurants to enjoy Thai cuisine. You can enjoy delicious Thai food at a low price by simply grabbing a meal at a food stall. All this is affordable with the savings made on low airfares from AirAsia. Just as its motto, "Now Everyone Can Fly". (Burhanuddin Abe)