Bookshops not just a place to find books 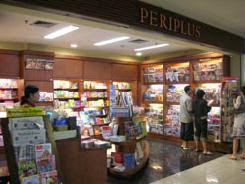 Today, bookshops are no longer filled with dust-covered books piled on unattractive racks, located in pokey, narrow lanes. Bookshops are now more likely to feature homey reading rooms with sofas where customers can sit and relax. Customers can read the books that they are considering buying without feeling anxious that the sales assistants will reprimand them. It is almost like being in your own private library.
This is one of the reasons why philosophy lecturer Tommy F. Awuy says he feels very comfortable shopping at Aksara Bookstore. Aksara is a Sanskrit word which means letter -- as in alphabet. Aksara began its business in the Kemang area in South Jakarta in 2001. A year later it became known as Aksara Bookstore and Aksara Music when CDs and Vinyl were thrown into the product mix. In 2004 Prodak, a retailer of gift and furniture items, joined the retail operations and it became Aksara: Books, Music, Gifts and Homeware.
Aksara's flagship store and headquarters are in the Kemang area, while Aksara Cilandak Town Square, also in South Jakarta, was opened on Aug. 18, 2003. Aksara's third branch, Aksara Plaza Indonesia, began operations in July of 2004. Aksara, which employs more than 100 personnel, operates under the motto: serving customers in a passionate, dynamic, creative, service-oriented and fun way, celebrating individuality. Aksara is not merely a bookstore, but part of a lifestyle. Similar facilities are offered by Kinokuniya. This bookstore has a branch in Plaza Senayan, South Jakarta, next to Starbucks, and is also a lifestyle icon for many Jakartans. Kinokuniya, which is a major bookstore in its home country, Japan, has 1,850 square meters of floor space in Plaza Senayan.
Present in Jakarta for the past 14 years, it boasts a setting akin to Jakarta's traditional markets. Its store on the fifth floor of Sogo Department Store combines Japanese and Indonesian features. Here one can find books and publications in various languages displayed side by side.
The traditional market concept seems to fit the uniqueness of Kinokuniya, which means a house in the Kinokuni area. Another plus point is that the bookstore offers a huge range of books. Fans of English novels will be pleased with their complete range including thrillers, in addition to scientific publications, travelogues and so forth. What is interesting is that one can find a large number of comic books, such as Superman, X-Men and the like. For those starting their career in film there are also many reference books.
Paulus A.Tandagi, General Manager of PT Kinokunia Bukindo, said that more than 200,000 titles were available in the bookstore, comprising 32 categories of English books, 18 categories of Japanese books and 30 categories in Mandarin. "Well, I must admit we have a rather limited selection of books in Indonesian," he explained.
A bookstore that has a voluminous collection of Indonesian books is Gunung Agung. Gunung Agung is a large bookstore which has been around for decades. This leading bookstore has recently developed a new concept of its own in Kelapa Gading Mall and Senayan City, called the TGA Bookstore. Compared to its older stores, the TGA Bookstore is definitely better designed and modern. Its interior is based on the corporate colors, red and blue, while the lighting is bright without the glare. The number and range of books offered are simply amazing. All this makes TGA Bookstore a comfortable spot while at the same time it promotes reading as part of a modern lifestyle.
TGA Bookstore with its brand new concept seems to have broken away from the old paradigm that a bookstore should only sell books. Here you can find many products including computers and computer accessories of various brands. These are sold in a corner called the Computer Station. Another corner offers a wide range of office equipment, such as tables, chairs, safes, fax machines, telephones and so on. Stationery and unique, fancy gifts can also be found in another corner, including a full range of school items.
Another bookstore with added value is Periplus. More than 30,000 titles, mostly imported, are available in each of its branches. Most of its branches are cozy; several have coffee shops like the one in Kemang, South Jakarta and Bali Galeria Mall. Periplus here, which is a part of The Periplus Publishing Group that has stores in Singapore, Tokyo and North Clarendon, USA, is indeed an enjoyable place to hunt for books. Although Periplus branches here are relatively small, between 100 and 150 square meters, they are still well designed. The Periplus store design by Jaya Ibrahim is semi minimalist. The use of wood which dominates the design gives the place a warm and homey ambience. The other thing about its design that catches the eye is the touch of local architectural features.
Periplus has an excellent range of books and magazines. Its cozy atmosphere and helpful staff make it a bookstore with style. International bookstores are indeed flourishing in Indonesia, but Periplus, established some six years ago, has a special place in the hearts of the country's book lovers. Through cooperation with publishers Periplus is able to offer lower prices compared to its competitors. "That is one of the reasons why Periplus has been able to survive amid competition from established and new competitors," said Judo Suwidji, General Manager of Periplus.
For a wide range of titles Periplus has excellent access to leading publishers in Singapore, Tokyo, New York and Sydney. Indeed this kind of network is vital for such a business in getting quality books. It is a known fact that every month hundreds of titles are published by international publishers. "We need a good relationship with leading international publishers to get complete information on books, including best sellers. The Top 50 New York Times Best Seller Book List, for example, is always available at Periplus," said Judo. (Burhanuddin Abe)
Tuesday, November 27, 2007
Posted by Burhan Abe di Wednesday, November 28, 2007