Community health responsibility of all 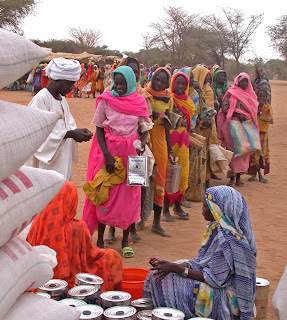 Believe it or not, every minute 12 children die due to starvation or hunger-related diseases, according to the latest data from the World Food Program. Ironically, 13 million children suffer from starvation in Indonesia today.

According to the 2006 records of the United Nations' Food and Agricultural Organization (FAO), chronic starvation hit some 854 million people in the world, with 96 percent of them, or 820 million people, found in developing countries. More than half of this number, or 350 million to 450 million were children. Compared with AIDS, malaria and TB, starvation is the greatest threat to children's survival. Even the number of children with these three diseases put together is still smaller than the number of starving children!

It is this reality that has become of deep concern to many parties. Not only the government but also private companies have begun to show their concern about this problem. Indeed, corporate social responsibility (CSR) in the health sphere is increasingly becoming the focus point of CSR activities carried out by a number of companies, particularly those with a business focus in the health and food areas, such as PT Unilever Indonesia Tbk (consumer goods), PT Nestle Indonesia Tbk (producer of milk and nutritional products) and Fonterra Brands Indonesia (milk producer).

There will be several other activities carried out under the partnership between Unilever and WFP in their cooperation called "Together for Child Vitality". First, through one of Unilever's products, Blue Band, there will be intensive promotion to attract more attention to the problem of starvation and to collect funds for WFP.

In line with the WFP program, there will be a nutritious food for children campaign (the School Feeding program). Unilever will help further develop this program by donating food products for additional nutrition. Along with WFP, Unilever will also be involved in a campaign on nutrition, sanitation and health in schools.

In this respect, said the deputy country director of the World Food Program (WFP), Indonesia, Bradley Busetto, WFP has so far helped 1.2 million Indonesian children by providing them with nutritious food through food aid activities in schools and health centers in such regions as Nanggroe Aceh Darussalam, Jakarta and its surroundings, East Java, East Nusa Tenggara and West Nusa Tenggara.

Almost half of Indonesia's regencies have experienced food shortages, and this collaboration with Unilever will help WFP reach children in the regions that need help. Unilever also encourages its employees to be actively involved in this partnership program for three years. In Jakarta, Unilever's employees took part in the "Fight Hunger: Walk the World" program on May 13, 2007. Unilever has some 20,000 employees worldwide, while in Indonesia its workforce stands at some 3,300 people.

This year, WFP has made available food donations for 21.7 million school children in 74 countries, including Indonesia. Most of them are girls from disadvantaged families. Of some 21.7 million children that have been targeted in this program, some 50,000 are Indonesian children.

Everybody will agree that to fight hunger among children is admirable and that the program must be immediately implemented in line with the UN Millennium Development Goals (MDG). The Indonesian government, as Coordinating Minister for People's Welfare Abu Rizal Bakrie has said, has, in the context of the MDG, set a target of reducing malnutrition and the maternity and child mortality rate by 2010.

Besides Unilever, PT Nestle Indonesia Tbk is also seriously carrying out CSR activities in the health area for the community. Activities are focused on three main things: (i) improvement of Indonesian families' nutrition; (ii) health and (iii) the environment.

In respect to nutrition, he said, Nestle's concern is not only about malnourished Indonesian children but also obese children. Nestle provides free milk to malnourished children. Meanwhile, to improve the nutritional status of over-nourished children, Nestle Indonesia has established cooperation with the Sports Medicine Department of the School of Medicine of the University of Indonesia. Under this cooperation, efforts will be made to educate over-nourished children and provide them with sports training to burn excess calories through a program called Bermain Asyik (Playing is Nice)

Another company carrying out a CSR program in the health area is PT Fonterra Brands Indonesia, a producer of milk under the brand names of Anlene, Anmum, Anchor, WAM and Chesdale. Fonterra is intensively promoting walking 10,000 steps every day for bone improvement. "We are committed to consistently educating the community in an effort to prevent osteoporosis. This time we are popularizing a daily walk of 10,000 steps," said the marketing manager of Fonterra Brands Indonesia, Baskorohadi Sukatno.

Another business player running a CSR program linked with sports is TNT Indonesia. Through Walk the World program, TNT globally expects to be able to create public awareness of the need to improve health. This program is also supported by the World Health Organization, FAO and UNESCO.

Due to a great many disasters that have befallen Indonesia in recent years, part of the special funds allocated by the government to address community problems has been spent on emergency responses. That is why the government hopes the private sector and the general public will participate in programs that improve community health. Most urgent in this respect is to combat hunger among children. Obviously, solving community health problems cannot be left solely to the government, given its limited funds and resources. (Burhanuddin Abe)