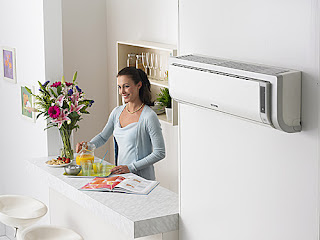 The market demands that household appliances today should not only be more practical but also more modern. This pushes producers to compete with their best products in terms of design and function. LG, for example, launched its Livia series of modern refrigerators this year. According to the president director of LG Electronics Indonesia (LGEIN), Lee Kee-Ju, Livia has been specially produced to meet the lifestyle needs of urbanites. These refrigerators for the premium market are available in different storage capacities, ranging from 350 liters to 700 liters and are sold at about Rp 9 million per unit.
This refrigerator has a number of features that the producer boasts can promote a healthy lifestyle. The first of these is its sealed vegetable box. This box, where you keep vegetables and fruit, has been designed to be airtight. In this way, fresh vegetables and fruit will not oxidize as fast and therefore they will not rot easily. The second feature is vita light, which provides lighting for the fruit and vegetables. Vita light stimulates the production of chlorophyll by photosynthesis so the vitamin content in vegetables will be maximized. The third feature is the green ion door cooling, which produces negative ions from green tea extract to eradicate bacteria and foul smells.
Banking on this innovative product, LG has been nurturing an ambition to push its sales. In 2006, a Growth for Knowledge research placed LG in top place in refrigerator sales, securing an 18 percent market share.
Samsung Electronics also does not want to be left behind. In the Digital Home Appliances Roadshow in Jakarta this year, this South Korean producer launched a series of digital household appliances. This shows Samsung's desire to promote sales through innovative technologies and its desire to lead the regional market in the refrigerator and washing machine category in 2009. "With the latest Samsung technology, we will continue to supply the market with a series of complete products, by blending the best in function and esthetics," said Park Hee-Hong, managing director of PT Samsung Electronics Indonesia, some time ago.
At present Samsung is the market leader in the category of side-by-side refrigerators in the five markets in Southeast Asia, including Indonesia, and it is ranked second overall in the washing machine and refrigerator category. With a perfect combination of innovative technology and stylish design, Samsung's household appliances have earned a number of consumer awards. Samsung RM25 premium refrigerator, for example, which uses the first Quatro cooling system in the world, was one of must-have gadgets in 2006 according to Time magazine and has earned the Good Buy award from Good Housekeeping magazine.
Obviously, Indonesia is a huge market for household appliances, including air conditioners, a necessity in tropical countries. In fact the sales volume of air conditioners in Indonesia has been increasing from year to year. The air-conditioner market records nationwide sales of some 12 million units per year. Of course, this is inseparable from the fact that there is an increasing demand for air conditioners following the emergence of a larger number of people in the middle to upper income bracket.
LG is one of the market leaders in air conditioners. Although LG did not introduce its air conditioners in the Indonesian market until 2002, it has quickly secured sales of some 80,000 units per year or about 20 percent of the national market. Generally, there are two types of LG air conditioners: Edenia Plasma and Goldfin/Plasmafin Split. Both use the technology that makes it possible for the air conditioner to absorb small particles like dust, cigarette smoke and foul smells and produce cool and healthy air.
Sharp is a very strong Japanese brand and does not want to be left out of the air-conditioner business. Its latest product introduces plasma cluster technology. Like the technology used in LG products, the plasma cluster technology produces a healthy atmosphere because this air conditioner produces positive and negative ions that can destroy bacteria or viruses found in a room. The use of plasma cluster technology is known to be able to lower pollution levels by up to 0.001 percent.
Meanwhile, for more premium products, Sharp relies on its Jetstream G6 series, which are split air conditioners using fan technology with a blowing capacity that is 15 times stronger than usual, and 500 AC (KC-6500E), which can be placed on the floor. It uses humidifier technology that can multiply air filtering.
For the Indonesian market, PT Sharp Electronics Indonesia has set a sales target of some 10,000 units, particularly for the hi-end AC series, which are intended for higher-income consumers. With these premium products, Sharp hopes to be able to promote the brand image of Sharp in the domestic air-conditioner market as it has now secured only about 10 percent of the market share, after Panasonic and LG.
Sharp premium products are indeed not alone in the market. They have quite a few challengers and one of these is Haier of the HSU-09LR03 and HSU-12LR03 series, which were only released in April. Haier, the largest Chinese manufacturer has introduced air conditioners in attractive designs. Haier air conditioners also use a microgen filter to minimize and overcome unpleasant smells in the room and prevent the growth of fungi. This air conditioner also contains vitamin C, which is good for the skin. Wow!
With all these superior qualities, Haier, which has secured 22.6 percent of the market share in China, aims to penetrate the Indonesian market with a sales target set at 100,000 units this year. What is clear is that the Indonesian market is indeed highly lucrative and attractive to air conditioner producers. Business competition is also very keen. Aside from LG, Samsung, Sharp and Haier, there are National, Electrolux, Sanken and other brand names. Indeed, while air conditioners function to cool us down, business competition is heating up. (Burhanuddin Abe)