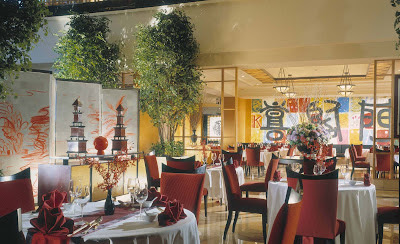 For those seafood lovers, Samudra Shark’s Fin, located in Mulia Hotel, can be a very good alternative. In certain occasions, guests can see directly the process of making noodles. In other occassions, which are called “Spicy Szechuan Cuisine”, guests can enjoy menu with hot taste.

The main themes during this season are sour, hot and tasty. Using fresh food combined with the touches of chilly and spices have made Szechuan cuisines unique and delicious. Apart from the richness in ingredients, food from Szechuan is also rich in the way the food are cook. That is why Szechuan food is also known as ‘hundreds of food with hundreds of taste’. The combination of the ingredients has made people believe that the food from Szechuan can stimulate the sex desire. Apart from the use of ingredients, Szechuan menu also reveals another secret for those aphrodisiac lovers. It’s called abalone, a type of oyster (Haliotis Asinina) with high level of protein.

Just to get the taste of abalone, guests have to pay around Rp 200,000 to Rp 1,000,000. Abalone is then steamed and served with special sauce. You can order abalone in Samudra Shark’s Fin with menu Braised abalone, seacucumber, fakau and black mushroom in oyster sauce.

Guests come to the restaurant also because of the house specialty, shark’s fin. In traditional Chinese medicine books, shark’s fin is not only good for the stimulation of your secret desire, but it can actually prevent skin from aging. Shark’s fin also recommended increase vitality. Apart from all the benefits, shark’s fin itself has magnificent taste as we eat Braise superior shak’s fin with crab meat at Samudra Shark’s Fin.