Between technology and symbol of modern life 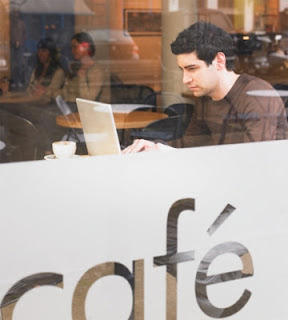 The drizzling rain not only made the streets wet but also caused traffic jams throughout the city. After meeting with a client, Agus Sutrisno, the owner of a graphic design company, decided to drop by at the nearest cafe rather than continue on to his office. His workplace was not that far away, but traffic congestion meant that it would take him almost two hours to reach.

His laptop was on. Suddenly a message flashed in through the instant messenger. The sender was his partner who had an office in Kuala Lumpur. The message informed him that a major company in Malaysia required his services in graphic design for their company profile, brochures, leaflets, etc. A proposal and quotation, the message said, had to be submitted within two days. "This is urgent. I have to respond quickly or I could miss this opportunity," he mused.

Agus immediately contacted his executives via cell phone, messages via BlackBerry and chatting. One executive confirmed that he would lead the creative team in the sales pitch and would determine the estimated cost. Iwan, who is also a senior designer, also started to immediately prepare a dummy for the project while putting together a number of relevant portfolio samples.

Traffic jams no longer daunt Iwan. By using the Internet, BlackBerry and mobile phone, he can address almost every work-related issue. Time and distance are no longer challenges. Yes, laptops and other mobile devices, such as cell phones and PDAs, are not simply requirements of modern life, but are inseparable parts of urban life. It is like having the world at your fingertips.

Mobility among people is supported by new products that are becoming increasingly sophisticated. The iPhone, for example, will be introduced to the Indonesia market early next year. This is the first mobile phone to run iTunes, with one million units sold in the first two months after its launch in the U.S. The new cell phone has a 3.1-inch touch screen and can send email, surf the Net and store and play music, photos and videos.

With the world at people's fingertips through such sophisticated devices, it is no surprise that laptops are such a common sight in public places, such as in cafes. Wireless access provided by some cafes, malls and hotels make mobile work so easy for people with laptops and PDAs. With laptops and PDAs becoming more common, blogging is becoming more common, too, with people being able to communicate anytime, anywhere through wireless connection and 3G telecommunication.

Vendors are working fast to meet the demands of wireless workers and bloggers. Laptops and notebooks are in great demand because of their many benefits, such as the ability to operate without a direct electric connection, lower electricity consumption than desktop computers, features that are equal to or better than desktop computers as well as the prestige it affords a person when carrying a laptop.

Today, if you browse through newspaper ads you will find a great range of laptops on offer, from highly sophisticated expensive ones to simpler ones selling for just Rp 5 million. Every laptop manufacturer advertises, from world renowned brands such as HP, Toshiba, Acer, IBM (Lenovo) and Acer to newcomers like ECS, A Note and Benq.

For those who love to tinker with computer programs or make complicated graphic designs then top-notch processors such as Core 2 or AMD Turion are good choices. However, for simple jobs, like typing, Powerpoint presentations, Excel tables, browsing the Internet or working on Photoshop, the Intel Celeron or AMD Sempron are sufficient. Most are equipped with Wi-Fi access. Whatever type of laptop, specifications and features, what is clear is that a laptop is very much apart of life these days.

The digital lifestyle is a worldwide trend. In Britain, for example, as reported by Ofcom -- which analyzes communications trends -- television, radio and even DVDs have become items of yesterday to be replaced by technology that is more modern. It is also reported that women in a number of age brackets dominate the use of the Internet as well as the older segment of both male and female. Ofcom said in its report that children tend to use the Internet and mobile phones more than in the past, while video games are gradually being left behind. "On the whole, people are using communication services more than they were five years ago," said James Thickett, Ofcom's director of market research.

The report provides a detailed breakdown on how people in Britain use old and new media and how fond they are of using smaller, high-tech electronics. On average, people are spending 50 hours per week on a cell phone, the Internet, watching TV and listening to the radio. However, the amount of time spent watching TV or listening to the radio has drastically decreased in the past few years.

The situation is no different in Indonesia. In 2007, laptops became a favorite among youth. With hotspots available in many locations, including on campuses and in other public places, laptops have become an essential part of the young generation's daily life. Laptops have gradually become an inseparable part of urban life. According to data compiled by detikinet, the total market for PCs in Indonesia is estimated to reach two million by 2009, with 20 percent being laptops.

Students find laptops helpful in their studies. Taking a laptop to university saves time as one does not have to go to an Internet kiosk or rent a computer just to type the required work. Some feel more confident with a laptop as they feel they will not be left behind with the latest information or entertainment. A laptop in fact can provide entertainment anytime.

Nowadays, not only students use laptops, but also executives, writers, researchers, lecturers as well as those involved in graphic design or multimedia work. Obviously, a laptop is not merely a sophisticated piece of equipment but is also a symbol of modern life. (Burhanuddin Abe)