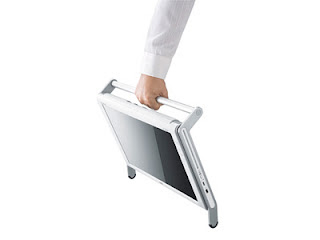 COMPUTERS are inseparable from daily life, with worldwide sales for personal computers (PCs) recorded at 71.1 million computers in the first quarter of 2008, an increase of 12.3 percent over the same period last year.

The highest growth rates, said Mika Kitagawa, an analyst at Clint Computing Market Group Gartner, were recorded in Europe, the Middle East and Africa.has been prompted by the growth of mobile computation in the countries in these regions," he said in a press release.

Growth of the computer market in Indonesia has also been quite high, as revealed by Lukas Lukmana, chairman of the Standing Committee of Multimedia of the Central Java branch of the Indonesian Chamber of Commerce and Industry (Kadin) on the sidelines of the Solo Computer Expo (Scompex) in Solo Grand Mall early this month. He said that computer sales in Indonesia significantly increased from year to year. This is reflected in the 30 percent increase in sales in 2007, with sales projected to increase by 50 percent in 2008.

The computer has undergone incredible development over the years. The earliest computer, made in 1951, was in the form of a vacuum tube. IBM may be considered a pioneer in computer technology. The first computer was huge, but in 1981 IBM announced the launch of IBM PCs. In the first year, some 35,000 computers were sold, increasing to 800,000 by 1982. With such rapid sales growth, IBM personal computers became the standard for the micro industry. When software vendors began to gear their products toward IBM PCs, many computer makers created and copied IBM PCs. These groups were called IBM-PC compatibles and were the reason why most software products were designed for IBM PCs.

The computers available now are of a smaller size but owing to more advanced technology, their processing speed is much faster while their prices are lower. Today's computers, in short, are more efficient compared to computers of previous generations. As the production of micro computers has jumped, personal computer users, who are not professionals in the computer area, now make up the majority of computer users.

To make a computer more user-friendly, many computer companies have developed Graphical User Interface (GUI), which can produce pictures and menus (lists of choices of instructions) which a user can choose with just the click of a mouse. GUI was introduced for the first time in 1984 by Apple and was used in Macintosh. Macintosh has also developed a similar GUI, known under the name of Windows. In addition, most new application programs today are provided with tutorial and quite a broad help menu for new users.

Computer technology continues to evolve, with computers now being much smaller in size and having a faster processing speed but lower prices. They are more efficient than the computers of previous generations. The notebook is part of the revolution. You can carry a notebook, the capability of which is as good as that of a PC or a desktop computer and server. This feature is inseparable from the phenomenon among professionals who work on a wireless basis with the help of a notebook. "The growth of the notebook market is due to the features of a notebook now available and because notebooks have become more and more affordable," said analyst Erica Gadjuli, principal research analyst of Gartner Inc, as reported by Bisnis Indonesia.

Growth in the notebook market is faster than that in the desktop market. This, however, does not mean that desktop sales are stagnant. In fact, makers continue to develop their innovations in terms of computer technology and design. One of these innovations is a hybrid computer. This computer, the production of which was pioneered by NEC, blends the superior elements of the notebook and the desktop. At a glance, this hybrid computer, called the NEC Powermate P5000, looks like any other personal computer but has no CPU. The monitor is easy to carry as it has a handle on the upper rear part.

Weighing just four kilos, the Powermate P5000 does not have a maze of cables but uses just one electric cable. The keyboard and the mouse are wireless, making the computer both functional and stylish. The NEC Powermate P5000 is the first hybrid computer to enter the Indonesian market. This product is also the first hybrid computer to be sold outside Japan. However,obvious is that today the time gap in the launch of a new product globally and in Indonesia is narrowing. Hewlett-Packard (HP), for example, released its global products in Indonesia only two months after they were launched globally.

It is difficult for laymen to guess the direction that computer technology will take in future. We can only marvel at the phenomenal development of information technology in the past decade. The presence of the Internet and the boom in the development of hardware and software technologies have prompted the emergence of computers of a new generation. (Burhanuddin Abe)