The Beauty of Indonesia 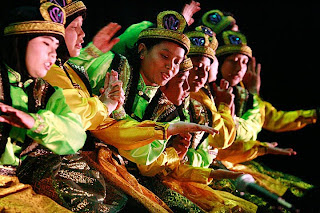 Geographical Position
Indonesia is the world’s largest archipelagic country comprised of 17,508 islands. IndonesiaAsia and Australia/Oceania continents. This strategic position exerts a very strong influence on its cultural, social, political and economic aspects. stretches between 6 degrees of the northern latitude to 11 degrees of the southern latitude and from 97 degrees to 141 degrees of the eastern longitude and lies between the

Indonesia’s territory stretches over a distance of 3,977 miles between the Indian Ocean and the Pacific Ocean. If the waters between the islands are combined, Indonesia will total some 1.9 million square miles in area.

Art and Culture
The art in Indonesia is much influenced by other cultures. The famous Javanese and Balinese dances, for example, contain the aspects of Hindu culture and mythology. Many dances contain the Islamic values. Some of them can be found in Sumatra, for example, Saman Meusukat and Seudati dances from Nanggroe Aceh Darussalam.

In addition, Indonesia’s leather puppet shows, which feature mythological stories, are also quite famous in the world. ”Pantun” (old poetry form consisting of four lines), ”gurindam” (a poem made up of two rhyming lines of equal length) and so forth from various regions such as the Malay ”pantun: and many others are often featured in certain events such as traditional feasts, art performances and so forth.

Meanwhile, in the apparel area, batik craft is Indonesia’s famous cultural legacy in the world. Some regions noted for their batik industry include Yogyakarta, Solo and Pekalongan.

The music in Indonesia, both traditional and modern, is really varied from Sabang to Merauke. Traditional music, including Javanese ”keroncong” is familiar to nearly all Indonesians, but modern music and ”dangdut” are predominant in Indonesia’s musical arena. ”Dangdut” is one type of Indonesian music that has gained great popularity among the people in the entire Indonesia. It is a combination of the elements of Malay, Indian and Indonesian traditional music. The music is called ”dangdut” beause of the prominent ”dang” and ”dut” sound when it is played. Generally, the sound of percussion and the flute are dominant in ”dangdut” music. ”Dangdut” songs are usually sung by the singers by swaying their bodies in a teasing and gentle movement that keeps up with the beat of the song. There are several types of ”dangdut” music, among others ”Malay dangdut”, ”modern dangdut” (today’s ”dangdut music the performance of which includes also the use of modern musical instruments). And ”dangdut pesisir” (traditional Javanese, Sundanese ”dangdut” songs etc.). In 1970s, ”dangdut” was better known as the Malay orchestral music but then in early 1980s this type of music was better known as ”dangdut”.

Indonesia comprises various ethnic groups, religions and beliefs. There are Batak, Karo, Minangkabau and Malay and others in Sumatera. There are five religions that are recognized by the government: Islam, Christianity, Hindu and Buddha as well as Confucianism. Most Indonesians, however, opt for Islam as their religion.


Demography
Indonesians can be categorized in two broad groups. In the western part of Indonesia, most of the people are of Malay ethnic group while in the east they are the Papuans, whose roots can be traced back in the Melanesian islands. Many Indonesians refer to themselves as part of a more specific ethnic group, depending on the language and the region of origin, for example, Javanese, Sundanese or Bataks.

In addition, there are also migrants, who are the minorities, among others the ethnic Chinese, Indians and Arabs. Migrants first came to Indonesia in 8 BC by taking the trade route and since then they have lived in Indonesia and become part of this country. Some 3 per cent of the Indonesian population are the ethnic Chinese. This percentage has come in different versions because it was in 1930 that the government last took a census by categorising the Indonesian people into ethnic groups and their descendants.

Islam is the religion of the majority (85.2 per cent) of Indonesia’s population, therefore making Indonesia a country with the largest Muslim population in the world. The rest of the population are Protestants (8.9 per cent), Catholics (3 per cent), Hindu (1.8 per cent), Buddhism (9.8 per cent) and others (0.3 per cent).