Bookstores are enjoyed by entire families 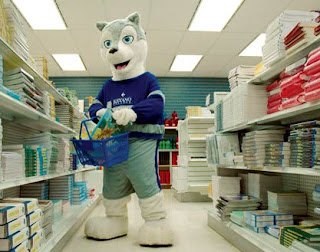 One morning in a bookstore in , , customers leaf through books in a bookstore. The bookstore stands back from the road but is clearly visible. Periplus Bookshop, which is only about 150 m2 in area, has its own attraction. Aside from the vast collection of books, the bookstore has a small cafe. There is no partition separating the "reading room" and "the dining room".

While some customers browsed through the books, others sipped coffee. A Caucasian woman was glued to her chair from morning to early afternoon, enjoying snacks and busily working on her notebook.

On the same road, Jl. Kemang Raya, is Aksara bookstore, which follows the same concept. In the first outlet of the bookstore chain owned by Winfred Hutabarat and Arini Subianto Mamuaya, are various imported books, ranging from literary books to popular books such as biographies of famous people in the entertainment business. The interior design consists of wood, glass and iron in primary colors like red and black.

Since it was first opened in 2001, Aksara Kemang has been a favorite haunt, especially for expatriates living in . Meanwhile, many people from other parts of come here to find imported books that are not available at other bookstores. Although it is mostly known for its imported books, Aksara has books printed in both English and Indonesian.

Some people visit the store not for the books for the cafe and its atmosphere. The interior, which adopts an eclectic style, is unique as it is a combination of modern, traditional and even controversial designs. You can find traditional Indonesian chairs as well as modern sofas.

Interestingly, it is this lifestyle concept that has prompted developers or managements of malls to invite Periplus and Aksara to open stores in their malls. The bookstores and the malls share a common concept, positioning and target market. According to a reliable source, the management of a mall will offer a special rate to some bookstores to entice them to become tenants.

In the past, any mention of local bookstores would certainly bring to mind Djambatan, Gunung Agung or Gramedia. Books about or related to Islam could be found at Walisongo and Media Dakwah in Kramat Raya, . Today, however, bookstores are present in upmarket malls and shopping centers as a reflection of the urban community's lifestyle. Besides Periplus and Aksara, you can also find Maruzen, Kinokinuya, TGA (a trade mark of Gunung Agung) and QB World Books, which, unfortunately, has only one outlet left.

The latter bookstores seem to represent their age: those buying books are not bookworms but shoppers who consider books as items that must be bought just like CDs or fashion items. A bookstore is no longer a place where you can find only books but is also a place where performances are staged and where people hang out. In short, a bookstore not only meets one's need for reading material but it also makes reading a lifestyle.

Interestingly, however, most Kinokuniya outlets in upmarket malls are located next to Starbucks -- both being icons of today's lifestyle. The concept of a bookstore has indeed shifted to become part of a lifestyle of the community, particularly in major cities. Besides being a shopping center, it is also a place where people spend their leisure time, dine out or hit the gym. And one of the places that shoppers like visiting when they go to the mall is a bookstore.

Not infrequently do bookstores become the main destination, although people do not necessarily go to a bookstore just to buy books. Very often they go there just to kill time. "Spending time in a bookstore is quite pleasant and comfortable. You can see many things and then the atmosphere in a bookstore is usually peaceful," said Ita Wibowo, a customer at Periplus Bookshop at Mal Kelapa Gading.

Many families view a bookstore as a place to go for a form of recreation, especially if the bookstore's stock is varied so that the various needs of all the family members can be met. Indeed, parents and children obviously have different needs. The father, for example, may look for items related to office work. The mother may browse through recipe books while the child may look at school or comic books.

It is this concept about a bookstore that bookstore owners are aware of. The basic concept of a bookstore is that reading a book is a cultural habit so that a customer's desire for a book as a means for self-actualization must be met and books must be easily accessible. In their later development, in line with an increasing interest in reading, improving living standards and people's purchasing power, bookstores enjoy a higher status in concept as they have become part of common lifestyle.

While according to the old paradigm, a bookstore sells only books, in line with the present-day concept, a bookstore sells not only books and stationery but also other items such as computers and accessories, office equipment such as desks, chairs, safes, facsimile machines, telephones, attendance machines and so forth. In addition, it also sells sports equipment, school equipment, musical instruments and so forth. While the outlets of Periplus, Aksara and (in the past) QB have their own cafes, TGA Bookstore has a kid's corner, which keeps a large collection of educational reading material for children and where children can play and have fun. This is a corner that contains desks and chairs and where children can read and play comfortably. (Burhanuddin Abe )