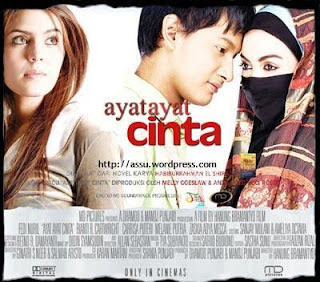 Ayat Ayat Cinta (Verses of Love) is a phenomenon. Since its publication in December 2004, this novel, which was serialized in Republika daily, has sold over 150,000 copies. The film based on this novel was a box office hit and is second to none in terms of the number of viewers.

Of course, not all best sellers become box office hits. But producers in and are always on the lookout for good novels (hopefully best sellers) to turn into films. If such novels are available, at least they won't have to look for a storyline as the novels are good enough to be turned into screenplays. The main idea for James Bond films came from a novel by Ian Fleming. Meanwhile, The Da Vinci Code is based on a best seller by Dan Brown and brought in over US$750 million from worldwide ticket sales.

Prior to the success of Ayat Ayat Cinta, a novel by Habiburrahman El Shirazy, there were several phenomenal titles although they did not sell as many as Shirazy's. Take, for example, Saman by Ayu Utami and then Supernova, an experimental novel by singer-writer Dewi "Dee" Lestari. Another book much discussed was Jakarta Undercover by Moammar Emka, a journalist for an entertainment tabloid. This book, once a hot topic of discussion, was previously rejected by a major publisher. It became a best seller after being published by a small publisher, Galang Press. So, whoever you are, a small or large publisher, an old or new publisher, an established or unknown writer, you may still have the opportunity to produce a best seller.

Interestingly, the cycle of these best sellers has become relatively shorter, just like , which produces box-office films at relatively short intervals. This means that the Indonesian book market has now become an industry with a clear direction, although the market has yet to stabilize. Not only established publishers can reap profits from the flourishing book industry in but new publishers can have a share of the profits too.

This is found not only in . Judo Suwidji, managing director of Periplus, a bookstore chain and importer of foreign books, said there is a big demand for Islamic books. "Perhaps, following the rumors on terror and bombings, people want to learn about the real Islam from the right source," he said.

Indeed, it is not just books on Islam that are enjoying popularity due to their enlightening subject matter. Other books such as Re-Code Your Change DNA (sic) by Rhenald Kasali, 18 Wisdom & Success (sic) by Andrie Wongso and Wireless Kung Fu by Jasakom E. Learning.

If you are observant then you may see books that you never would have imagined as best sellers. For example, recipe, gardening and cattle breeding books. Then there are also comic books. Indeed, manga dominates the book market today. A local comic book titled Lagak Jakarta by Benny and Mice also has attracted a lot of fans.

Indeed, time is a determining factor. There is certain timing that will make certain books sell well. Books about former Indonesian president Soeharto, for example, have been selling well following the demise of this former ruler of the New Order regime. Similarly, books about Barack Obama, a presidential candidate, are in great demand.

However, although feeling is an important factor in the book industry, the article also says that something like a rational assumption is also needed to determine which manuscripts may become best sellers. In fact, whether or not a book becomes a best seller is determined not only by the strength of the manuscript but also by how it is packaged and, last but not least, by the marketing strategy adopted.