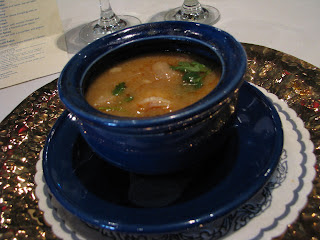 Asian food, with its specific taste, is the favorite of many and can be found in every corner of the world. Thai food, for example, is considered quite exotic with chili and tamarind in most of its dishes.

Indeed the Thais have been quite successful in boosting the popularity of their rich cuisine across the world. Here in numerous Thai restaurants have been mushrooming. Take for instance a new restaurant franchise from , the Blue Erawan, which is strategically located in Menteng, .

The most well-known Thai dish is tom yam soup, which contains more chili and tamarind than the local sayur asam or tamarind soup. The tartness is more due to the lemon juice added to it. Other ingredients in the soup are lemongrass or citronella and coriander leaves. Besides chicken tom yam there are also tom yam gong (with prawns), tom yam pla (fish), tom yam palay (seafood such as squid, shrimp and snapper) and tom yam palai thong (fish head).

Of course, tom yam is not the only popular Thai food. Thai food also blends ingredients and spices from a number of countries, including and , to create its own specific flavor.

You will be delightfully surprised when you explore most streets in , which are filled with restaurants and vendors, for instance Sukhumvit 38, Khao San and Pratunam streets. Among the many delicious dishes are som tum (hot papaya salad), Thai noodles, khao tom pla (fish soup with rice), tom yum talay (seafood soup) and khao man gai (chicken rice).

Some restaurants provide entertainment, for example Baan Thai, Piman Thai Theater and Season, which are located on . Similarly, there is also entertainment at the Royal Dragon restaurant, which according to the Guinness Book of Records is the largest restaurant in the world. You can find it on . If you like a romantic atmosphere then why not have dinner while cruising along Chao Phraya river, which has a splendid view to enjoy while dining with your partner.

can be considered the heart of Asian culinary. In you can easily find many good cooking classes, for example at the at Oriental Hotel, Royal Dragon, , Landmark Hotel, and at the .

If you prefer milder food, then go for the milder and safer taste of Malaysian food. Nasi lemak (rice cooked in coconut sauce), roti canai (Indian bread), laksa (rice balls in delicious coconut sauce with shreds of chicken, prawns and meat) are some of the popular dishes here. In fact, Malaysian food is not that different from its Indonesian counterpart, and rice is the staple of the people in both countries.

A visit to is incomplete if you only go shopping without a culinary tour. Various races live here and therefore the food of the country is also rich in choices and ingredients. Basically there are three types of food in MalaysiaMalay, Chinese and Indian, each with its own specific taste. There are also mixed race food, such as Nyonya and Muslim Indian. International cuisine, including , is also available in 's major cities.

Malay dishes are characterized by the coconut sauce and rather bold spices. However, Malay food tastes slightly different in each part of the country. Nyonya dishes, which are a mixture of Malay and Chinese flavor, have a combination of sweet, sour and spicy. Otak-otak (grilled fish with rice wrapped in leaves) and tim bebek (steamed duck) are examples of two popular Nyonya dishes.

Nasi lemak, served with vegetables and fish, can be found in almost every corner of the country, while the price is not too high at RM 15 (about Rp 37,500). If you desire more Malaysian food you can find it in at Mid Valley Megamall, which is located in Mid Valley City, Lingkaran Syed Putra. Here at the Ayam Nor restaurant you can savor various dishes, including nasi lemak ayam golek (nasi lemak with chicken), nasi ayam daging rendang (rice with chicken simmered in spices and coconut milk), mee rebus Johor (Johor noodle soup) and mee muar ( noodles muar).

Meanwhile at Suria KLCC (), located at the lowest part of the , you can find many restaurants and food stalls. On the fourth floor there are also various Asian restaurants. What is interesting is that the waiting staff are mostly Indonesian. The Chow Kit area is more Indonesian with its numerous restaurants and jamu stalls. The menu here is very similar to those in , and the area is often referred to as town.

Fancy some Indian food? Then visit on Jl. Tun Razak, which has an excellent menu and service. The food here is mostly Northern Indian, which is not as hot as Southern Indian food. Another choice for authentic Indian food is Restaurant on Jl. Telawi and The Taj at Crown Princess Kuala Lumpur. So, are you ready to go on a food adventure that will tickle your taste buds? (Burhanuddin Abe)