Rushing into the LCD monitor market 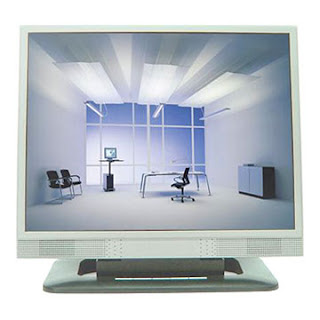 LCD (liquid crystal display) monitors are currently the choice of many customers as the price is becoming more reasonable. They are also more practical and efficient. The pictures produced are also more satisfactory and do not tire the eyes quickly. So, LCD monitors are actually healthy for your eyes compared to CRT (cathode ray tube) monitors.

It is important to know how CRT monitors works. It shoots electrons 65 to 85 times every second that are multiplied three times due to the three color spectrums (red, green and blue). So, soon your eyes have to work very hard and get tired in no time.

There is no such risk with LCD monitors as they use liquid crystal and backlight without shooting electrons. Its thin design makes it possible to be placed at an ideal distance. Therefore, for those who work on computers for hours every day, LCD monitors are an excellent choice.

A perfect example of such a monitor is the Samsung T190. Its exterior design is smart with rounded corners and button less screen. It comes in three colors - Rose Black (Red), Emerald Black (Green) and Sapphire Black (Blue). It is also an energy saver.

Indeed, LG Electronics Indonesia not only manufactures reliable home appliances and cell phones, but is also a market leader in flat computer monitors and LCDs.

BenQ, meanwhile, has its own special strategy. It strives to make world standard LCD monitors and is innovative in every aspect. Its monitors are the most accurate and the fastest, and were the first in the world to be certified by Vista recently. Other manufacturers of LCD monitors are Acer and ViewSonic.

With its flat screen, most manufacturers are rushing to produce some of the best designs for monitors. One such company is Dell Incorporated, which is headquartered in Round Rock, Texas, the U.S. and was established by Michael Dell. Dell, which is number one in its field and has overtaken the position of Hewlett-Packard, has some unique features that no other company has. Dell is able to administer its inventory system accurately and can supply any customer anywhere in the world on time.

So, it is not surprising that the company can produce LCD monitors that are not only attractive but also competitively priced. Some of Dell's products are made by companies based in China, Taiwan and South Korea. The situation in the market, however, is quite tough, as all manufacturers have joined the bandwagon and started to produce monitors that either has sufficient or a wide range of features. The prices also vary.

What is becoming most popular is the wide screen monitor. The latest data from DisplaySearch shows that the sales of wide screen monitors in the first quarter of 2007 increased 40 percent from the last quarter of 2006. The 19-inch monitor took third place for sales worldwide, overtaking the 15 inch. Its total sales reached 5.8 million units. Number one in sales is the 17 inch monitor, while number two is the standard 19 inch screen.