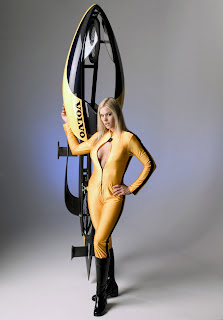 The Association of Indonesia Automotive Industries (Gaikindo) is again staging the most prestigious motor show, the 16th Indonesia International Motor Show 2008 (IIMS 2008), at the Jakarta Convention Center (JCC), Senayan, , from July 11 through July 20.

This yearly event, which is supported by the International Organization of Motor Vehicle Manufacturers, is a splendid opportunity for manufacturers to exhibit their superior products, especially ones that incorporate eco-technology for a better and cleaner environment to create a more comfortable life.

IIMS 2008 carries the theme "Advanced Motoring, Hi-Quality Living", which reflects the commitment of local manufacturers to develop innovative vehicles that are environmentally friendly. This also means a commitment to the technology used as well as the raw materials for the vehicles. All this is in line with the global agreement during the 13th COP/MOP United Nation Framework Conference on Climate Change (UNFCCC) held in Nusa Dua, , late last year. "Overtime, the automotive industry has come to care greatly about the environment and its preservation, especially considering global warming and climate change that affect human life. Bearing this in mind, it is only natural for us within the automotive industry to care more and actively participate in environmental preservation and help reduce global warming and its effects," said Bambang Trisulo, the chairman of Gaikindo.

Johnny Darmawan, the event's organizing chairman and a Gaikindo deputy, noted that the domestic automotive industry was a vital engine in boosting the national economy. The industry has a long chain of manufacturing and sales as well as distribution process, manufacturing of components and vehicles, distribution and after sales service that include authorized and unauthorized service stations, sales of spare parts. The industry has also developed related business, like financing and insurance. "Clearly the entire chain creates jobs for a great number of people, which is a huge contribution to the public in general," he added.

So, again this year's IIMS is expected to boost enthusiasm among domestic players in producing and exhibiting their superior products. With various hurdles, such as the increase in fuel prices and interest rates as well as inflation, the industry has survived well and is in fact in high spirits. "In the first six months of this year, sales have reached 290,000 vehicles, which is higher than the set target, while the export figure is also good, more than 50,000 units. With the world recession and increasing fuel prices, we at Gaikindo are still optimistic that this year's target of 520,000 units will be achieved as well as 100,000 units for export," said Bambang Trisulo

Gaikindo data shows that the automotive industry is the country's forth largest taxpayer among industries. The rapid progress of the industry has attracted a number of foreign investors. Eager to capitalize on the industry's growth, manufacturers and component distributors from , and are also participating in the motor show.

IIMS 2008 is also participated in by 18 sole authorized agents (ATPM) and 121 non ATPM participants. Meanwhile, three players are absent, namely BMW, General Motors and Renault. The absence of these manufacturers has not disheartened other participants. PT Honda Prospect Motor (HPM) has a special theme for the event, "Life and Technology in Perfect Harmony".

Yukihiro Aoshima, the company's president director, said the theme aimed to raise awareness about future demands for products that are able to make life better and preserve the environment.

Honda is taking up the largest space in the Cenderawasih room, which is 2,152 square meters in area. The design here is experimental and innovative with a landscape of an environmentally friendly city.

This year's IIMS has been totally revamped, while at 60,000 square meters the area occupied is much larger than last year's, which was only 48,000 sq. m. Other new facilities are a food court, Internet access for the public and a shuttle bus service from JCC to Plaza Semanggi, and Plaza Senayan.

The largest motor show will also be enjoyed by students from a number of selected schools and disabled people on dates set for Children's and Student's Day and visits for the disabled. Meanwhile, some activities have already started, such as the 4th Automotive Design and Styling Competition and the Writing Competition for Journalists. In line with the environmental theme, Gaikindo planted trees as part of the regreening program on the Jakarta-Cikampek toll road at kilometer 5.8 on June 30. For children, meanwhile, it held the Children's Coloring Competition from June 8 through 15.

With such activities, Johnny hopes IIMS 2008 will not be seen as merely an automotive show, but also as information and education medium on the industry, and most importantly evoke the spirit of environmental preservation in each of us. Johnny said the event's organizer expected transactions during the event to exceed last year's Rp 2 billion (about US$216 million). He added that with all the new programs and facilities, the number of visitors is expected to be higher than last year's. This year's visitor target is 220,000. (Burhanuddin Abe)