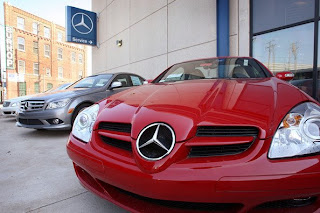 The streets of Jakarta are never void of luxury cars. These cars are characterized by their attractive shape, reliable technology and the maximum comfort that they offer. Indeed, the luxury car market in Indonesia will never die. At the Indonesia International Motor Show (IIMS) 2008 at the Jakarta Convention Center (JCC) in July, luxury cars like BMW, Jaguar, Bentley, Rolls Royce, Daimler, Subaru, Mercedes-Benz, Volkswagen (VW), VW Caravelle and Audi attracted lots of attention.

Mercedes-Benz displayed convertibles of the SL350 series and was successful in sales. These two-door convertibles are of the roadster M-Benz SL class, have a 3,498 cc engine and sell for Rp 2 billion. This high price did not put off buyers, though. The German carmaker sold 42 these luxury cars at the show. Of this number, 27 were of the C Class and 13 were C 280 AVGs.

According to deputy director of marketing of PT MI, Yuniadi Hartono, up to July this year, Mercedes-Benz cars controlled the premium automobile market with a 68.3 market share. "In the first semester of this year, total sales stood at 1.494 units. We have a sales target of 2,400 units for this year," he said.

While carmakers of medium class and below vehicles are busy preparing energy-efficient technology to overcome fuel price increases, premium cars, which usually have 3,000 cc and above engines and therefore are not fuel efficient, continue to survive in their market. Mercedes is just one example. German cars VW and VW Caravelle are also favorites among luxury car buffs. Although prices are high -- a VW Tiguan, for example, costs Rp 675 million on the road -- they sell quite well. "There is quite a strong demand for Tiguan in Indonesia but, unfortunately, stocks are not enough to meet the demand. Only 80 units are allocated for Indonesia," said Andrew Nasuri, CEO of PT Garuda Mataram Motor (GMM).

In the class of luxury cars, European automobiles seem to remain the favorites. European cars have a number of superior aspects such as product quality and technology. Consider, for example, cars using alternative fuel such as hybrid, fuel-cell and electric cars. European carmakers, on average, offer the superiority of technology in their products, particularly with respect to passenger safety.

That's why, Volvo, for example, despite its smaller "population" compared to Mercedes and BMW, has its die-hard fans. These fans can enjoy the facilities that Volvo provides, such as The Volvo Center, which monitors the development of this particular make and organizes integrated discussions through a membership system, and the 3S (showroom, service and spare parts).

Meanwhile, viewed from the producer's side, these facilities look promising as the producer can promote the superior elements of Volvo and expand its franchise network. These facilities also symbolize the exclusiveness of Volvo users. While Volvo is associated with being an "official's car", Ford represents dynamic and, of course, exclusive executives. This year, PT Ford Motor Indonesia launched the New Ford Focus of 1.8 Comfort type, which sells for Rp 211.5 million. This sedan measures 4.448 m x 1.840 m x 1.454 m and has 16-valve Dureatec HE, IL4, DOHC engine capable of producing 130 HP/6,000 rpm with a torque of 16.8 kg/4,000 rpm. This five-seater has a five-speed manual transmission.

Another top product is the Ford Verve, which has four doors and is kinetically designed. Director of executive design of Ford, Martin Smith, said the Ford Verve was the result of a study that Ford conducted to explore how far a kinetic design could be applied in a small car. This car has four 18-inch wheels of the 12-axle rim model, an element that adds to the gracefulness of the car. A line is found on the side of the car's body and on the upper side and lower side to reinforce the robust impression of a Verve.

Although European cars have various superior qualities, it does not mean that they lag behind. The Toyota Camry, for example, has become a car to reckoned with in the premium car market. Not only is the Toyota brand famous the world over but this particular variant has helped make this car a favorite. The features it offers are of the premium class that are only found in a big luxury sedan. Other top features that can be found in this sedan are the MID (Multi Information Display), Cruise Control, an audio button on the steering wheel and keyless entry.

There are two choices of engines for this sedan: 2400 cc with a power of 167 dk or 3,500 cc with a power of 277 dk using dual vvt-i technology. So when the sedan is driven, the power and torque produced is in balance with the weight of the car. The car is nice to drive thanks also to its stability and excellent balance.

Although luxury cars are omnipresent on the streets, the CEO of PT Garuda Mataram Motor, Susilo Darmawan, believes that the premium car market in Indonesia still has room for growth. Although the local economy is not too good, the sales of premium cars worth over Rp 500 million per unit are not declining. Growth reached 12 to 20 percent this second semester. There will always be people who like large-engine cars that provide not only driving comfort but, more importantly, prestige. This means that no matter what condition the country is in, the premium car market will never die. (Burhanuddin Abe)