Going as far as Singapore in apartment hunting 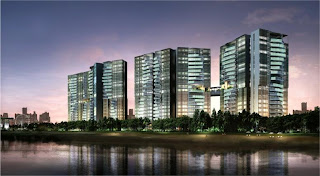 THE needs of urbanites have led to the springing up of serviced apartments. This is a trend that is emerging in major cities in the world, including . Take, for example, serviced apartments like The Plaza Residences, Shangri-La Residences, Aston Rasuna Residence, Oakwood and many others. Built under the concept of condominiums, they are managed by a third party, just like the management of a hotel.


Another example is Shangri-La Residences, an apartment building launched in late May this year. This luxurious apartment building, managed by Shangri-La Hotel and designed by Hirsch Bedner Associates of Hong Kong, is made up of two towers -- the and the . Each tower has 54 two-bedroom apartments measuring 180 square meters and 54 three-bedroom apartments measuring 327 sq m. There is also one garden residence with direct access to the lobby and two penthouses measuring 938 sq m, complete with private swimming pool and garden.

This apartment building located on Jl. Sudirman uses a personal intercom camera system, with occupants able to enter their apartments only through a lift and private door. "With this high-tech security system and other supporting facilities, the residence will feel safe and comfortable," said Miguel Feurmann, property manager of Shangri-La Residences, .

Meanwhile, according to Ratu Neilla, the general manager of the Plaza Residences, most of the clients of this condotel, which became officially operational in mid-1998, are expatriates, particularly Japanese. "Nearly 75 percent of our tenants are Japanese. That's why the facilities are suited to their needs. The clinic here, for example, has a Japanese doctor. The restaurant and other facilities also tend to cater to the needs of the Japanese," she said.

Investment? It seems that the majority of Indonesians who buy apartments do so as an investment, not only in but also abroad. is a fine example of how Indonesians enthusiastically buy property, particularly strata-title apartments. In , property may be owned by foreigners, and it seems Indonesians property buyers are a force to be reckoned with. Data compiled by 's Urban Redevelopment Authority (URA) and Savills Research Consultancy show that Indonesians control 20 percent of the 25.7 percent of the property owned by foreigners in . Chinese and Indians control 14 percent each.

Far East Organization (FEO) is a Singaporean developer aggressively offering apartments to foreigners, including Indonesians. As the largest private developer and one of the largest local companies in , FEO has completed some 700 construction projects since 1962. At present, it is engaged in around 40 projects in various stages of construction, such as residential projects in Bukit Timah (Floridian, The Greenwood), East Coast (Silversea), around (Miro, Vida, Boulevard Vue and Orchard Scotts).

Built on a plot of land measuring 218,435 square feet, Silversea blends the beauty of a residential estate in a contemporary coastal resort style with easy access to the center of activities in . "Silversea's strategic location offers a new experience in life, work and entertainment," said Chia Boon Kuah, chief operating officer, property sales of FEO.

Silversea is indeed a very ambitious project. The design team is made up of DP Architects and KKS International. The former is a leading architectural consulting firm with an international network in seven countries that has won various citations for designs, for example for the Esplanade - Theatres on the Bay, the new National Library and Dubai Mall, while the latter is an interior design specialist located in Japan.

As Silversea is an elite residential complex, the facilities must certainly be complete, ranging from tennis courts, two 50-meter-long swimming pools and four dining pavilions each with their own unique theme. There are also several cabanas in which to enjoy breakfast and spa villas with Balinese or Japanese style that pamper occupants with their luxurious facilities.

The four tower, 21-story Silversea will not be just a luxurious apartment complex when its construction is completed in three years, it will also be an iconic landmark in 's . This tower will be covered with glass to allow the occupants to enjoy the panorama of the sea and the horizon from all directions. Each apartment will have a balcony.

Chia hopes that 50 percent of the buyers will be foreigners. This expectation is not unfounded because what FEO is offering is a superior property product while itself is like a magnet that attracts many people for a variety of reasons. is one of the most dynamic countries in the world. In 2007, the value of fixed asset investment in exceeded S$10 billion. The country's economy has been growing at an average rate of 6 to 7 percent annually since 2004, and this year, despite the tumbling of credit value, its growth rate remains at 4 to 6 percent.

Following the arrival of skilled workers and wealthy people -- foreigners now account for 25 percent of 's total population of 4.6 million -- it is only natural that the demand for houses has also risen. In the first half of 2008, foreigners bought about 30 percent of the property with a proprietary right. Most buyers are from but now buyers from , and are increasing in number.

is indeed a small country, being no larger than . With limited land being available, Singaporeans' creativity and innovation seem to be limitless. When it became no longer possible to build landed property, they started building upmarket high-rise residences. is noted for its beautiful coastline so the higher a condominium goes, the higher the price.

According to Nobelson Santo, an investor from , investing in real estate in is quite safe and attractive because there is no currency or income tax constraints and the profit can be easily remitted outside . "Also, there is no withholding tax on the completion of a property project. Plus foreigners can purchase private land almost without limit," he said. Are you interested? (Burhanuddin Abe)