Processed foods, practical at any moment 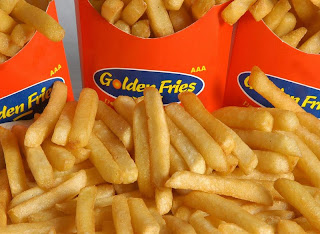 On the other hand, the availability of foods such as chicken nuggets at least give an option to parents who often feel confused when it comes to choosing the right food for their children, especially since they can be frozen and are easy to prepare. Just let them thaw out and fry them before serving. In less than a quarter than an hour, this practical dish is ready to eat.

Most people don't realize how much a part of our lives processed foods have become. Compared with fresh foods, processed foods are practical to serve and are readily available. When confused about what dish to cook, a processed food will surely come to mind. When there is nothing to eat, then tinned food may be your choice. The same is true when you feel lazy to cook or you are hard pressed for time. Tinned food is also helpful in emergencies, for example when there is an emergency or when you have outdoor activities or even when you don't have time to go shopping, or when guests drop in unexpectedly.

There is an increasing number and variety of tinned food and beverages on the market, packaged in sterilized tins and containers. On the one hand, the presence of a greater variety of tinned products is good news for housewives and, certainly, their husbands. Tinned food can usually be kept for a relatively long time. There is no strict requirement about how they should be stored. Besides, the distribution network is wide so tinned food is readily available.

In Carrefour, for example, processed foods are easily found, ranging from the main ingredients of certain dishes to instant and practical ingredients. Carrefour, a hypermarket with the largest network in , for example, offers about 200 kinds of tinned food. "Most are locally produced. Only a few are imported," said Irawan D. Kadarman, corporate affairs director of PT Carrefour .

There are many kinds of tinned foods, ranging from beef, crab meat, shrimp, vegetables and cereals. Just take a look at the shelves at Carrefour and you can easily find pate, crab meat, chili with beans, corn, asparagus, vegetarian mock duck and many others.

In a recent seminar in , Thomas said the national processed food industry continues to grow. In 2006, growth of the food industry stood at Rp 330 trillion. In 2007, growth was recorded at 10 to 15 percent and this year it will grow by at least 15 percent. "This growth is attributable to the fact that there are a lot of farmers that first process their harvest output before selling it," he said.

In line with this, the export of national food products has also risen. In 2006, for example, the value of food exports stood at close to Rp 2 trillion, and in 2007 the value exceeded Rp 2 trillion. In 2008, the export value of these commodities is expected to reach Rp 2.2 to 2.3 trillion. The food industry has strong resilience as everyone will certainly improve the quality of their food before anything else. "Even when there is an economic slow down, people will continue to eat," he said.

Here are a few tips from the Director for Food Inspection and Certification at the Food and Drug Supervisory Agency (BPOM), Tien Garhni. First, a food product that has passed laboratory testing and gained the approval of BPOM will have the inscription of on the packaging, followed by the code "MD", which means the product was domestically produced, or "ML", meaning the product was produced abroad. This code will be followed by a 12-digit licensing number.

As quoted by Kompas, Tien Garhni added that if a consumer should find a foreign product bearing the code "MD", this would mean that this product was made at home and was declared fit for consumption. "Products carrying the same brand names but produced in are safe to eat," Tien said.

Second, consumers must be observant and check the expiry dates of tinned products. For monthly products, usually the expiry date, month and year are given, while yearly products only have the expiry month and year only. Third, it would be better for the public to avoid buying packaged food and beverage products carrying a foreign language, especially if they do not carry the inscription and the ML code to signify that they are imported products. And fourth, be alert over packaged food and beverages that have damaged packaging. Replace them or just don't buy them. (Burhanuddin Abe)