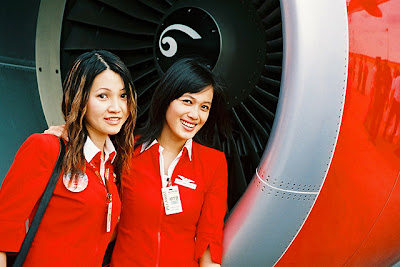 AIR ASIA, a leading low-cost airline in Asia, recently made yet another surprise move by offering free seats to Singapore, departing from Malaysia, Thailand and Indonesia. This scheme was introduced in the context of marking its presence on this popular route with a direct flight to Singapore from various points in ASEAN, including Kuala Lumpur, Kota Kinabalu, Kuching, Phuket, Bangkok and Indonesia's Pekanbaru.

Of course, surcharge, airport tax and administration fees still had to be paid. The first 1,000 passengers to successfully book their free seats online were also entitled to an RM20 E-gift voucher. The online program was from Oct. 29 to Nov. 2, while tickets are for between Dec. 1, 2008 and July 31, 2009.

"We are thrilled to be adding frequencies and introducing new services to Singapore, and giving out free seats to our guests is the perfect way to share our excitement with them. It also further demonstrates our commitment to making air travel convenient and affordable for everyone," said Kathleen Tan, regional head of commercial AirAsia.

AirAsia is indeed known for its low-cost air trips in the Asian region. Headquartered in Kuala Lumpur, this airline has gone ticketless and sells unassigned seats. Just like other low-cost carriers (LCC), AirAsia does not provide passengers with food or beverages. This is one way to cut unnecessary costs.

AirAsia is only one of a number of airlines implementing the LCC concept, which has become a trend. This concept began in the U.S. before it spread to Europe in the early 1990s and then elsewhere. The term low-cost carrier refers to an airline whose operational costs are lower than that of a conventional airline. "In times of recession, several carriers are facing financial difficulties and some are even facing bankruptcy. I hope that the recession will not spread to Asia," said AirAsia Indonesia's marketing and distribution director, Widijastoro Nugroho.

Definitely, the presence of airlines that implement the LCC concept have an opportunity to develop. "People always travel no matter what the circumstances, which drives them to think smart and choose a low cost carrier," he pointed out.

Low cost does not necessarily mean inadequate service. "Even AirAsia, for instance, dares to give an On Time guarantee for flights delayed by more than two hours, meaning that the Malaysia-based carrier will pay Rp 500,000 to passengers for long delays," he said.

Characteristically, an airline implementing the LCC concept provides only one class of seats. The aircraft used is usually either Airbus A320 or Boeing 737. These aircraft are efficient and therefore the cost of training and services can be reduced. The routes taken are simple as they are focused on transit points, not transfer at the centers, which may increase aircraft usage and remove any disruptions caused by delays on the part of passengers or by baggage loss. As for the ticketless concept, it is intended to cut costs, while introducing unreserved seats is intended to encourage passengers to board early and promptly.

The presence of LCCs has created many opportunities for other related companies. This type of airline does not have its own maintenance facilities, and as such is conducive for businesses that provide supporting services such as maintenance and repair work.

On the other hand, LCCs enjoy infrastructural support with the presence of companies offering maintenance in various countries. From the perspective of an LCC operator, the development of an airline is also coupled with the accumulation of experience so that in the purchase and maintenance of aircraft they use new methods.

The flourishing of LCC flights will also encourage the development of airports, and this will naturally be followed by the need for new airport equipment. China, due to its economic growth, will see the construction of nearly 100 new airports in the next seven years. It is also predicted that India will experience the same growth. Other Asian countries are likely to follow suit, except in the event of a worldwide recession or major terrorist attack.

As the fares are very low, the LCC concept can be quickly accepted by the public. It has developed fast, overtaken traditional operators and seen fierce competition between LCCs. Indeed, some people have the misconception that by reducing costs, LCCs compromise on safety.

However, the deputy chairman of Indonesian National Air Carriers Association, Samudra Sukardi, said LCCs could not be faulted when it came to air safety. He said Southwest Airlines in the U.S., which is a pioneer of LCCs, is still in operation and has become the most profitable airline. "None of its aircraft have been involved in air crashes," said Samudra, who is also president director of Pelita Air.

Obviously, international airlines are very interested in entering the Indonesian market. In fact, as the Open Air policy will come into effect in 2009, many foreign airlines are getting ready to tap the potential in the domestic flight routes in Indonesia. However, the financial turmoil in the U.S. and its global impact have seen a number of foreign airlines experience financial trouble.

Indonesia has experience growth in air travel. If the country's political condition becomes more stable and business activities increase, air transportation will flourish even further. In such circumstances not only will LCCs win more customers but major airlines now being pushed back by LCCs will be able to win back former customers. (Burhanuddin Abe)