SUVs still the favorite in the market 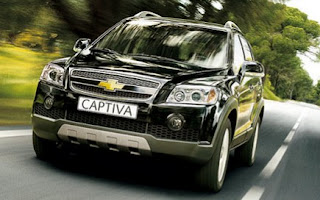 THE competition in the SUV high-end segment is still quite stiff nowadays although the total market is relatively small -- only a few thousand units. Each brand offers various models with elegant designs and a wide range of facilities. While Multi Purpose Vehicles (MPV) are often referred as sedans, the current SUVs, especially the high-end ones targeted at the upper class, are often described as a sedan in the form of a jeep.

The competition is actually quite new due to a recent government decision to allow importers to bring in completely built up (CBU) vehicles, although previously some importers had already done so without such a facility from the government.

This recent development has given major importers, the opportunity to import and market their SUVs here, especially for European cars. BMW, for example, has introduced a BMW SUV with the luxury that is specifically BMW and GM has introduced its All New Chevrolet Captiva Diesel. is even offering a number of models like its Land Cruiser, which has been in the market for some time, followed more recently by Toyota Harrier and Lexus, both of which are also luxury cars. Mercedes has also brought in its latest type of Grand Cherokee Jeep, which is a medium size SUV like Ford Explorer that incorporates off-road features comparable to those of upscale Land Rover LR3.

The competition in this segment is indeed unique, because the new models and brands have not reduced the number of customers of existing SUVs, but in fact the segment has grown in size and drawn totally new buyers. Some even say, quoting a local proverb, that the market of SUV is like a well with an endless source of water. It is not surprising, therefore, that quite a number of manufacturers and importers have joined the bandwagon in marketing their SUVs in .

Honda CRV was the first brand coming from a major maker in the SUV segment launched in the middle of 2000. The next year, 2001, saw the entry of Nissan's XTrail as well as KIA's Sportage, which was first introduced as a vehicle used by the Medan Car Rally committee in 1995. Shortly afterward, other brands like Suzuki Escudo, Ford Escape, Mazda Tribute and Hyundai Tucson followed. After a couple of years Nissan succeeded in overtaking the market position and domination of Honda CRV, which had been enjoying the middle class SUV market so far.

What is interesting is that diesel SUVs are also in demand as diesel fuel is relatively cheap. According to Harry Yanto, Business Manager of PT General Motors AutoWorld Indonesia (GMAWI), the demand for the company's Chevrolet Captiva that uses gasoline, which used to be more than a hundred units, has decreased within the last few months since this GM authorized agent released a diesel variant of Captiva in April. "The demand has turned in the other direction, meaning about 120 units of diesel Captiva per month while the gasoline-fueled Captiva only sells about 100 units," he said as quoted by Bisnis .

Besides the less costly fuel, the growth in popularity for the diesel version is because the target market consider Chevrolet Captiva Diesel 2.0L VCDi to have more power, which is generally characteristic of diesel engines.

GMAWI markets the gasoline automatic transmission model at Rp 292 million, while the gasoline manual version's selling price is Rp 262 million. The diesel Captiva is marketed at Rp 292 million. The automatic transmission version for the diesel Captiva is not available at the moment. In , Captiva, which is the backbone of GM's sales, faces tough competition from Honda All New CR-V, Nissan X-Trail and Toyota Fortuner.

Not wanting to miss out, Audi has also come up with a diesel variant, the Audi Q7 3.0 TDI, that carries a price tag of Rp 1.5 billion. It has a 3.0 liter engine that incorporates 233 hp with a 500 Nm torsion. Previously the company had launched its gasoline version, the Audi Q7 4,2-liter. The diesel variant has a number of superior features, such as a third generation common rail fuel injection system with a piezo inline injector that controls the amount of diesel fuel in combustion. It also has a turbocharger with variable turbine nozzle geometry located in the V6 engine to enhance the vehicle's performance.

Presently this V6 engine is the lightest of its type, while its air intercooler with double charge functions fully. Meanwhile, its diesel catalyzed soot filter fulfills the requirements of the Euro-IV Emission Limit. Audi Q7 3.0 TDI Quatro tiptronic can produce an acceleration of 0-100km per hour within 9.1 seconds, while the top speed is 210 km per hour. The diesel fuel consumption is 10 km per liter and the vehicle has a fuel tank capacity of 100 liters. With this amount of diesel fuel it can travel from to , which is 952 km, without refilling on the way.

Gunadi Sindu Winata, president director of Indomobil Group, said that the automotive market in is now waking up from its slumber and he predicted that about 520,000 units will be sold by the end of 2008. The company's Audi Q7 3.0 TDi has to compete in the high end SUV niche, which is only about 8 percent per year of the total market.

Until now there is no clear explanation as to why the SUVs, including the premium ones, are so popular here, although the price range of even the middle class SUVs is between Rp 200 and Rp 250 million. Some marketers say that the floods that often ravage the country during the rainy season is one of the reasons behind the growing popularity of SUVs which have a high ground clearance. Others are of the opinion that potholes on many of 's roads are pushing customers to opt for SUVs to avoid damage to their vehicles. Others suggest that the high position of its driver's seat makes the driver more confident. Another theory is that the SUV's sturdy design appeals to the macho driver. The real question now is will the SUV market in keep on growing or slowly diminish in the future? (Burhanuddin Abe)