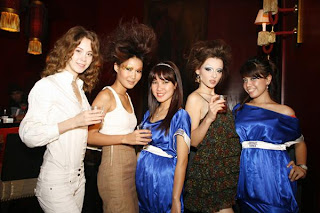 THEMED “The Final Thursday Industrie-Red Carpet Affair,” Dragonfly threw a spectacular bash last Thursday night presented DJ Jayo and DJ Rama as well as fashion show by Jakarta’s socialites.
The idea of inviting a number of socialites to stage at the party is a reflection of Dragonfly as a nest for sociable character people who appreciate the art of living, according to Amanda Putri, the club’s marketing and promotion manager. Pointing at the crowd, she exclaimed, “It’s another one of a kind happening event!”
Indeed, socializing with people from different walks of life accompanied by clubby soundtrack of funky house put the crowd in a jovial mood. The Thursday night’s event was interesting in a way that the club designed the party to fit those whose career are in the field of industry like that of fashion, law, music, telecommunication, banking, oil and gas, to name a few.
Nevertheless, quite a few guests from non-industrial career background were seen at the event owing to the club’s hot spot. “Spun by talented DJs, the music really elevates me. And if it gets too loud, you can just simply move to the restaurant side for a chill out,” Ade, one of the guests, told The Jakarta Post. “Or go to the right side to jam on the dance floor.”
To deliver the best quality of dance music, Dragonfly has hosted a myriad of world-class DJs and acclaimed entertainers such as DJ Nixon and Louie Vega, respectively.
Situated at Graha BIP building on Jalan Gatot Subroto has since last year reincarnated into becoming a smarter looking venue. After being renovated, the hottest restaurant and lounge are conjoined so as to provide a night-out experience to the fullest. Having the concept created by the Ismaya Group, Dragonfly serves a variety of well-designed menu that allows visitors to have the taste of both east and west. In addition to serving the savory modern Asian cuisine, the restaurant at Dragonfly includes tapas menu of Spanish and Canadian. Nevertheless, the food has the strong influences from the Indochine region with the taste of sweet, hot, sour and salty. Deep fried marinated calamari and sweet and sour orange stir-fried dory fish are among the menu’s favorites.
Along with the menu to tickle the visitors’ palate, an array of selected wines and seductive Asian cocktails are lined up to boost the spirit. With the special Thursday all night long, visitors can get great deal for selected wines. Dragonfly Martini and Grilled Lime Mojito are respectively among the club’s drink signatures and stick drinks. “But you should try the long and powerful cocktails on the list like One Night Stand and Illusion,” Michael, an expatriate from an oil company suggested adding, “Sipping a glass of wine while enjoying egg croquette tapas in a Dragonfly’s lively relaxing ambience creates a vibrant lifestyle.”
Awarded one of the top ten design bars by an acclaimed media, Dragonfly has created a unique decoration that can be described as modern Asian elegant, though many will agree with the term “avant-garde.” Embedded within the club’s contemporary wall lighting is an alluring leaf patterns, an essence of Asian influence of vintage old wood and seductive translucent lightning. The Dragonfly’s main dining is centered on a lighted long communal table that represents the sharing concept of Asian dining. The smart high-ceiling lounge bar, moreover, functions as a chill out cocktail bar in the early evening and a red hot party venue at late night.
The club’s leveling floor’s structure is unique, leaving a sense of being spacious that paves the way for easier access to mingle among visitors. Moreover, the club’s cavernous space ideally supports the club’s positive aura of being the stylish sophisticated club. Ever since its establishment in 2004, Dragonfly has won the heart of cosmopolites ranging from socialites and celebrities to executive and expatriate as well as youngsters and people with sociable character.
Weekender, May 2009
Posted by Burhan Abe di Sunday, May 10, 2009