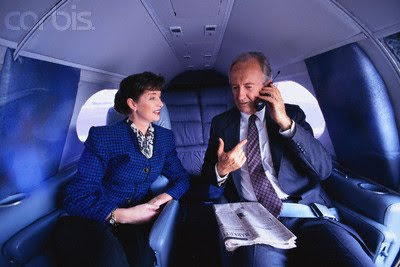 EACH time we board a plane we hear the announcement: "Turn off your cell phone when on board the plane."

This is one of the reasons why the British Civil Aviation Authority (CAA) forbids the use of cell phones on board as a cell phone frequency can create significant errors in the display instruments and disturbing sounds on the pilot's radio. Even on a standby mode a cell phone still radiates electromagnetic signals and the signals become stronger when the base transceiver station (BTS) is connected with another cell phone for a call or an SMS.

Soon, with an agreement issued by the European Aviation Safety Board, passengers on Airbus, which is equipped with the On-Air system, can use their various cell phones for calls, SMS and e-mail while flying.

The first airplane with this system is the Airbus A318, which will be operated by Air France. British airline BMI, Portuguese airline TAP, as well as Ryanair have also signed an agreement to provide the On-Air facility, which has been developed jointly by Airbus and SITA, a communication service company.

For the time being the facility will only be available in a number of European countries, but soon it will most probably be expanded throughout the world. As a matter of fact, a facility similar to OnAir, which is not the first one in the world, has been made available by Airbus competitor Boeing, which is being called Internet Connexxion. However, this facility was later discontinued as there was little demand from passengers so business wise it was not so profitable.

In Indonesia, Indosat is the first operator to provide such facility for its subscribers when flying to foreign countries through a service called AeroMobile. For the time being only Indosat's Matrix subscribers can enjoy this facility when they fly on Emirates Airlines and Malaysia Airlines abroad. AeroMobile itself is the first operator to provide such services in the world and the services were commercialized for flying on Emirates Airlines as of March 2008.

AeroMobile Limited is a company based in England with majority shares owned by Telenor ASA, the seventh largest telecommunication company in the world. In response to the market demand since 2003 AeroMobile has been developing safe communication facilities for airplane passengers who carry cell phones and PDAs.

As the market leader in this field AeroMobile started to provide international services in April 2007 when Qantas commercially launched its in-flight mobile technology. The AeroMobile system was successfully tested through over 1,000 Australian domestic flights when SMS, GSM and GPRS data services were being made available for passengers. Qantas made a commitment to apply the services fully for its flights.

Meanwhile, starting March 2008 the AeroMobile system made cell phone calls possible for passengers of Emirates Airlines. Aeromobile and Indosat jointly guarantee the safety of mobile phone communications aboard international flights. Fuad Fahrudin, Group Head Integrated Marketing of Indosat, said that there are at least three factors behind the guarantee.

First, Aeromobile uses current technology that does not interfere with the plane's navigation equipment. Second, the technology used by Aeromobile is certified by the European Aviation Safety Agency. "In addition, we only install the Aeromobile system if the plane also meets our standards," explained Stein Gudbjorgsrud, Director of Regulatory Affairs of Aeromobile.

Third, the Aeromobile system ensures that all cell phones operate using minimal energy to avoid any possible navigational disruption. The Aeromobile system has been used by a number of major airlines, such as Emirates, which has about 1.5 million customers.

The 18,000 flights - equal to 82,000 flying hours - prove the high quality of Aeromobile technology. Currently, it costs US$250,000 to install the Aeromobile system and it is compatible with any type of Airbus and Boeing plane. "The launching of Aeromobile in Indonesia is our commitment to giving our Matrix subscribers maximum benefits, especially for communications while flying," said Johnny Swandi Sjam, president director of Indosat, during the signing of MOU for an International Roaming Agreement between Indosat and AeroMobile on July 21, 2009.

Now based on this agreement Indosat's Matrix subscribers who already have an international roaming facility can enjoy the AeroMobile service on two airlines, Emirates Airlines and Malaysia Airlines. Soon to follow are Saudi Arabian Airlines, Virgin Australia Airlines and Qantas Airways. "We are proud to be able to provide this service so that our subscribers can stay connected while flying. This is the communication solution that meets the growing demand of customers," added Stein Gudbjorgsrud, Director of Regulatory Affairs of AeroMobile.

During international flights the Matrix subscribers can communicate safely, because, as mentioned earlier, the AeroMobile technology has been approved by the European Aviation Safety Agency as well as by the civil aviation authorities of the airlines countries. The AeroMobile system is designed in such a way so that it does not disrupt the aircraft navigation system. In addition the system controls the cell phones so that they operate on minimum power.

Besides cell phone calls and SMS, AeroMobile also makes possible data communication through GPRS for BlackBerry and push email. AeroMobile has developed a unique technology for the GPRS data for BlackBerry and emails by using the Inmarsat satellite. To enjoy this facility Matrix subscribers do not have to apply for the service. They can use it just by switching on their cell phones. There is no additional subscription fee, just the normal international roaming rate. (Burhanuddin Abe )