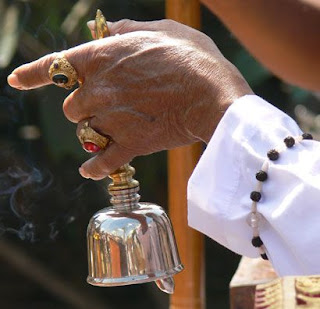 The vast majority, 92% of the Balinese follow a Shivaite sect of Hinduism from South Asia that mixes pre-Hindu mythologies and Animism, with Buddhism from Southeast Asia. Among the Balinese,minority religions include Islam (5.7%, Christianity (1,4%), and Buddhism (0.6%). These official statistical figures do not include immigrants from other parts of Indonesia.

Muslims and Christians from Java, Lombok and other islands of Indonesia, Indonesian and Malaysian Chinese, as well as an expatriate population from Australia, Europe and America, among others have also settled on Bali. Finally, a small community of Balinese who trace their roots to before the third wave of immigration, and are known as the Bali Aga, mostly do not follow the Balinese Shivaite Hinduism, but their own animist traditions. However, because the Indonesian government recognizes Hinduism as one of the country's five officially sanctioned, monotheistic religions, followers of various tribal and animistic religions have identified themselves as Hindu in order to avoid harassment or pressure to convert to Islam or Christianity.

Ritual purity is one of Hinduism's primary ethical concerns. Another distinguishing feature, which traditionally helps maintain ritual purity, is the division of society into the traditional occupational groups, or varna (literally, color) of Hinduism:Brahmins (priests, Brahmana in Indonesian), Kshatriya (ruler-warriors, Satriya in Indonesian), Vaishya (merchants-farmers, Waisya in Indonesian), andShudra (commoners-servants, Sudra in Indonesian). As with Islam and Buddhism, Balinese society greatly modified Hinduism to the needs and realities of their culture, for example never rigidly applying the caste system though it was present in form.

Even today, Balinese Hinduism remains deeply interwoven with art and ritual, though it is distinctly less closely preoccupied with scripture, law, and belief than Islam in Indonesia. Balinese Hinduism lacks the traditional Hindu emphasis on cycles of rebirth and reincarnation, but instead concentrates on a myriad of local and ancestral spirits.

Balinese believe these spirits have the capability to cause harm. Thus they place great emphasis on dramatically and aesthetically satisfying these spirits through ritual acts performed at temples scattered throughout villages and in the countryside. Every Balinese belongs to a temple by virtue of descent, residence, or some mystical revelation of affiliation. Some temples are associated with the family house compound; others are associated with rice fields, and still others with key geographic sites.

A notable feature of religious expression among the Balinese people, ritualized states of self-control lies behind their reputation for graceful and decorous behavior. Rituals of the life cycle are also important occasions for religious expression and artistic display. Ceremonies at puberty, marriage, and, most notably, cremation at death provide opportunities for Balinese to communicate their ideas about community, status, and the afterlife.

Balinese religion is hierarchically organized, with one small segment of the aristocracy known as the Brahmin, or priestly, class occupying the most prestigious spot at the top of the hierarchy. Not affiliated with any temple, a Brahmin priest acts as a spiritual leader and adviser to individual families in various villages scattered over the island.