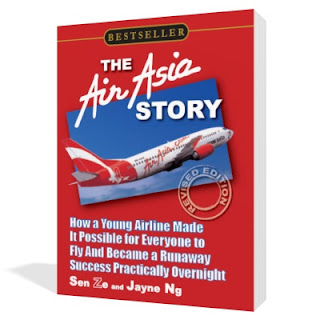 IF Tony Fernandes, the former deputy president director of Time Warner Music Southeast Asia had not gone into the budget airline or low cost carrier (LCC) business not many people would have heard of him.

Tony is aware that traveling is a major industry or business. He is also aware that many people will frequently fly. "And Asia is a huge ‘playground', because it is a large continent, which means a promising market," he says as quoted in the book The AirAsia Story written by Sen Ze and Jayne Ng.

AirAsia has been recognized as the most promising budget airline in Southeast Asia. By December 2002 in just seven months, the airline racked up a massive revenue of Rp 282.5 billion with a profit of Rp 48.5 billion. In the span of seven months AirAsia was able to carry about 1.1 million passengers.

The airline applies efficiency in all sectors so costs are kept to a minimum, there are, for example, no meals for passengers for flights of a short duration (maximum 3.5 hours) and no accommodation for the crew, low cost airports, paperless tickets and so forth.

AirAsia purchases its fuel by paying in advance to avoid future price increases. It covers the most promising routes and keeps on expanding so that by 2011 at least 60 aircrafts will be in operation. As a pioneering low cost carrier in Asia the airline, which is headquartered in Malaysia, keeps innovating in its promotions and operations. AirAsia is also currently concentrating on adding routes to cover international destinations including Australia, Europe, the Middle East and soon the United States. It is also adding new airplanes, the Airbus A320, which are being sent to Malaysia, Thailand and Indonesia in stages.

In Indonesia AirAsia has 14 aircraft, comprising of eight Airbus A320 and six Boeing 737-300 for 14 routes, both domestic and international. After its latest Bali - Perth route, another new route, Jakarta - Ho Chi Minh (Saigon), is being opened with four flights a week on Mondays, Wednesdays, Fridays and Sundays. Ticket sales started on August 20 for flights from Sept. 18, 2009 until July 21, 2010.

AirAsia is actually not the first airline with a low cost carrier (LCC) concept as in Europe there are EasyJet, RyanAir and German Wings. And before these airlines there was Southwest, the pioneer of budget airlines.

In today's global economic downturn low cost carriers have indeed become the preferred option of many passengers. Many airline companies have turned to this business albeit only for short distance flights. "A budget airline is actually saved by domestic flights that take not longer than four hours," said General Manager and CEO of the International Air Transport Association (IATA), Giovanni Bizignani, in Kuala Lumpur, Malaysia, in the middle of this year.

The ongoing global economic crisis has had a negative impact on the airline business, while at the same time global oil prices show a continuous upward trend. Therefore, airline companies have to revise their loss figures for 2009 as profits are going down by about 15 percent. The number of passengers in 2009 is also predicted to be smaller, only 2.06 billion people, compared to the 2008 figure of 2.24 billion passengers.

To avoid being crushed by the crisis an airline company has to apply the following strategy: save fuel costs, ensure efficiency in all sectors, boost manpower productivity, strengthen reserve funds, arrange appropriate capacity on schedule and cooperate with other airline companies.

Indonesia has potential as the archipelago has many islands and a population of over 220 million, says president director of Garuda Indonesia, Emirsyah Satar. Currently Garuda has a major market in Southeast Asia. Passenger safety and comfort are very important, he adds, while the price of tickets can be reduced through Internet sales, which is one of the strategies applied by LCC.

A number of industry experts predict that LCC revenue will go up this year as passengers are switching from full service airlines, many of which are undergoing mergers due to decreased profits. (Burhanuddin Abe)