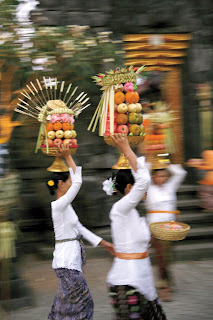 THE most famous of Indonesia’s 17,000 plus islands, Bali lies between Java to the West and Lombok to the East at the coordinates of 8°25′23″S, 115°14′55″E. It is one of the country's 33 provinces with the provincial capital at Denpasa towards the South of the island. Predominantly Hindu anrd the country’s most popular tourist destination, Bali is rightly renowned for its arts, including dance, sculpture, painting, leather, metalworking and music.

Tropical describes Bali’s equatorial climate in just one word. In the lowlands, temperatures average between 21 to 33 degree Celcius. In the mountains, temperatures may dip as low as 5 degree Celcius. Humidity in Bali varies but is always present, between 60 % to 100 %. In general, Indonesia experiences two yearly seasons of monsoon winds: the southeast monsoon, bringing dry days from from May to October, and the northwest monsoon, bringing rain normally between November to April with a peak around January/February when it may rain for several hours each day. Rain on Bali follows a fairly predictable pattern. Before it rains, the air gets very sticky; afterwards it is refreshingly cool and the sun usually appears. The changing seasons can bring high waves which attracts legions of surfers to the isle. The dry season, May to October, is a better time to visit Bali, and especially June to August. This is the time to climb mountains or visit nature reserves; when wild bulls go in search of water and sea turtles lay eggs.

Bali lies 3.2 km East of Java and approximately 8 degrees South of the equator. East to West, the island is approximately 153 km wide and 112 km North to South (95 by 69 miles, respectively), with a surface area of 5,633 km2. The highest point is Mount Agung at 3,142 m (10,308 feet) high, an active volcano that last erupted in March 1963. Mountains cover the center to the Eastern side, with Mount Agung the Easternmost peak. Mount Batur (1,717 m) is also still active. About 30,000 years ago it experienced a catastrophic eruption — one of the largest known volcanic events onEarth. The principal cities are the Northern port of Singaraja, the former colonial capital of Bali, and the present provincial capital and largest city, Denpasar, near the Southern coast. The town of Ubud (North of Denpasar), with its art market, museums and galleries, serves as the cultural center of Bali.

There are major coastal roads and roads that cross the island mainly North-South. Due to the mountainous terrain in the island's center, the roads tend to follow the crests of the ridges across the mountains. There are no railway lines.