Luxury cars overtaking one another 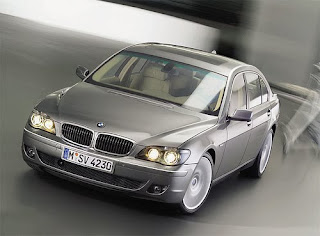 THE market for luxury cars in Indonesia seems to be unaffected by the ongoing global recession and fluctuating oil prices. While the medium and smaller cars are busy reinventing themselves and innovating to prepare for energy saving technology in facing increasing fuel prices, fuel hungry premium cars with 3,000 cc engines are being marketed as usual as if there is no fuel problem.

Luxury cars are being launched one after the other as if the economic situation is normal. Take for example, the BMW 730Li, which was launched this month to complement the 750Li and 740Li which were released early this year.

In Indonesia, the BMW 7 series is the market leader in the premium segment with price tags of over Rp 2 billion. This year, 37 of them had been sold by the end of September, double the number of sales last year in the series. "As the BMW flagship, the latest 7 series has not only received a number of international car awards, but it is also the choice of public figures, government officials as well as diplomats. Corporation heads have also chosen this high performance car to match their status and prestige," said Ramesh Divyanathan, President Director of BMW Indonesia.

The various superior features of the BMW 7 series are its elegant appearance that is combined with high technology, extreme comfort and excellent safety features. BMW customers realize that when they purchase a BMW 7 series car they have opted for an environmentally friendly car due to its BMW Efficient Dynamics technology. BMW has also been named the most sustainable car manufacturer for the last five years by Dow Jones Sustainability Index.

The new BMW 730Li is equipped with a six cylinder engine that can produce 258 hp at 6,600 rpm with a maximum torsion 310 Newton-meter at 2,600 rpm. This car can reach a speed of 100 kilometers per hour in just 7.8 seconds and reach the highest speed of 245 kilometers per hour. It consumes only 9.8 liters of fuel for every 100 kilometers, while its CO2 emission is only 229 grams per kilometer.

Among its extreme comfort features are electrically adjustable seats, electric sunblind roller for rear and side windows, as well as an automatic air conditioner with four-zone control. The rear passengers can also enjoy their own entertainment system via an eight inch monitor, which can be adjusted for positioning, plus DVD that can be operated through a remote control.

BMW is not the only car maker to record high sales figures this year. While most other car brands are fighting for sales, luxury cars seem to be overtaking one another. Over the past three months there has been a 66 percent increase in sales or 1,119 luxury cars, while during the same period last year only 676 units were sold.

According to sales data released by PT Mercedes-Benz Indonesia (MBI), in the first nine months of this year its total sales reached 2,931 vehicles, an increase of 0.3 percent on the 2,922 units sold over the same period. "Based on our analysis, there will be an increase of 12 percent in premium car sales from last year's figure, while for Mercedes it will be an increase of 15 percent this year," said MBI president director Rudi Borgenheimer in Jakarta.

Similarly, Volvo cars or Volvo Personvagnar has also achieved higher sales. Although the segment of the Swedish car is not as large as Mercedes and BMW, it still attracts luxury car consumers in Indonesia as Volvo cars are renowned for their comfort, stability, safety and durability.

Next to European luxury cars, the Lexus could be called Asia's high achiever in this segment. Initially this Japanese vehicle, produced by Toyota Motor Corporation, was more of a compact car with a sporty character. The IS type was introduced as the initial model slightly below Lexus ES and has to compete with the BMW 3 series, Mercedes-Benz class C and Infiniti G35.

In Japan, the first generation of Lexus IS was called Toyota Altezza, with the four-door sedan being launched at the end of 1998. The five-door sedan-station wagon crossbreed, called Altezza Gita, was released later. The RS200 Altezza has a four-cylinder 3S-GE engine, while the AS200 has a six-cylinder 1G-FE engine. Both have a 2,000 cc engine. The AS300 type has a 3,000 cc engine. For export purposes, Toyota markets the cars using the brand Lexus for the IS200 model with a 2,000 cc engine and IS300 with a 2JZ-GE 3000 cc engine. Its sedan-station wagon is called the SportCross.

The name Altezza is no longer used as Lexus is the official market name for the car in Japan. The car's latest model is far more luxurious than the previous generation. Lexus IS with the L-Finesse concept is available in various engine capacities and is marketed under the following names: IS250, IS220d, IS300 and IS350. All models are rear wheel types, while for IS250 an all-wheel drive is also available. Meanwhile Lexus IS-F is a high performing type with a V8 5.0 liter engine and is equipped with Brembo brakes as well as vehicle stability control.

What is clear from the current market situation in this segment is that the luxury cars seem to be surging ahead in sales figures. The car market started to improve in the second semester this year as the political situation became more conducive, interest rates dropped, the rupiah exchange value strengthened, exports were on the increase and economic growth was above 4 percent.

Rudi Borgenheimer of MBI estimates that by the end of 2009 the total sales of luxury cars will reach 4,050 units, which is an increase from the 2008 figure of only 2,931 units. Meanwhile, MBI as the market leader in this segment, has set a sales target of between 2,800 and 3,000 units for this year with a market share of 60 percent.

Sales data at MBI indicates that its retail sales have reached 2,022 units or up by 3 percent as of September 2009 as compared to the same period last year with only 1,972 units. Mercedes still leads the premium car market, with a 69 percent market share followed by BMW (21.1 percent), Lexus (6.1 percent), Audi (2.1 percent), Jaguar (1 percent) and Volvo (0.8 percent). (Burhanuddin Abe)