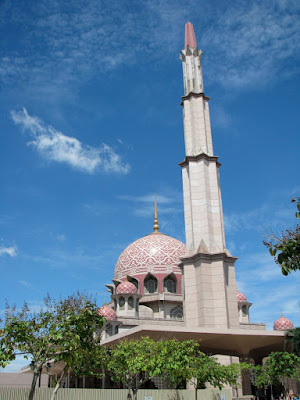 MAJOR cities in developing countries often fall into definite stereotypes. From Mumbai to Manila, Sao Paulo to Jakarta, all reveal unbalanced results of development. This phenomenon, also fueled by rapid and haphazard urban spread, has given such cities the contrasting scenery for which they are known. It’s almost typical that the fruits of development -- skyscrapers, wider streets with green strips and strict regulations — are always accompanied by slums and unofficial garbage dumps.

Imagine if a big change was possible. Playing God, imagine the possibility of rearranging these cities. In rare opportunities, some countries have been lucky enough to build a new city from scratch, just like Malaysia did with Putrajaya.

The brainchild of former Prime Minister Tun Dr. Mahathir Mohamad, Putrajaya was created in 1995. All of its major landmarks have since been completed. It has served as the country’s federal administrative center since 1999, becoming a federal territory in 2001.

The city can be seen on the way to Kuala Lumpur from Kuala Lumpur International Airport, taking up approximately 49 square kilometers of land (4,931 hectares) on what was once Prang Besar in Selangor state.

Delving into the city 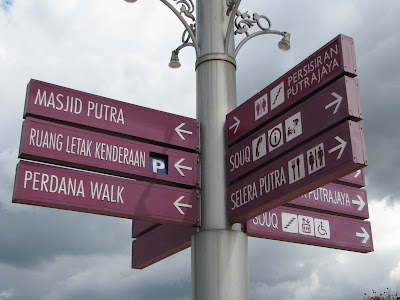 One can get to Putrajaya by taking the KLIA Transit from Kuala Lumpur Central to Cyberjaya/Putrajaya station. Buses to KL are also available at Taman Warisan Pertanian, departing to Old Klang Bus Station and Serdang Komuter Station.

A tour of Putrajaya usually starts at the front of the majestic Perdana Putra, an imposing office complex housing the prime minister’s office designed by a team led by Ahmad Rozi Abd Wahab. Next is the similarly huge Putra Mosque, which is modeled after Iranian architecture, followed by Kedai Mamak (Northern Indian eateries) on the lower structure by the lake. An integrated shopping complex can also be found on the same level, giving eager shoppers the opportunity to browse through everything from jewelry to key chains.

Both Putra Mosque and Perdana Putra face the Dataran Putra city square, which is 300 meters in diameter and has an imposing fountain at its center. Perdana Putra is not open to the public, but get your camera ready and feel free to take pictures.

The idea behind the placing of the building is unique. It is said that Mahathir Mohamad wanted Perdana Putra to be in the center of all the federal buildings. If you face the same direction as the building, you will see the main street, Putrajaya Boulevard, running from the circle of Dataran Putra to Taman Puncak Selatan, which has Putrajaya International Convention Centre (PICC) -- the main convention center in Putrajaya — on its peak.

The 4.2-kilometer-long and 100-meter-wide Putrajaya Boulevard serves as the backbone of the city, with the main commercial and civic areas situated on either side of it. Examples of major federal buildings along the boulevard are the Perbadanan government complex, the Palace of Justice and the Ministry of Finance building.

Aimed at designating a large proportion of the area as green open space, the city planning department decided to build a 650-hectare lake within the land to provide better cooling effects for the city.

Cruising the lake
The lake, on which Putra Mosque seems to float, provides recreational boating activities arranged by Cruise Tasik Putrajaya. Two types of cruises with different prices available are the four- and six-seat gondola-like vessels at RM20 and the large passenger cruise boat at RM30. Both take 20 to 25 minutes to circle the lake following the Jeti Putra-Taman Botani-Jeti Putra route. While the gondola, designed to resemble traditional Malay perahu, has a more romantic feel to it, the larger boat is air conditioned with seats to accommodate more than 70 passengers. On weekends, dinner cruises depart from Jeti Putra at 8 p.m. and cost RM120/head (reserve one day in advance).

Amazing bridges
When it rains, the city streets glisten and reflect the rays of the streetlights. At night, the city glimmers and bridges radiate breathtaking sights. It’s unquestionably a perfect city in the making.Last but not least, Putrajaya has eight amazing bridges and a currently non-operating monorail suspension bridge over the lake. These bridges are the 435-meter-span Putra Bridge, the main bridge in Putrajaya, Seri Bakti Bridge, Seri Bestari Bridge, Seri Gemilang Bridge leading to the PICC, the 370-meter-long Seri Perdana Bridge, the high-tech cable-stayed arch Seri Saujana Bridge, Seri Setia Bridge and the sail ship influenced Seri Wawasan Bridge.

Some of the bridges are inspired by famous bridges in Iran, with Putra Bridge and Seri Gemilang Bridge as examples, while the others were built using the latest architectural designs and technology.