The responsibility of packaged water industry 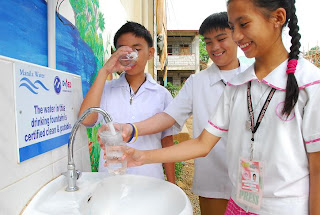 ARE you aware that the packaged water that you drink causes water sources such as springs and wells to dry up? And that it also damages the environment?

The people of Cidahu and Cicurug villages in Sukabumi regency, West Java, have long complained that the level of water in their areas has decreased, causing paddy fields and wells to dry up. All this is due to excessive exploitation by packaged water companies.

Arif Miharja, a community supervisor from the Institute of Study for Development and Technology (ELSPPAT), said that between 2007 and 2008, one water company acquired Rp 3 billion per month from its packaged water business that sourced 1.5 billion liters of water per month and sold it in plastic cups and bottles.

Under regental regulation No. 22/2006, 10 percent of the water that a company sources from an area should go to the residents of the area. However, that is not the reality, Arif said, according to www.asiacalling.org.

Clean water is an irreplaceable vital requirement. That is the main message of World Water Day on March 22. Unfortunately, today with global warming and barren forests it is difficult to get clean water. Hence, the available alternative is packaged water although the impact on the environment is quite damaging.

The consumption of packaged water, especially in bottles, has increased by about 75 percent in the past decade or so with a total of at least 200 billion liters. Clearly this kind of consumption has impacts on the environment as well as the economic and social aspects of human lives. The increased consumption is also not efficient energy wise.

According to Peter Gleick and Heather Cooley, researchers at Pacific Institute, Oakland, California, in 2007 the consumption of bottled water in the United States reached 33 billion liters, or 110 liters per person, which means consumption absorbed energy equal to 32 to 54 million barrels of oil. So while packaged water companies help fulfill the need for clean water, on the other hand the energy required is too great.

For example, one-third of energy in the US is used to produce packaged water. On top of the irresponsible exploitation of water sources, such as springs, the environmental damage caused is quite serious. That is why a new set of rules is needed for a balanced result.

Indeed, a number of companies are becoming more aware of their social and environmental responsibilities. PT Danone Aqua, for example, through its Aqua Lestari campaign has launched a program called “Go Organic 2010”.

The company will facilitate a community development program toward a socio-economic business village in Karanglo, Polonharjo district, Klaten regency, Central Java, as announced on Feb. 17.

The program involves the Village Association of Farmers (Gapoktan) of Karanglo village and is an innovative social approach that encourages all parties to preserve the environment, especially water sources, as well as empowers the community.

WASH, which focuses on access to clean water and hygiene, is part of the company’s corporate social responsibility (CSR) program within Aqua Lestari launched by Danone Aqua in 2006. Aqua Lestari is an innovative social and environmental approach of various parties to preserve the environment, especially water sources, and to empower the concerned communities.

Other programs of the company related to environmental preservation include protecting water sources through reforestation, such as the planting of hundreds of thousands of trees on Mount Merapi and in Mount Salak National Park, agro organic forests as well as providing seedlings, assistance in integrated farming, irrigation, providing education and training to farmers and communities and other activities such as the prevention of floods, free medical aid and free circumcisions. All these programs are designed to cater to the communities’ needs and are based on the company’s guide of ISO 26000 on the company’s social responsibility.

One should give the thumbs up for such activities and hope that other companies follow suite, because protecting water resources is the responsibility of all. The scarcity of clean water is a huge challenge not only to be handled by packaged water companies, but by each and every one of us. (Burhanuddin Abe)