The unique blending of notebook and mobile phone 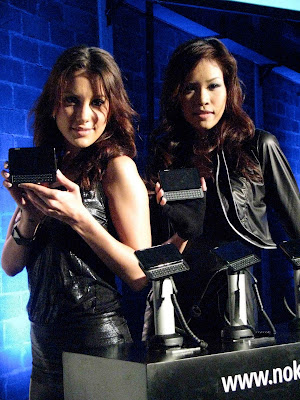 THE notebook has enjoyed rapid growth in recent years, and early this year its worldwide sales exceeded that of PCs. Previously, notebooks were predominantly used in business circles as they were unaffordable for the middle income segment. However, along with its technological development, and as numerous manufacturers started producing notebooks, it has gradually become more affordable. Currently, some notebooks carry a price tag of only Rp 4 million.

Today it is not easy to choose a notebook as a wide range of brands and series are available on the market. However, lower-end notebooks also incorporate various useful features. What is certain is that notebooks have become an essential gadget for quite a number of people. Most interesting is the fact that wireless and 3G technology is also available for connection to the Internet.

In a report by the Gartner Group, analysts stated that in the near future content will be accessible anywhere, anytime and with almost any gadget, including PC and mobile phone. While some years back a mobile phone was unsightly and bulky, today it is small and sleek. Its technology has also developed rapidly. So, be prepared for the arrival of the smartbook after the notebook and netbook.

Perhaps in the not too distant future it will be hard to distinguish between a notebook and a mobile phone. Mobile phone manufacturers are enhancing their products to become mini computers, while computer-makers have entered mobile phone territory.

Apple, for example, did not stop its efforts after launching MacBook, but came up with the phenomenal iPhone. Acer, which used to produce only computers, has revolutionized the market with its Android system mobile phone. This smart mobile phone from Acer is called Liquid. At Acer's annual conference in London recently Liquid was mentioned as the first Android 1.6 mobile phone on the market.

Meanwhile, German CPU mobile phone specialist Qualcomm SnapDragon claims on its website that it will manufacture a smartbook with the fastest processor like Google Android or Acer Base Liquid Android F1 Smartphone 765 Mhz.

According to Qualcomm, the smartbook will be no thicker than 2 centimeters and weigh less than 1 kilogram. It will have a long lasting battery and can be operated for between eight and 10 hours, and one week in standby mode.

Sony Ericsson is also coming up with its own version of the smartbook, called Sony Vaio P or Xperia.

The leading mobile phone maker, Nokia, also has an ambitious plan to launch in the near future the Nokia N900, which is a mini computer and the first smartphone in the world to use Linux Maemo 5. This was stated by Chris Carr, vice president of sales for Southeast Asia Pacific during Nokia Showcase 2010.

He said the target market was Southeast Asia-Pacific countries, meaning ASEAN member nations plus Australia, New Zealand and Bangladesh after the launch in Europe and several major countries. "Nokia N900 will be available in these countries starting March 2010," said Carr at Warehouse Thai River Marina Bangkok, Thailand, on Feb. 22.

N900 has a 3.5 inch touch screen with a QWERTY keyboard, ARM Cortex A8 600 MHz processor, Linux Maemo 5 operation system and a 32 GB internal memory. It has a multitasking capability to open many applications simultaneously. It has a 5 megapixel camera, GPS, HSPA connection and WiFi 802.11 b/g. The Nokia N900 is also the first mobile phone in the world to be equipped with the Firefox Internet browser by Mozilla.

Carr said that the open platform Maemo of N900 gives opportunities to application makers to cooperate with Nokia. He also said that Nokia is committed to entering into such agreements with various developers anywhere in the world, including local manufacturers. Currently, hundreds of applications have been made for the N900 and the number is increasing. The applications are available online at Nokia OVI Store as well as the Maemo developer community.

The latest Nokia Ovi Maps are also featured and cover 74 countries and 46 languages. More than one map is downloaded every second of every day, totaling about 100,000 downloads daily. Ovi Music has similarly impressive statistics. On average, a Comes With Music user downloads 500 songs for free in the first week, which would cost them US$600 with iTunes. The Ovi Music catalogue contains more than 9 million songs.

Since its launch in May 2009, Ovi Store has become the store for wireless makers in the Asia Pacific area. Southeast Asia has become the largest contributor with its 30 percent Ovi Mail users. In the meantime, eight operators in Australia, Indonesia, the Philippines, Singapore and Thailand use Nokia Messaging, push mail and IM services. (Burhanuddin Abe)