Combining the strength of product and marketing 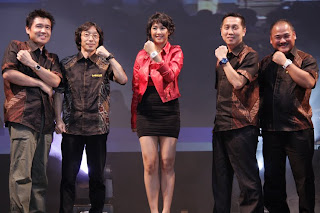 MOST of the world’s young generation is undoubtedly familiar with G-Shock. These watches made by Casio Japan have become a trendsetter that not only tell the time but ultimately combine extreme sport, street culture, fashion, music and art.

Fifty-eight-year-old Kikuo Ibe is the creator of G-Shock digital watches. “In 1983, I created the thick G-Shock and the most important thing was that it was shock resistant. It did not cross my mind then that the product would be a part of today’s youth fashion,” he said.

Many years ago his parents gave him his first watch upon his graduation from high school. One day he dropped and broke it. Ever since then he wanted to create a rugged and shock resistant watch that had sophisticated technology and a casing that made it safe as well as stylish.

Ibe was so obsessed with the idea that he decided to drop a watch to street level from his third-floor apartment. “I did this numerous times until I was exhausted,” he recalled with a laugh. The result of the experiment is the sturdy Gravity Shock wristwatch, or G-Shock, with latest models launched frequently.

At the forefront of modern design and due to the proven results from Casio’s research and development (R&D) department, which is headed by chief engineer Kikuo Ibe, today G-Shock watches have transformed from the previously sport watches into fashion accessories that are must have items for those with a dynamic and adventurous lifestyle.

Ibe is amazed at the extent of the impact of his watches. “This is truly a collaboration of our colleagues in the media and distributors worldwide that has made G-Shock what it is today. I often say to myself, ‘Oh, shock!’,” he said while slapping his forehead.

He also did not imagine that the popularity of G-Shock would spread from Japan to the entire world. To celebrate the success of this legendary watch, Ibe’s company, which is a Fortune 100 company, is holding an event called Shock The World Tour that to date has visited 28 cities in 18 countries, including Paris, Barcelona, Berlin, Mexico City, New York, Shanghai, Hong Kong, Sydney, Bangkok, Madrid, Milano and Tokyo since kicking off in London on June 11, 2009.

In each of these lively cities the festive Shock The World Tour has presented the latest collection of G-Shock, noted musicians and DJs producing tunes that made everyone rush onto the dance floor. Shock The World Tour 2010 by Casio G-Shock also came to Jakarta on Oct. 6, 2010 at Golden Crown and was attended by Kikuo Ibe, who introduced a variant for female teenagers, Baby G & Sheen Ambassador, represented by the popular singer Sherina.

According to Ibe, Indonesia is an important market for the product due to its thriving economy. “The trend here is also favorable. That’s why I felt it was necessary for me to come here and communicate about the superior features of G-Shock even though the product has been available in Indonesia since 1988,” explained Ibe, who has visited Indonesia twice.

Ibe and the R&D team that are fully supported by the company never feel complacent about their creations. So they frequently and regularly come up with the latest types that contain the latest technology, such as watches that can measure the temperature and so forth while some of them run on solar power.

However, in a modest tone, Ibe said that product development is not the only factor behind the product’s success, because it has to be combined with strategic marketing. “The worldwide popularity of G-Shock is not only due to its uniqueness but also to its marketing strength,” explained Ibe, who has a team of 20 staff working under him in the R&D department.

Ibe realizes that he is getting older. He started working for Casio in 1976, so it has been 34 years and this year he turned 58 while G-Shock was created 27 years ago. “The creative spirit is very much alive in our R&D department. I cannot guess the future development and where it will all head to in the coming years. In today’s Internet era, with lots of smart and sophisticated gadgets, it is very likely that it will be the right direction to take,” said Ibe, who does not own a mobile phone.

Besides not having a mobile phone even though every day he is absorbed in the digital world, Ibe, who loves sports and jogging, does not like to play computerized games. “While I am very much interested in technology, I don’t want to be tied up with gadgets,” he said.

What he hates most is locking himself up alone in a room. “I have given all my thoughts and spent all my time in the office, so I don’t like to be too attached to technology. After finishing my work at the office I simply appreciate it when I can give my mind a well earned rest,” said Ibe, who loves traveling to foreign countries, which he does at least six times a year.

After the creation of G-Shock, which has transformed the world’s watches, Ibe feels that there have been no significant changes within himself. “The plus point is that I get the opportunity to meet lots of people from all parts of the world and the way I am treated by them is really impressive,” said the father of a 25-year-old son.

He has an obsession that is yet to be realized: making G-Shock for all age levels, since the first generation that started to wear G-Shock many years ago is now becoming older. “Sometimes I imagine it would be ideal if I could make watches for every age group and meet their requirements. So when one gets older one can easily choose the style that suits him or her,” said Ibe who has just two watches — the first G-Shock he produced, a DW500 vintage watch, and a simpler model that he wears on a daily basis. (Burhanuddin Abe)