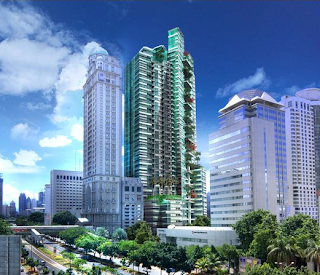 WITH traffic congestion in Jakarta worsening day by day, it is not surprising that many dream of having an office close to their homes or even better having a home and office in one integrated area.
This would be an ideal arrangement for many, resulting in a saving of precious time, energy and fuel. Ideally, the location would be in the heart of the city with complete facilities such as supermarket, children’s playground, swimming pool, fitness center, tennis court and so forth.
It is this kind of comfort that young upwardly mobile people and young couples in major cities like Jakarta now seek. And the solution may well be an apartment that is located in the heart of the city.


Nowadays apartment living seems to be the lifestyle of city residents, especially Jakartans.  The increasing price of land has necessitated the efficient use of available land mostly via development of apartments.
Apartment units are designed by developers in such a way to accommodate every need of its residents but with more efficient and functional space or rooms. This can be clearly seen in the show units made available by developers.
Living in apartments also reflects the sophisticated yet practical lifestyle of the residents.  Practical here means being close to the center of the city, being able to come home almost at any time and not requiring a lot of time for housework and so forth. What makes living here more comfortable is the complete facilities available and many now have spacious green areas.
As in many major cities in the world apartment living has become more than a trend, rather it is a lifestyle and indeed a necessity especially in cities like Jakarta and other major cities in Indonesia. This is clearly indicated by the increase in the sales of condominiums for both the upper and middle segments.
Based on research data compiled by property consultant Procon the supply of condominiums in Jakarta at the end of 2010 was 76,600 units and there was an additional new supply in the same year of 4,800 units and the sales went up to 96.5 percent.  However, the sale percentage of those currently under construction has gone down to 68.5 percent.
The supply is estimated to grow at an approximate rate of seven percent per year for the period 2011- 2012. Obviously condominiums with a strategic location and good facilities will enjoy a reasonable increase in rates. And that is the perspective on the development and marketing of new properties. More and more apartment units are being leased in line with the country’s improved political and economic stability, said Utami Prastiana, head of Strategic Advisory of Procon.
In terms of macro economic indicators the country’s economy has become more solid as can be seen from an increase in domestic investment. According to Utami Prastiana the stable economy here had a positive impact on economic growth as much as six percent in 2010 while the rupiah has also strengthened.
Meanwhile undeniably there was inflation mostly caused by the increased price of volatile foods and other food commodities here and globally. Bank Indonesia or the Central Bank has predicted an accelerated economic growth consistent with global economic recovery. The prediction is between 6 and 6.5 percent for 2011 and 6.1 and 6.6 percent for 2012. “Nevertheless we have to be cautious about some uncertainties related to global economic recovery, the rising prices of commodities internationally and the excessive capital inflow that can trigger an unstable rupiah,” she added.
Based on the increased sales of apartments in 2010 compared with the previous year many observers estimate that the growing demand will continue in 2011 while the large volume of supply will create stiff competition especially in leasing rates. More local customers will up the demand especially for condominiums close to work places and campuses.
The positive economic growth in 2011 is also predicted to have a positive impact as well on the increased number of foreign employees coming and staying in the country. Maximum demand will be created by oil, mining, telecommunications, banking and finance companies. There will be more short term leases, such as weekly or even daily with flexible rates.
Procon’s research also reveals that there was an increased supply of apartments in Jakarta in 2010, that is an increase of 5.1 percent totaling 35,600 units contributed by four middle segment condominiums of 1,000 units each. There was also an increase of seven percent in leases compared to 2009 while the occupancy rate also went up to 71.3 percent.
A new supply of apartments of as many as 4,700 units is estimated to be available for the period 2011-2012. Regarding the leasing rate in 2011, Utami estimates it will be mostly quite stable except for those located in the CBD area because the demand and occupancy rate here is quite high.
The apartment market in Indonesia has clearly opened up new opportunities in property investment. However, investors, lessees and tenants alike must carefully examine the characteristics of the unit that they wish to purchase whether as an investment or for their own use.
The Jakarta Post, April 01, 2011
http://www.thejakartapost.com/news/2011/04/01/apartments-a-modern-lifestyle-choice.html
Posted by Burhan Abe di Friday, April 01, 2011