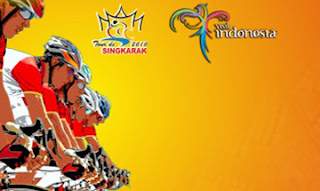 Minister of Culture and Tourism of the Republic of Indonesia Jero Wacik says during his remarks, “Tour de Singkarak 2011 is an attractive synergism of internationally standard bicycle racing event and tourism promotion activities in Indonesia, especially in West Sumatra Province. In addition, this event is done with a means to succeed the Indonesia tourism 2011 with the theme Wonderful Indonesia.” Tour de Singkarak 2011 involves Europsort as the international media partner, Garuda Indonesia as the official airline and a number of national media as the main media partner, as well as Daihatsu as the official team car.

The ceremonial opening of Tour de Singkarak 2011 is directly followed by the Padang Circuit Race Stage I, the competition in which all participants of Tour de Singkarak 2011 from 13 international teams from 17 countries and 11 national teams, will compete in the 61-km Stage I in 5 laps. The Stage I starts from Taman Budaya on Jalan Samudera through Jalan Hayam Wuruk, Jalan Diponegoro, Jalan Damar, Jalan Sudirman, Jalan Veteran and back to Taman Budaya as the finish line.
Posted by Burhan Abe di Monday, June 06, 2011