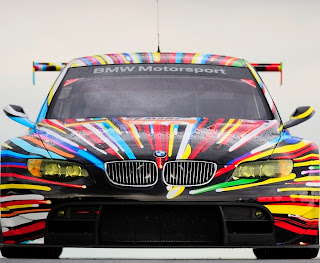 THE 19th Indonesia International Motor Show (IIMS) 2011 taking place from July 22 through 31 offers a great variety of products. Besides affordable vehicles, there are also exclusive cars that cater to particular people.
PT BMW Indonesia, for example, presents an art car created by Jeff Koons. His 17th BMW Art Car was first launched on June 1, 2010 at the Centre Pompidou Paris, one of the most prestigious cultural institutions for modern and contemporary art in the world. The Art Car also took part in the legendary 24-hour car race at Le Mans circuit in France in the same month.
In his creative process, Koons collected pictures of various kinds of racing cars, including the graphic lines, breathtaking colors and everything describing the nuances of speed, and the explosion of the vehicles’ power. As a result, Koons’ creations have bright colors that ooze tremendous power, movement and energy. With the combination of silver interior and powerful exterior, his Art Car has dynamic nuances even though it is standing still. “These race cars are like life, they are powerful and there is a lot of energy,” Koons said in a press release.
While BMW presents its art car, Audi launched the Audi A6. “It was the official car for the East Asia World Economic Forum in Jakarta, June 12-13, 2011,” said Wanny Bhakti, the marketing and PR manager of PT Garuda Mataram Motor, the sole agent for the brand. 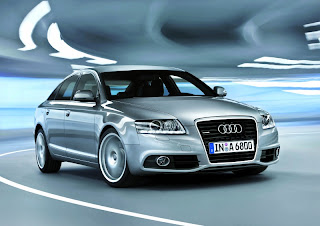 The new Audi A6 is complete with all-wheel drive, dual clutch gearbox S-Tonic for seven or eight levels of acceleration, and several other features. Like the brand’s other models, the car is produced with gasoline or diesel engine. There are several gasoline types, including those with 2,000 cc engine, TFSI with four cylinders and 180 bhp horsepower; 2,800 cc engine, FSI with supercharger and 201 bhp horsepower; and 3,000 cc engine, TFSI with 296 bhp horsepower.
The diesel A6 comes in two types, namely 3,000 cc engine and TDI with either 201 bhp or 242 bhp horsepower, and 2,000 cc and TDI. It is predicted that the latter will be a favorite in Europe. In addition, Audi will also offer a hybrid version that combines conventional engine and electricity with ion lithium battery as the source of power. This one is said to be the development of Audi S and RS6.
PT Mercedes-Benz Indonesia is also making the most of the IIMS 2011 by offering the sporty and trendy Mercedes-Benz SLK R172 Roadster. This is no ordinary car because it has the performance of a sports car. Besides its exotic design, with open roof and two-seat configuration, it comes with compact engine of 1.8 liter capacity and Blue Efficiency technology.
The sole agent targets to sell up to 100 Roadster SLK by the end of the year. The first of its two types is the SLK 200 CGI version costing Rp 949 million (US$111,033), while the SLK 350 CGI carries a price tag of Rp 1.599 billion (off the road). Many people have reportedly placed orders with Mercedes-Benz Indonesia for these cars.
Mercedes-Benz still dominates the luxury car market in Indonesia. According to Rudi Borgenheimer, president director of Mercedes-Benz Indonesia, the sales of luxury cars in the country in 2010 reached 5,327 units, 67.4 percent of which Mercedes-Benz grabbed, selling 3,590 premium class cars. Mercedes-Benz’ achievements in 2010 coincided with its 40th anniversary in Indonesia or 125th anniversary in the world, which fell in January 2011.
The improving economy along with the enthusiast automotive market bodes well for luxury car sales in Indonesia. Even though the segment is not so big, it has prospects because there are not many players selling cars that cost more than Rp 700 million. It is not only European luxury cars that want to dominate the Indonesian market, so too do Japanese cars, especially after the ratification of the Indonesia-Japan Economic Partnership Agreement (IJEPA) in which cars imported from Japan that have an engine capacity of more than 3,000 cc will enjoy a tax holiday.
“There is no problem with Japanese luxury cars with engines of more than 3,000 cc capacity dominating the market in Indonesia because we don’t make such cars,” said the Industry Ministry’s director general for high-tech industries, Budi Darmadi, as quoted by Antara News Agency.
He said that luxury cars made in Indonesia have engines that are less than 3,000 cc. Therefore, it is believed that luxury cars with less than 3,000 cc engines produced in Indonesia can still compete with Japanese luxury cars because there would be a significant difference, particularly in luxury sales tax.  “The tax for luxury cars with above 3,000 cc engines can be as high as 75 percent, while it is far below that for those under 3,000 cc. So there is a significant price difference in play,” he said.
Some non-Japanese luxury car producers worry that they may lose out once the IJEPA has been ratified. According to Budi, in order to strengthen their competitiveness, they should follow Japan’s example and conduct bilateral cooperation with Indonesia. (Burhanuddin Abe)
The Jakarta Post, July 22, 2011
http://www.thejakartapost.com/news/2011/07/22/car-players-compete-attract-buyers.html
Posted by Burhan Abe di Thursday, July 21, 2011