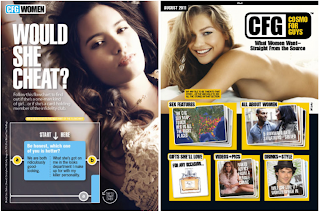 Cosmopolitan, long the resident authority on heterosexual dating and mating for teenage and adult women alike, has launched its first magazine for men, CFG: Cosmo for Guys.
Men won’t find this guide to women by women on newsstands, however. Instead, CFG is launching solely on the iPad, available via the App Store [iTunes link] for $1.99 per issue, $3.99 per month or $19.99 per year.
Cosmo Editor-in-Chief Kate White believes there is a demand for the product. Approximately 7.4% of Cosmo‘s readership is male, according to data from MRI. And more than one-third of visitors to cosmo.com every month are men, White says.
Since White arrived at the magazine in 1998, she says she has received hundreds of letters and emails from men who confessed that they were stealing their girlfriends’ or their wives’ copies when they weren’t around. “They said it was like having the other team’s playbook,” she recalls. “And a fair number of those emails said I ought to do something for guys.”
White says she mocked up a cover for a men’s Cosmo years ago, but couldn’t imagine men actually purchasing it. But when the iPad came along, she realized that it would allow men to read privately, in a way that was more interactive and engaging than what a website could offer.
Furthermore, the iPad has enabled Cosmo to test out, in a cost-efficient manner, what is still an arguably volatile market for magazines. With the exception of one “special projects” hire, White was able to leverage Cosmo‘s existing editorial and design resources to produce the magazine, which is scheduled to publish 12 issues over the next year.
The app itself is strong. In fact, with its moving flowcharts, resizable video and compactly designed features, it’s much more interactive and engaging than the bonus issue Cosmo released for the iPad this spring.
Working in conjunction with Hearst’s digital team, Cosmo‘s design department has departed from the magazine format a little, especially from a navigation standpoint. Instead of a traditionally crowded table of contents, for instance, the app’s home screen features five pairs of section titles and thumbnails to choose between. Users can hold down one of the thumbnails to display all of the stories in that section.
I was particularly impressed with the “Will She Like It?” and “Read Her Mind” features, which pull in live poll data from cosmo.com to help men understand what fashion trends women find appealing, and what movie they are going to want to see this weekend, among other things.
Whether the app itself succeeds, White intends to build out the CFG franchise. This fall, the team is launching both a CFG radio show on SiriusXM (channel 109) and a book bearing the CFG label.
As for the original Cosmo? White says it’s coming to the iPad soon. Meanwhile, it’s enjoying strong sales on Barnes & Noble’s Nook ereader alongside many other women’s magazines on the device. (Lauren Indvik)
http://mashable.com/2011/08/01/cosmo-for-guys-ipad/
Posted by Burhan Abe di Tuesday, August 02, 2011