The Musical Event You Simply Must not Miss! 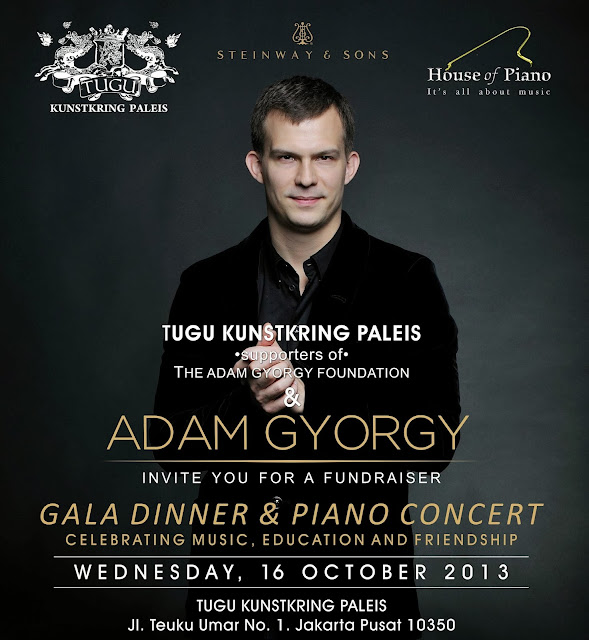 Lovers of piano music will be pleased to hear that Hungarian-born virtuoso pianist Adam Gyorgy will be giving a recital at Tugu Kunstkring Paleis on Wednesday October 16, 2013. The concert is a fundraiser for the Adam Gyorgy Foundation, founded in 2006.

Gyorgy has made many trips to Indonesia over the years. He was amazed at the musical talent he saw in young students when giving masterclasses both here and elsewhere in Asia. Many of the youngsters needed financial support to continue their studies, including travel to Hungary to participate at the Adam Gyorgy Castle Academy, a summer gathering of world-class music teachers and talented students. The Foundation therefore supports musical education around the world and provides piano scholarships for some students to participate at the Academy.

Gyorgy, not yet 32, has wowed audiences both here and around the world with truly spectacular displays of his virtuosity and musicianship. A child prodigy from the age of four, Gyorgy rose swiftly to fame and has been rapturously received by audiences in Asia, North America and Europe. He played before a global audience when he gave a recital at the opening ceremony of the UEFA Euro 2012 soccer event in Warsaw, Poland.

Although associated with music composed by his fellow countryman Franz Liszt, which is both intensely lyrical yet can be fiendishly difficult to play, Gyorgy has a wide repertoire and also improvises delightfully, his style an eclectic but accessible mix of classical, jazz and rock motifs.

Gyorgy has already earned the accolade Steinway Artist, which puts him in the company of world-renowned classical pianists like Alfred Brendel, Vladimir Ashkenazy and Lang Lang, but also jazz artistes like Diana Krall and Harry Connick Jr. In his hands, a Steinway produces a range of sounds and color from the most plaintive pianissimo to the mightiest fortissimo of a full concert orchestra.

His Kunstkring recital will include both popular concert favorites, improvisation and – who knows – maybe even a well-known local melody or two as an encore? Like his improvisations, Gyorgy is self-effacing, informal and very approachable, his smart-casual appearance on the concert platform deliberately distancing him from the stuffy bow-tie and tails of the conventional concert pianist.

Tugu Kunstkring Paleis is the ideal venue for this prestigious event, given its crucial role as an arts and culture center since its original inauguration almost exactly 100 years ago. The evening will commence with a wine accompaniment to a gourmet dinner prepared in Tugu’s highly regarded kitchens.

Adam Gyorgy is giving back to music in return for being blessed with enormous flair and talent. Are you prepared to respond by giving to his foundation?
Posted by Burhan Abe di Tuesday, October 15, 2013