Penfolds is celebrating a collaboration with Europe’s most respected French glassmaker, Saint-Louis to acknowledge the art and culture of a service ritual long associated with the flagship Grange. This collaboration also recognises the first commercial release of only five 2012 Grange Imperial 6 litre bottles available on the planet.

The distinctive hand-made crystal objet d’art service vessel, Penfolds Aevum Imperial Service Ritual, was designed exclusively for the 2012 Grange Imperial.  It precisely balances and elevates the Imperial to facilitate the perfect pour. This statuesque design reflects a powerful and passionate union and painstaking hours of crafting and refining the perfect piece.  It also ratifies Penfolds reputation of innovation and experimentation while respecting customs of the past and the rarity and splendour of every drop of Grange.

“Care, double decanting and ceremony is woven into the fabric of Penfolds and transcends the ordinary. The elevation of the service ritual by way of the Penfolds Aevum Imperial Service Ritual enhances the enjoyment of Grange to release aromas and flavours through aeration, and importantly delivers an unforgettable visual experience and sense of occasion,” says Peter Gago, Penfolds Chief Winemaker.

This is the first time Saint-Louis, who has been making handcrafted crystal objects in France since 1586, has collaborated with a global brand outside of Europe. “When talent, heritage and know how come together, the journey from craft to ritual can be truly extraordinary. The collaboration between Penfolds and Saint-Louis represents a marriage of two masters of their crafts. This is the first time something of this calibre has taken place and the first time that we have collaborated with a winemaker at this level,” says Jérôme de Lavergnolle, Chief Executive Officer of Saint-Louis.

As part of the collaboration, a limited edition release of smaller sculptured decanters Penfolds Aevum Crystal Decanter, accompany the 750ml 2012 Grange and are also available. Each decanter features the striking diamond cut, a signature hallmark of Saint-Louis. Hand-blown, hand crafted.

The Penfolds and Saint-Louis Collaboration

1. Penfolds Aevum Imperial Service Ritual: A distinctive service vessel that facilitates a perfect pour from the 2012 Grange Imperial (6 litre) A distinctive service vessel that holds the 2012 Grange Imperial to facilitate the perfect pour. Only five available globally. The Penfolds Aevum Imperial Service Ritual showcases craftsmanship, expertise and tradition. Rare and refined, this masterpiece is hand-blown for elegant balance, captivating movement and precision. The crystal objet d'art respects the rarity of each drop of Grange. Sale Price: $185,000. This price includes the 2012 Grange Imperial.   Available exclusively from the Magill Estate Cellar Door, South Australia, from the 20th October 2016 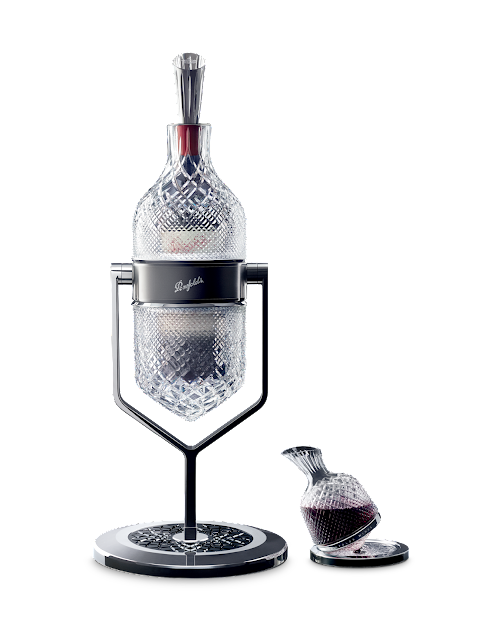 2. Penfolds Aevum Limited Edition Crystal Decanter (750ml). An exquisite and visually enchanting decanter which features the striking diamond cut, a signature hallmark of Saint-Louis crystal. The decanter accompanies the 750ml, 2012 Grange. Hand-blown by Saint-Louis master craftsmen, each decanter is artistically designed to delicately aerate the wine. Only a limited number available. This item is only available together with the purchase of the 2012 Grange 750ml bottle. Recommended Retail Price - $2,100. This price includes the 2012 Grange 750ml. Available exclusively from select retailers, globally from the 20th October 2016.

About Penfolds
Since 1844, Penfolds has played a pivotal role in the evolution of winemaking with a history and heritage that profoundly reflects Australia’s journey from colonial settlement to the modern era. Penfolds collection of benchmark wines were established in a spirit of innovation and the constant and endless pursuit of quality, evidenced from the secret bottling of Grange in 1951 and the unbroken line of vintages of what is now Australia’s most iconic wine.

Now, the collection continues to display the distinctive and consistently recognisable Penfolds ‘House Style’; the ultimate expression of Penfolds time-honoured tradition of sourcing the best fruit from the best regions. Historic blends, significant milestones and heritage vineyards have been honoured by a lineage of custodians whose courage and imagination, precision and humility have ensured Penfolds remains true to its original values while remaining relevant for current and future generations. The stories and philosophies behind each label bring a timeless quality, making Penfolds wines special and compelling for collectors and drinkers the world over.

About Grange
Grange is an Australian icon - a National Trust heritage-listed wine - which captures both a ‘sense of place’ and the essence of Australian agricultural ingenuity and innovation. The story of Grange is steeped in the Australian ethos. It has a history, prestige and lasting quality that interconnects with the great wines of Bordeaux. For many wine collectors and observers it remains a defining wine.  The 2012 Grange is 98% Shiraz, 2% Cabernet Sauvignon from the Barossa Valley and McLaren Vale.

About 2012 Grange Imperial
This is the first time Penfolds has commercially released Grange in this rare bottle format, an imperial. The 2012 Grange Imperial towers over a standard 750ml bottle, enveloping 6 litres. Offering further aging potential, presence, and prestige, the Imperial is a special format for a treasured wine celebrated for its cellaring potential.

About Saint-Louis
Saint-Louis is one of the most prestigious crystal houses in the world. Every day since 1586, Saint-Louis has made crystal creations crafted by master glassblowers and cutters considered to be among the very best in France (“Meilleurs Ouvriers de France”). All possess irreplaceable knowledge and ancestral skills that have been enriched from generation to generation: crystal is mouth-blown, hand-cut, hand-engraved and hand-decorated using 24-carat gold or platinum. Entering the Saint-Louis universe is a demystifying experience – a discovery of unique objects, whose beauty magnifies the everyday moments of pleasure and conviviality. Their shapes, curves and colours are invitations to converse and engage. Saint-Louis nurtures its most iconic creations: the famed diamond cut that gives the majestic Versailles vase its imposing power, the play of intense colours that make Tommy glasses the vessels of celebration on a table, and the pure gold frieze that has richly decorated the Thistle range for a century. Yet, while the crystal manufacture has its imposing looks, no one look is ever imposed. Indeed, it is thanks to its hereditary ability to adapt and constantly innovate that Saint-Louis has skilfully sidestepped any risk of being engulfed by fashion or trends. For existing within one’s time also means escaping the ephemeral.
Posted by Burhan Abe di Monday, October 24, 2016