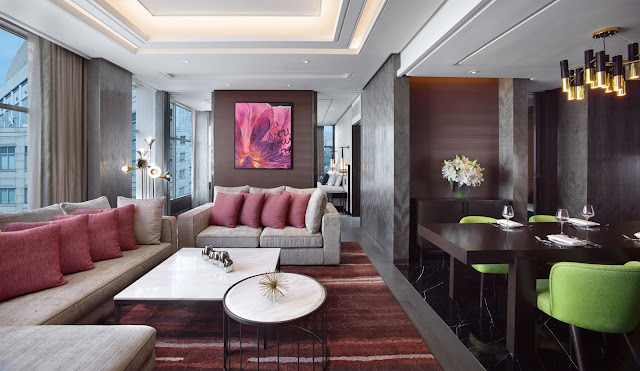 Wilson Associates unveils their revolutionary design in three leading hotels in Malaysia, Singapore and Sri Lanka, to further underscore their position as the leaders in high- end hospitality design in Asia. 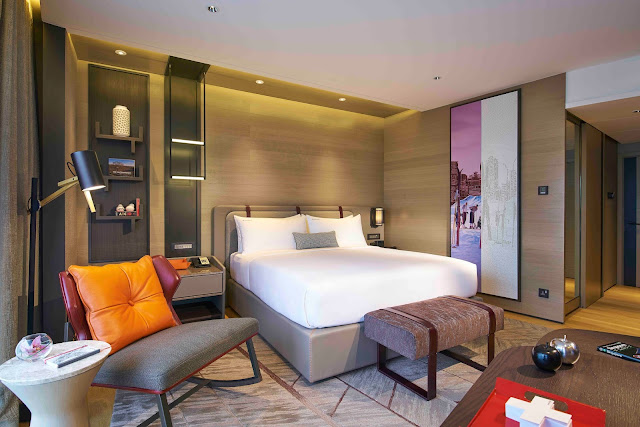 One of Southeast Asia's tallest hotels, Swissôtel The Stamford in Singapore completed the first phase of guestroom renovations in October 2017. The 73-story, 1,261-room Swissôtel draws its design influences from both Singapore and Switzerland. The Swiss attention to detailing was integral to the design of the guest rooms and the interior elements fit together like the mechanics of a Swiss timepiece. The hotel channels the effortless innovation and precision of the Swiss to effect simplicity in an urban setting. Everything in the room has a place and function, allowing guests to unwind in a contemporary, comfortable space.

Local flavour is accentuated through artworks which subtly weave Singaporean and Swiss themes into a continuous narrative. The design incorporates the Swiss Cross, re-invented as orange or red stitching on furniture, as well as in the artworks, the door pulls, the fabric patterns and the bed linens. Timber flooring features solid wood inserts reminiscent of a Swiss lodge and the rug designs are inspired by the timber flooring and veneer wooden wall slats. 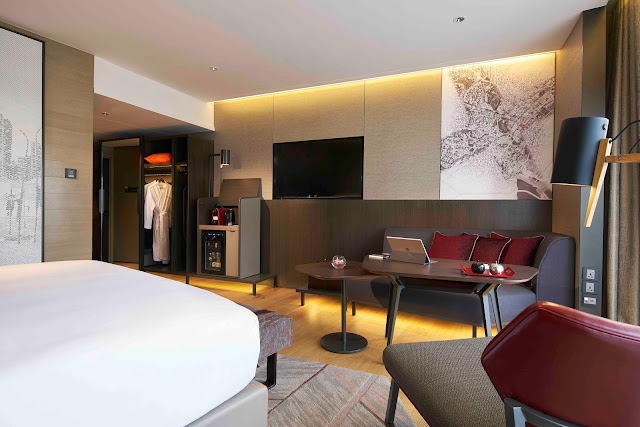 A valet stand at the room entrance, with its many components and functions, is an analogy of the Swiss Watch box where everything has its place; added to the valet stand, an umbrella stand and a shoe platform further strengthen the local connection. The Swiss way of life is further reflected in the room snack basket designed with a picnic basket in mind, an accent chair that is a modern interpretation of the rocking chair, and a bedside table that is a new take on the Swiss life-saving brandy barrel.

In the bathrooms, each vanity counter features a “Vanity Box” packed full of toiletries with space for the guest to arrange their own items neatly – redolent of the Swiss watch boxes where everything has its place. Similarly, the minibar pays special attention to the placement of the condiments, cutlery, glasses and stemware. 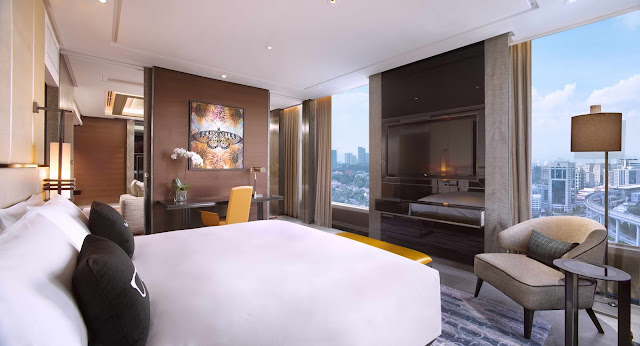 Located in the Malaysian capital of Kuala Lumpur and the first Sofitel to open in Malaysia, this 17- story, 312-room hotel is situated in Damansara Heights. Wilson Associates was awarded the full scope for the 312-room Sofitel Hotel; from the guest rooms to the lobby, all day dining, restaurant, health club, ballroom, meeting rooms and executive lounge.

An existing 2,100 mm elevated platform posed both a challenge and the inspiration behind recreating the urban maze synonymous with Kuala Lumpur, a city whose different cultural enclaves meld together; where a fusion of cultural influences is reflected in the design and curated art pieces. By carving a series of raised platforms that gradually merge into different social zones, the elevated platform was made into an architectural feature to build a sense of anticipation in guests traversing from one space to another. It also subtly delineates the various social zones, creating pockets of space where guests can relax and unwind.

The entire lobby was re-oriented in a diagonal format to create a more dynamic social flow. A 10 meter suspended art installation at the entrance of the lobby is an abstract expression of the constant rain in Kuala Lumpur with the legends of local folklore inscribed into the transparent pieces.

All the artwork is bespoke and sourced locally, as is most of the furniture. The feature art “graffiti” wall facing the lobby features children’s fingerprints from across Damansara, a tribute to the children of Malaysia and showcasing the flora and fauna of the country.

The guestrooms include a walk-in closet and are contemporary in design with French influences evident in the burgundy accents, velvet and bespoke details. The rooms play on the definition of being “French” or how the French value personal appearances: a feature wall consists of a series of carved French vanity mirrors and whimsy is added with bespoke throw pillows in the bedrooms, with sunglasses and eyelashes representing men and women, respectively. Art pieces are integrated into the wall panels with a morphed Malaysian and French context displaying Malaysian flora and fauna with French prose. 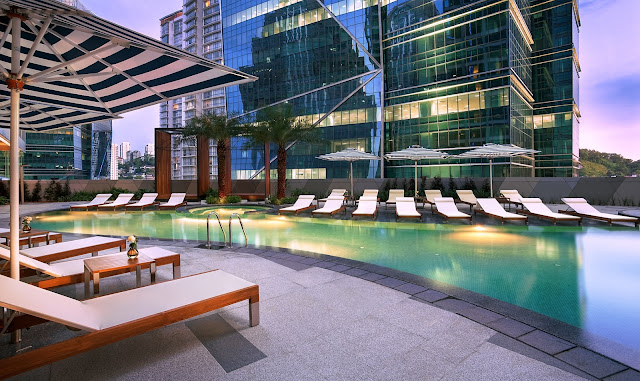 The design of Le Bar centers on the 360-degree artisan coffee and pastry bar which links to the lobby and the all-day dining outlet. Towering metal screens inspired by the Wau Bulan Malaysian kites and evoking the architectural language of the Eiffel Tower create a visual framework to delineate this space with Sofi’s Deli, the hotel’s deli with its towering retail shelving and alfresco seating.

The circular Chinese restaurant, Wan Chun Ting, mimics the Tulou architectural form, creating a focal communal dining theatre, with private dining rooms and other function spaces radiating from the center. The dining theatre creates a central arena for the à-la-carte dining guests, flanked by towering Chinese timber pivot screens, with axial views toward the open duck kitchen, the tea display, and the Chinese accent metal sculptures that adorn the space.

The design of the ballroom is highly distinctive for its fan-shaped architectural volume inspired by the Malaysian Wau Bulan traditional fan; here the carpet and the ceiling seemingly merge with the Ppe-function area creating a visual and architectural connection between the two spaces. 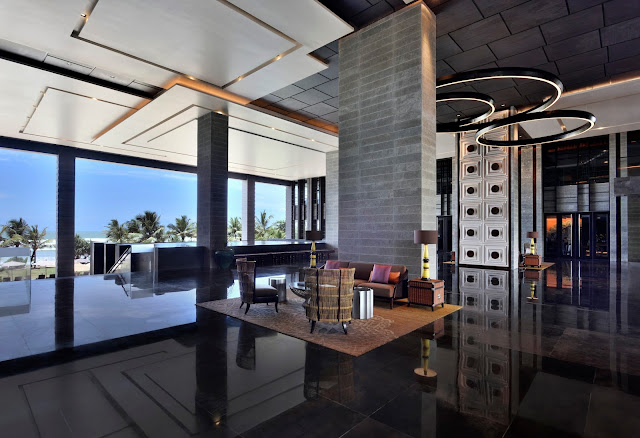 The first luxury hotel in the area and the only building in Weligama Bay, the Marriott Resort & Spa commissioned Wilson Associates to transform it into a contemporary urban resort that will attract both independent international travellers and families. The property breaks away from the rustic and more Mediterranean style typical of most hotels in the area and has a bold, contemporary design in keeping with its imposing edifice. Wilson Associates was responsible for renovating the lobby areas, guestrooms, food and beverage spaces, health club, ballroom and spa.

The overall design inspiration is based on Beeralu Lace, a lace type that is famous in Sri Lanka and used in all kinds of fabric applications. The patterns of the lace are prevalent as a motif throughout the hotel, in the guestrooms and the walls, both to provide a touch of Sri Lanka and to create a warm atmosphere contrasting with the edifice of the hotel. 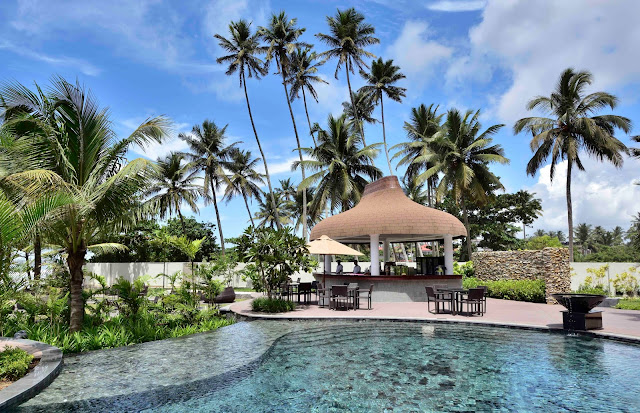 Most of the materials were sourced in Sri Lanka or India. Lace, rattan, timbre and stones were all sourced locally, making up about 80 percent of the materials. The artwork was created by local artists to ensure a Sri Lankan feel and to champion local talent.
Posted by Burhan Abe di Monday, February 19, 2018