Awakening the Spirit of the King Tree at Amanyangyun

Amanyangyun, Aman’s fourth destination in China, a project 16 years in the making, is now complete, and on the 28th April celebrated its Grand Opening.

Located just outside downtown Shanghai, Amanyangyun is a unique forest village of modern and historic Ming and Qing dynasty dwellings, tranquil gardens and an enriching Aman Spa. It is the result of a monumental 16-year conservation initiative which saw 10,000 camphor trees and dozens of Ming and Qing dynasty homes painstakingly transferred 700 kilometres to Shanghai from the Jiangxi Province in eastern China, where the construction of a reservoir threatened their continued existence. Breathing new life into history, Amanyangyun is a celebration of nature, an astonishing feat of human endeavour, and a sanctuary to stir the soul.

The Grand Opening Celebrations, attended by 600 distinguished guests, commenced with an emotive drum and dance performance by U-Theatre. The internationally renowned group has performed their Zen-inspired drumming around the world for three decades. To celebrate Amanyangyun’s Grand Opening, U-Theatre’s stirring performance was choreographed around, and paid respect to, the resort’s eldest tree, the cherished ‘King Tree’, which sits at the heart of the resort, as a poignant reminder of the journey in the creation of Amanyangyun, which now safeguards priceless natural and cultural treasures. 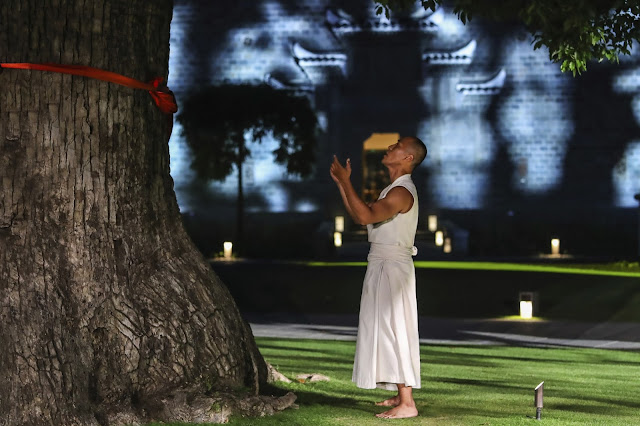 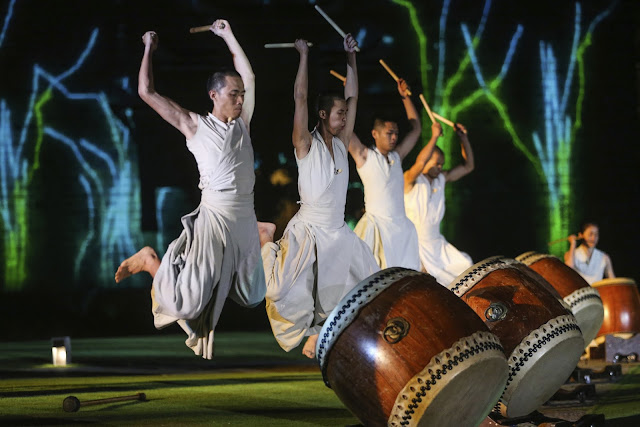 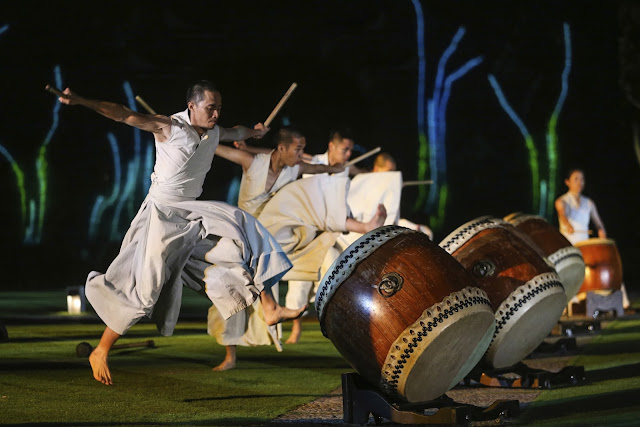 As the drums played to awaken the spirit of the ‘King Tree’, 18 drummers slowly made their way out of Nan Shufang, Amanyangyun’s cultural complex, towards the tree, thus closing the chapter of the relocation and reconstruction that took place over the last 16 years. This scene illustrated the reunion of the antique houses and trees which once stood together in Fuzhou, Jiangxi, and now together stand safely at Amanyangyun where they will keep on recounting their remarkable journey and story for generations to come.

A key moment in the performance saw each of the drummers nourish the King Tree with water, culminating in a scene where one artist bowed down to the tree, and carefully placed both hands at its base. His ethereal voice reverberated between the trees, and spoke to the spirit of the King Tree. With it, a pulse of light shot up and suddenly connected earth, tree and man, illustrating the harmony that must exist between man and nature. The performance was a poignant reminder of the importance of nurturing the past to enrich the future.

Mr. Vladislav Doronin, CEO and Chairman of Aman, addressed all guests and said “Every Aman has a story to tell and this one is no exception. This project and the many challenges it presented were unimaginable, but we overcame them not only to defy the test of time, but to push the boundaries of traditional hospitality. This resort, a legacy to the past, stands proud as an archive for future generations. I am especially grateful to Ma Dadong, the mastermind behind this unique restoration project and whose foresight and determination has made it possible to preserve the magnificent history of China for generations to come.”

“We human beings with our short lifespan are nothing but a fleeting traveller at a moment in time. Looking up at this sacred King Tree, in awe, I believe it was this tree that chose me to make this journey”, said Mr. Ma Dadong, the lion-hearted entrepreneur and philanthropist who started this iconic relocation and restoration project 16 years ago in his native, Fuzhou City, Jiangxi Province.

When walking around Amanyangyun, one is transported back to the bygone eras in Fuzhou City, the birthplace of many talents, one among is Tang Xianzu, the ‘Shakespeare of the Orient’. Tang’s masterpiece ‘Dream in the Peony Pavilion’ has been passed down from generation to generation in the form of Kunqu Opera. Renowned Chinese Kunqu Opera Singer Mr. Zhang Jun, presented Amanyangyun’s guests with three chapters from the famed ‘Dream in the Peony Pavilion’. The ethereal camphor forest and tranquil gardens set the tone for the performances. Across the lake and from a floating stage, Zhang Jun’s voice evoked memories of the past. Mr. Zhang Jun was joined by lyric coloratura soprano and opera singer Ms. Huang Ying during the last chapter of the Kunqu performance – a combination of the east and west. 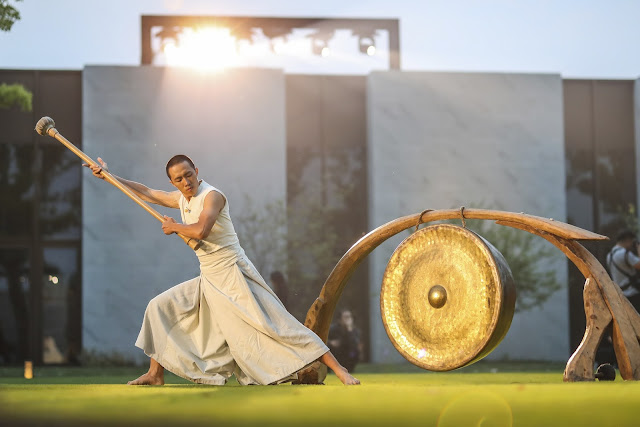 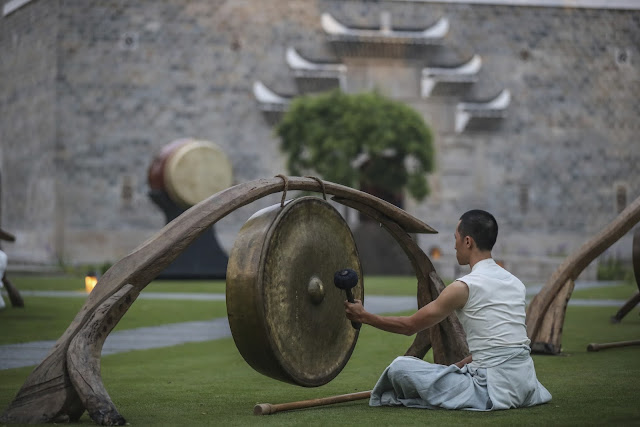 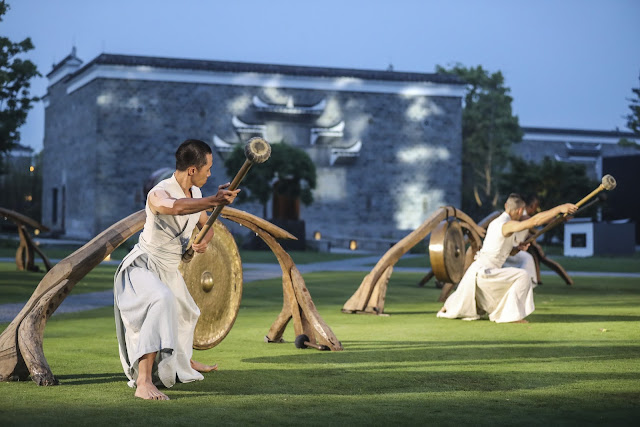 At Amanyangyun, old and new, natural and manmade, east and west, coexist in perfect harmony and the performances paid tribute to this very notion. Ms Huang Ying presented Mozart’s ‘Queen of the Night’ together with an Er-hu accompaniment by the famed Chinese Er-hu master Mr. Gao Shaoqing He is a Chinese artist and ambassador who bridges the traditional Chinese music and western music using his two-stringed Chinese fiddle. He presented two of his own master pieces, ‘Capriccio No. 2’ and ‘Mongolian Fantasy’ and finished his set with a lively performance of ‘Galloping Horse’ to guests.

A new culinary destination unto itself, Amanyangyun brought together expert chefs from Aman destinations around the globe to showcase a culinary journey across its three restaurants. Chinese restaurant Lazhu pays homage to Jiangxi, the native land of the cherished camphor forest and ancient dwellings. The lakeside Italian restaurant Arva and Japanese restaurant Nama were the ideal spots for viewing the live performances on the floating stage.

The Grand Opening Celebrations paid tribute to the 16 years journey in the creation of Amanyangyun, and opened a new chapter as Amanyangyun now continues Mr. Ma's legacy safely in Aman's hands.
Posted by Burhan Abe di Friday, May 04, 2018