Harnessing the wind to power a sea-skimming, adrenaline-fuelled flight over the waves, kitesurfing has taken the watersports community by storm in recent years. 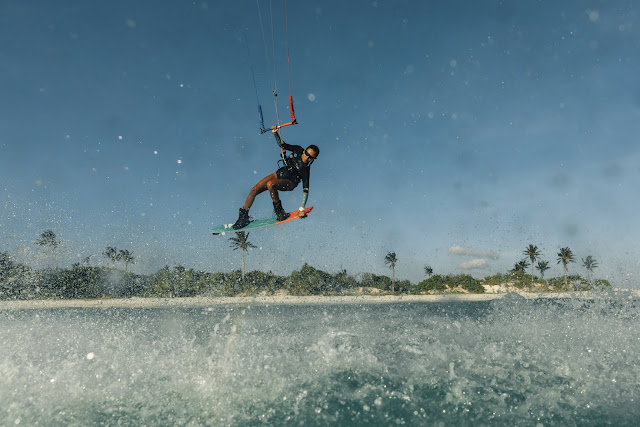 Professionals execute graceful, gravity-defying leaps and somersaults between ocean and sky, racing the shadows of their colourful kites. Yet with an experienced teacher, proper equipment and the right conditions, the sport is easier to learn than it looks.

Aman now offers kitesurfing at four destinations: Amanpulo in the Philippines; Amanpuri in Thailand; Amanyara in the Turks and Caicos, and Amanera in the Dominican Republic. On some of the globe’s finest kitesurfing beaches, Aman’s watersports professionals offer step-by-step tuition to all levels using top-of-the-line kites, harnesses and boards. Then, when tired yet exhilarated, kitesurfers can release the wind to its own devices and settle once more on terra firma, where Aman’s exceptional facilities await. 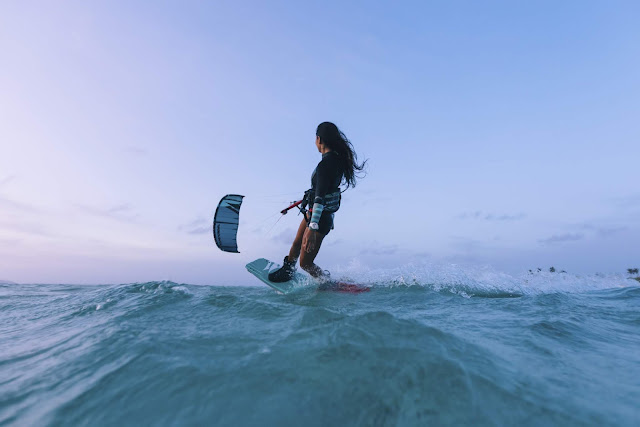 Amanpulo, Philippines
The epitome of a tropical-island retreat, Amanpulo encompasses the entire island of Pamalican in the Sulu Sea. This paradise in the Philippines is fringed by beaches and pristine coral reefs and could not be more perfect for kitesurfing. In fact, January 2019 saw the launch of the resort’s new Kite & Surf Centre in celebration of Amanpulo’s 25th anniversary. The centre is located on the island’s eastern side, facing the northeasterly wind known locally as Amihan. Picking up in mid-October and lasting through March with wind speeds from 15 to 35 knots, Amihan provides consistent wind conditions that are ideal for kitesurfing, for beginners and pro riders alike. Kitesurfers can launch right from the beach during these months and hone their skills in Naish kiting gear, the brand established by the windsurfing world champion and world famous kitesurfer Robbie Naish. 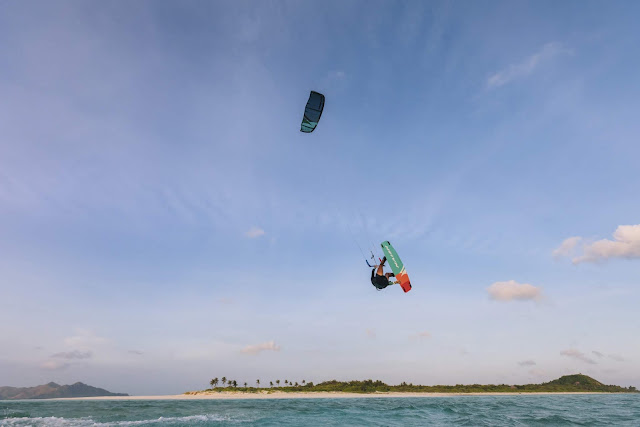 Amanpulo’s professional instructors include Paula Rosales, ranked as one of the best female kitesurfers in Asia, and lessons can include video footage from the centre’s waterproof stabilised cameras for reviewing the session. On 08 March, Paula will host a three-day Kite & Surf Immersion alongside five-time Vice World Champion and three-time Freestyle World Champion Bruna Kajiya; European Freestyle Champion Paula Novotna who is currently ranked third in the World Kiteboarding League, and Susi Mai one of the biggest female kitesurfers of all time and co-founder of MaiTai Global, a non-profit organization developed to protect the world’s oceans. The Immersion will include dinner with the professionals under the stars at Amanpulo’s Beach Club, yoga and meditation, a downwinder to Manamoc Island to experience local Cuyunon culture and kitesurfing with guidance from the experts on the vast Pamalican lagoon.

Also on the island’s eastern shore and next to the Kite & Surf Centre lies Nama, Amanpulo’s Japanese restaurant, offering a welcoming spot for a post-session meal once the sun has sunk below the horizon. The resort’s Beach Club is situated on the west coast and offers a casual dining area and delicious Mediterranean fare. Adjacent is the Sea Sports Hut, from which a host of other watersports activities can be enjoyed. These include kayaking, paddleboarding, pedalboarding, Hobie Cat sailing, Seabob experiences, guided snorkeling expeditions, fishing trips, boat trips to Manamoc Island and sunset cruises. 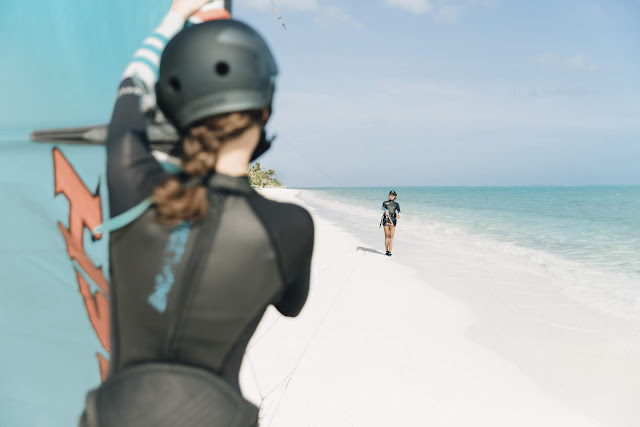 Amanpuri, Thailand
Lapped by the turquoise waters of the Andaman Sea on the west coast of Phuket, Amanpuri is situated on a private peninsula within a grove of swaying coconut palms. A sweep of stone steps descends from the main swimming pool to the white crescent of the secluded beach. From here in high season (November to March), kitesurfers depart in the resort’s new MasterCraft X23, which is the best wakeboarding boat on the market, for the five-minute ride to Bang Tao Bay. This magnificent bay, with its 6km white-sand beach, is known as one of Phuket’s premier kitesurfing destinations, with conditions suited to all levels.

New to 2019, former World Champion kitesurfer Jessica Winkler heads up the watersports team and conducts kitesurfing lessons for Amanpuri guests. An extreme-sports all-rounder, Jessica excels in all aspects of the sport from speed and course racing to freestyle, wave riding and big air. Jessica has travelled the world competing, as well as promoting her book Confessions of a Warrior and conducting motivational rehabilitation programmes. 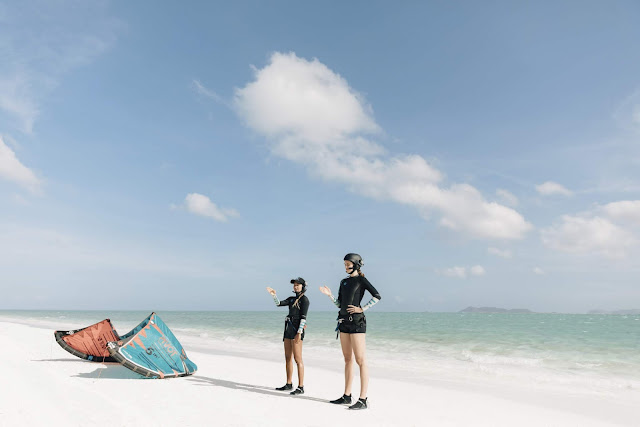 After any session on or in the water, guests can relax at Amanpuri’s Pool Terrace with its Mediterranean-inspired restaurant, lounging terrace and cocktail bar overlooking a 20m swimming pool. Another option is the Straw Hut Beach Bar, Amanpuri’s thatched beach-chic venue backed by boulders and natural vegetation situated right on the beach. A new addition in 2018 as part of Amanpuri’s 30th-anniversary refurbishment, the bar offers a selection of original Aman beach cocktails, Thai craft beers, fresh juices and smoothies.

Amanyara, Turks and Caicos
Renowned for its crystal-blue water and powder-white sand, Providenciales in the Turks and Caicos Islands is a premier destination for beach and watersports enthusiasts all year round. Set on the serene northwest coast, Amanyara features a Beach Club, Dive Pavilion and Nature Discovery Centre enabling guests to enjoy the resort’s pristine coastal and marine environment to the full.

Kitesurfing at Amanyara takes place from Long Bay Beach. A 30-minute drive from the resort, Long Bay boasts a broad, shallow lagoon along the eastern edge of Providenciales, protected by a fringing reef. A flat-water paradise, it has a sandy bottom and consistent side-shore wind, as well as waist-deep water, making wading back to your board a breeze, when necessary. Apart from the month of September, guests can kitesurf year- round, with Amanyara able to provide transfers and Kite Provo giving the lessons.

After working up an appetite, kitesurfers can return to Amanyara’s Beach Club, which overlooks the resort’s own 1,000-metre white-sand beach. With its restaurant, cocktail bar and lounging deck with panoramic sea views, the Beach Club serves Caribbean, Latin American and Mediterranean-inspired cuisine with signature dishes baked in a stone hearth oven. A range of watersports equipment, from Hobie Cats and SUPs, to ocean kayaks, Seabobs and Schiller bikes, is available for guests to use from the Beach Club, and a guided snorkelling trip departs twice daily from the beach (weather permitting) to a nearby coral head.

Amanyara’s fully equipped Dive Pavilion provides access to some of the world’s finest wall and reef diving, as well as a range of scuba-diving courses. Located directly in front of the resort and approximately 500 metres from the beach, are the remarkable coral reef walls of the Northwest Point Marine National Park. Further offshore, the region offers some of the Caribbean’s optimal fishing grounds. 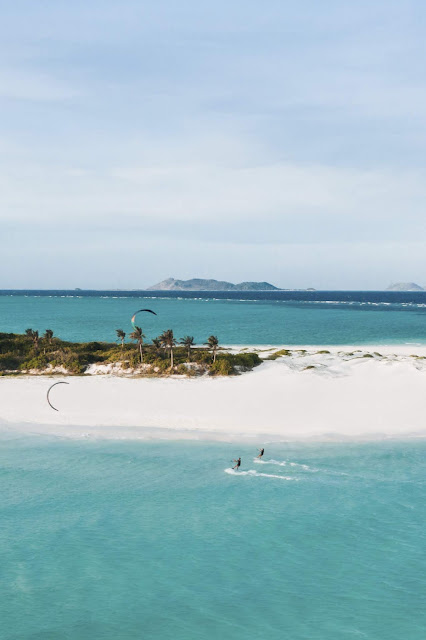 Amanera, Dominican Republic
The first golf-integrated Aman, Amanera is set on the idyllic north coast of the Dominican Republic. Backed by the dramatic Cordillera Septentrional mountain range, the resort offers breathtaking ocean views and direct access to the exquisite Playa Grande beach. But for kitesurfers, it is the resort’s proximity to Cabarete, where kitesurfing is rumored to have first begun, that makes Amanera such an exciting destination.

A vibrant seaside town renowned as much for its kitesurfing as for its seafood and buzzing nightlife, Cabarete is a 45-minute drive from Amanera. Strong, consistent trade winds blow side-shore and side-onshore all summer (May to October), although June, July and August are regarded as the ideal months for kitesurfing. Amanera has partnered with Kite Club, the largest and most renowned watersports centre in the country to offer guests a superb kiteboarding experience, whether they are at expert level or complete novices. Kite Club’s certified training programmes offer comprehensive private or semi-private lessons with three-hour, to three-day packages available.

There is also plenty to do on no-wind days, as Amanera is situated within a vast natural kingdom, a large part of which is pristine rainforest. Guests can SUP or kayak from Playa Grande beach, or simply relax at Amanera’s Club de Playa, tucked into a sandy cove where lunch is served from a comprehensive menu of local and South American classics. Playa Preciosa is the resort’s second, more secluded beach. Amanera also enables the exploration of Laguna Gri Gri, a beautiful freshwater lagoon lined with mangroves and ideal for swimming, snorkelling and stand-up paddleboarding. Sea caves nearby can also be explored before or after a beach picnic.
Posted by Burhan Abe di Wednesday, February 27, 2019

Email ThisBlogThis!Share to TwitterShare to FacebookShare to Pinterest
Label: Check In, Tourism Industry