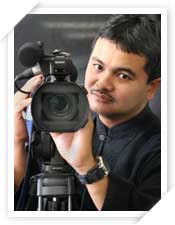 "IMPROVISATION, that is the soul of jazz that permeates deep in our hearts," says Naratama, producer/director of Voice of America (VOA), Indonesian Service, Washington DC, the U.S.

It seems that jazz is inseparable from the life of Naratama, formerly a lecturer at the Jakarta Arts Institute's (IKJ) Film and TV Department. Jazz is part of his daily diet.

He listens to the strains of jazz every chance he gets, either at home or in his car, from his collections of CDs or on a jazz radio station. He likes mainstream jazz as well as jazz fusion, which has a heavier beat. He feels mesmerized by the tinkling sound of the piano played by Ahmad Djamal and the unexpected guitar chords played by Lee Ritenour. This is one of the genres to have developed after the jazz rock era was spearheaded by Yellow Jacket, Level 42 and AL Di Meola.

Naratama is not just a jazz lover as he can also talk eloquently about the genres of jazz and the musicians that play them. It would be more appropriate to call him a jazz fanatic. When the Jakarta Jazz Festival, or JakJazz, was held in 1996, he was very happy to be given the opportunity to be a producer/director for a special JakJazz television production for four stages. "I had to stay awake for three days as I had to stay in our OB van to record the live shows," he said.

Indeed, during the three days he could enjoy the live shows to his heart's content. In 1998, braving everything, he made a TV program called Jazzy in SCTV together with Chico Hindarto and Eri Prabowo, two figures who deserve mention for their efforts in trying to popularize jazz in Indonesia.

Naratama handled various music programs on TV before he went to work for VOA in Washington. Many things make him long for Indonesia, including Java Jazz. "It's a pity I can't attend this great event in Jakarta. News about this event has even spread to Washington, DC," he said. Many Indonesians living in the U.S., particularly jazz lovers, talk about Java Jazz, he said. Some have decided to return to Indonesia just to attend this international event.

However, there is some consolation for Naratama with a Norah Jones & the Handsome Band concert being held on April 23 at the Constitution Hall, Washington. "Hopefully, I can still get tickets," he said, while also hoping that he can keep abreast of the progress of Java Jazz through Youtube, a video website. (Burhanuddin Abe)