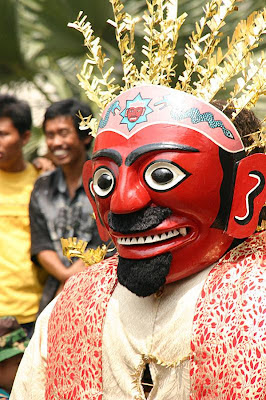 Jakarta
The Unitary State of the Republic of Indonesia is endowed with great diversity in terms of ethnic groups, languages, culture, tradition and religions. This diversity is also reflected in Jakarta, the capital city of Indonesia. Jakarta, which is the seat of the Indonesian government with a population of over 11 million people, is a metropolitan city and at the same time a tourist destination city with amazing charm.

As a metropolitan city, Jakarta has a full- range of facilities and infrastructure, ranging from the most modest to the most modern. Cheap hostels and posh star-rated hotels are available as well as sidewalk shopping centers and imposing and comfortable plazas. Various entertainment sites like discotheques, night clubs, bars, international restaurants as well as food stalls in tents are indeed attractive in their own uniqueness.

Tourist and recreational objects in Jakarta that are worth visiting include among others Sunda Kelapa Port, museums, the National Monument (Monas), the Ragunan Zoo, the Beautiful Indonesia in Miniature Park and the Keong Emas Imax Theater, Tamah Ria Senayan, Fantasy World, Jaya Ancol Dream Land with its Sea World and many others.

In adition, the composition of the population, made up of migrants from various regions across the country with their ethnic cultures and traditions, has made Jakarta virtually ”the Cultural Window” of the Indonesian people.

Bali
Tourism in Bali is the most advanced and developed sector but there are still chances for this sector to be developed in its modernity. This region is endowed with various tourist objects related to nature, history or culture. Take nature-related tourism, for example. This covers 47 tourist objects such as the panorama in Kintamani, the Kuta Beach, Legian, Sanur, the Land of Lot, Nusa Panida, Nusa Dua, Karangasem, Lake Batur, Lake Bedugul, Sangieh Nature Reserve, West Bali National park and Menjangan Island Sea Garden.

Meanwhile, culture-related tourism covers 83 tourist objects for example the art-related tourism in Ubud, the sacred site of the Land of Lot, the Barong rite in Jimbaran and various places of art and galleries, which have sprung up in several locations on Bali Island.

This culture-related tourism has been developing very rapidly, especially because many works of arts have been produced by Balinese artists and sculptors. Some expatriate artists have long stayed in Bali, for example Mario Blanko, Arie Smith, Rudolf Bonner and others. Likewise with history-related tourism. This can be enjoyed through some historical objects like the royal palaces in Karangasem, Klungkung and Buleleng.

Yogyakarta
In Indonesia’s map of tourism, the potential of Yogyakarta Special Region is ranked second after Bali. DIY is endowed with various objects for tourism, either physically or non-physically, aside from the region’s readiness in providing facilities to support tourism. Dubbed the city of education, Yogyakarta has human resources that are relatively of a good quality.

In addition, the region is also home to no fewer than 70,000 handicraft undertaking units and it also possesses other facilities that are highly conducive to promote tourism such as diverse accommodation and transportation facilities, various catering services, general travel agencies with the support of adequate tour guides and tourist security teams called ”Bhayangkara Wisata”.

The region’s potential for tourism becomes bigger thanks to its location next to the province of Central Java, so that the variety of tourist objects will increase. DIY is endowed with various specific objects with a strong and unique character such as the royal palace, Prambanan Temple and the silver handicraft in Kotagede. These specific objects enjoys the support given by a harmonious combination of physical and non-physical objects.

All these factors have only reinforced the competitiveness of DIY as a primary tourist destination province not only for domestic but also for foreign tourists. The reference to Prawirotaman and Sosrowijayan as ”international villages” prove the closeness of the atmosphere of Yogyakarta with the ”exotic taste” of foreign tourists.

West Java
The West Javanese are known to be religious with their rich cultural legacy and traditional lofty values. They also pursue a social behavior based on the philosophy that can be summed up locally as ”silih-asih, silih-asah, silih-asuh” , which literally means ”loving each other, providing knowledge to each other and fostering each other”, and practised among the local community,.

The tourism sector is also one of the potential sectors for development in West Java. This province can boast a variety of tourist objects, related to nature, culture or history. Its nature-related tourism covers among others Puncak area, Salabintana, Lembang, Tangkuban Perahu, Mount Papandayan, Bogor Botanical Garden, Juanda Forest Park in Bandung, Mounts Gede and Pangrango National park, Ujung Kulon National Park, the Pelabuhan Ratu beach in Sukabumi, the Pangandaran Beach in Ciamis and Carita in Anyer.

Culture-related tourism covers among others Cangkuang Temple in Leles, Garut and Baduy and Sisingaan villages in Tasikmalaya while history-relatd tourism covers the Kasepuan royal palace in Cirebon, Old Banten in Naga village, Serang, historical relics of Megalithicum in Cipari, Kuningan and Boscha Observatory in Bandung. In 1997 there were 1,262 hotels and other forms of lodging with a total capacity of 37,094 rooms. Aside from the locations already referred to, there are still many other tourist objects in West Java.

Culture-related tourism covers among others Panataran Temple, Jawi Temple, Jago Temple and Singosari Temple in Malang, water buffalo race in Madura, the ”labuhan” rite along the South Sea coast, Ponorogo reog traditional art and ludruk. Meanwhile, history-related tourism may include the graves of the earliest propagators of Islam in Java such as Sunan Ampel, Sunan Giri, Sunan Bonang, Sunan Mojoagung and Sunan Drajat, the grave of Bung Karno, Trowulan, which is home to the relics from the Majapahit Kingdom, and Empu Tantular Museum.

A large population size and their relatively good education make up a human resources with a great potential to be developed and made more productive through various manpower training programs that are adjusted to the needs. In relation with the regional autonomy, human resources assume great significance because creative human resources will have great creativity and a strong working ethos so that they can produce a high added value for a region.

These tourist objects in Central Java have always been crowded by domestic and foreign tourists. The province of Central Java is strategically located as it is in the middle of centers of economic activities in Java island, namely, between the western region development centers like Jakarta-Bogor-Tangerang and Bekasi and the eastern region, which covers Gresik- Bangkalan-Mojokerta – Surabaya – Sidoarjo – Lamongan (abbreviated into Gerbangkertasusila) and the planned toll road in Yogyakarta – Solo – Semarang (Joglosemar). Then there are also national and international sea routes at Tanjung Mas harbor, Semarang. All this has enabled Central Java to expand inter-city, inter-island and international marketing and trading networks.

Highly attractive nature-related tourism in West Sumatera include among others: Ngarai Sianok in Bukit Tinggi, Lake Maninjau, Lake Diatas, Lake Dibawah, Lake Singkarang, the waterfall in Anai Valley, Ambun Pagi, Caroline beach, Bumpus beach, Kerinci Seblat National Park (TNKS) and a volcano in Singgalam. Culture-related tourism covers among others the Japanese cave in Agam and the Royal Palace of Pagarujung in Batusangkar. In 1996, as many as 108,776 foreign tourists visited this province. This figure is quite high and it is expected that Visit Indonesia Year 2008 may restore the tourism glory in West Sumatera.

Riau & Riau Islands
The tourism sector in Riau can be developed further, for example tourist areas of Batam and Bintan as well as other tourist sites, related to nature, culture or history. Riau is home to 380 hotels with a capacity of 14,776 bedrooms and 23,081 beds. Most tourists visit Batam, Tanjung Balai Karimun, Tanjung Uban and Tanjung Pinang. The tourism sector in this province is still highly potential for further development, in particular the tourism related to nature and the sea.

Meanwhile, the province of Riau Islands is the second gateway of tourism for foreign tourists after Bali Island. In 2005, as many as 1.5 million foreign tourists came to this province. The tourist objects in Riau Islands province include among others the beach tourism in various regencies and municipalities. Melur Beach and Nongsa Beach in Batam municipality, Belawan Beach in Karimun regency, Lagoi Beach, Tanjung Berakit, Trikora Beach and Bintan Leisure Park in Bintan regency. Natura Regency is noted for its sea-related tourism such as snorkeling.

Aside from beach and sea-related tourism, the province of Riau islands is also home to a number of other tourist objects such as a nature reserve, historical tombs, traditional dances and events unique to this region. Penyengat Island in Tanjung Pinang is a historical island because it is home to a historical mosque and the tombs of Raja Haji Fisabililah and Raja Ali Haji, both national heroes.

The province’s Bunaken Sea National Garden and Bogani Nani Wartabone National Park are potential assets for nature-related tourism in North Sulawesi. As many as 25,225 foreign tourists from Japan, the United States, Holland, France, Britain, Belgium, Canada, South Korea and other countries have visited this province and it has also registered 432,999 domestic tourist arrivals. Many nature-related tourist areas in North Sulawesi province can boast their beautiful panorama.

As North Sulawesi is geographically the northernmost territory of our country and directly shares a border with the Pacific Ocean, this province has a huge potential to serve as a gateway for regional and global economic activities. Therefore, this province has quite a big opportunity to develop international cooperation, particularly trading with neighboring countries that are geographically close to it such as the Philippines and Malaysia. If all these opportunities can be smartly viewed and made use of, this province may foster profitable cooperation in regional and international trade. This will make North Sulawesi one of the economic centers in Indonesia with a bright prospect.

West Nusa Tenggara
Mataram is the provincial capital of West Nusa Tenggara. Overland, sea and air transportation facilities are available in this city. Central Lombok is one of the tourist destination areas in this province. Its location is easily accessible as it is only some 30 km away from Selaparang airport in Mataram. The province can boast a series of white sandy beaches. They are highly exotic and directly face the Indian Ocean. A number of surfing locations are still too ”virgin” to miss by surfing lovers.

Meanwhile, the tradition of the forefathers kept alive in daily activities in Sade and Tansang Angsang villages, both cultural reserve villages, depicts how the ethnic Sasak led their lives in the early days of their civilization. The traditional weaving in Sukarane, the earthenware handicraft in Penujak, antiques made from Ketak and rattan in Beleka village – they all support greatly the development of tourism in this province. Then there are also many unique traditional rites that spread their magic power and are still practised by the ethic group inheriting Lombok Island. All tourist sites in Central Lombok are accessible by means of overland transportation. (Vox Populi)
Posted by Burhan Abe di Sunday, June 08, 2008

Email ThisBlogThis!Share to TwitterShare to FacebookShare to Pinterest
Label: Bali Molek, Gresik, The Beauty of Indonesia