Layout of office matters in productivity 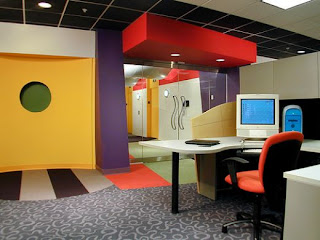 Previously it was sufficient to have office space and the related equipment but today, with the wide-ranging kinds of work, office design has to match the work, function and the personality of its occupants, while most important is the comfort factor.

That is why the interior design business, especially outfits that deal with offices, is enjoying rapid growth in Indonesia. This is also related to the fact that numerous office buildings are continuously being built in major cities, especially in Jakarta. Hence the office building sector obviously dominates property sales, which is a good sign for the interior design industry.

Today’s sophisticated technology has also brought many changes to the design of workstations, for example computers with slim monitors are now preferred. This type of monitor saves space because it can be attached to a workstation partition. To save energy, some companies have replaced conventional desktops with laptops. Such an initiative obviously creates a roomier and cleaner work space.

Many office owners interpret the function and comfort factors into a minimalist design that is more functional and transparent. “The emphasis is on more efficient use of space, which has an impact on furniture design and accessories,” said Helen Anggreny of Business Development Office Culture, which is an integral part of PT Cellini Design Center.

Office Culture’s first outlet opened at the Jakarta Design Centre in March this year followed by a branch at Ratu Plaza on Oct. 18. “The intention was to expand our market, especially in the CBD in Jakarta,” she said.

This company does not merely sell office equipment but customizes it further to meet each client’s requirements based on the office space and the design wanted. Many clients want today’s style for their office interior but with a personal touch. It is the job of interior designers, such as Office Culture, to meet the demand.

The interior design of an office is usually influenced by the shape and concept of its organization. A newly established company, for instance, has a simple organization as it consists of one director and a number of staff members. At this stage it is sufficient to have a simple and functional workstation, such as tables without partitions in a circular position, for easy interaction and information exchange.

Meanwhile, a company that has been established for some time usually has an organization that has developed further. The number of managers is higher and there is a larger hierarchy. Such an organization often requires more complex workstations. In this case, employees are accorded more privacy in their offices according to their rank or designations. The general or low level employees can probably be placed in rooms that have partitions in the form of cubicles while the head of the company gets a private, enclosed room.

However, nowadays more offices view transparency as convenient for information exchange and facilitating interaction. That is why many offices have got rid of partitions that separate tables. This concept of workspace has been applied in developed countries.

It is not surprising, therefore, that in developed countries most office equipment is portable. Workstations are not only minimalist but come in knockdown form. One company in Germany has produced a lighting system in the form of a lamp that is hung on a pole. This design fits an office that keeps growing. So when the office has to be moved, adding or reducing the number of employees, it is easy to take it apart and reinstall all the office equipment. Such a portable lighting design is advantageous as one does not have to tamper with the ceiling.

The trend of material chosen is no longer wood, because the modern design concept uses environmentally friendly material. Wood not only reminds us of tree felling in forests but it can also be costly. Today, using fine materials is avoided to reduce costs. Besides, using fabricated materials easily gives a modern appearance to the furniture and interior design.

Of course, wherever you work you certainly need a comfortable interior design to make you more productive. This means such an interior design has an atmosphere that boosts work performance. The kind of atmosphere indeed very much depends on the type of work, your tastes and requirements. The office of a bank is quite different from that of a publishing office, and a consultant’s office will not look similar to a production house office and so on. It has to be taken into consideration that the scope of management activities covers not only office-related activities but also other aspects such as the employees, the cost of running the office, procedures, office-related methods and so forth, all of which are accommodated in the space and design concept of the office.

What is important to remember is that the office design must be healthy, comfortable, neat and attractive so that employees feel at home to do their various tasks over an eight-hour or more workday. (Burhanuddin Abe)