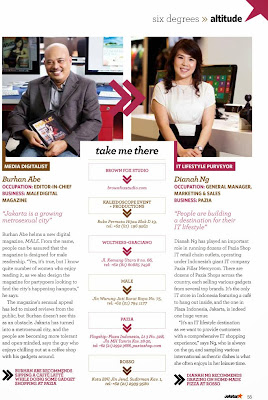 “Jakarta is a growing metrosexual city”

Burhan Abe helms a new digital magazine, MALE. From the name, people can be assured that the magazine is designed for male readership. “Yes, it’s true, but I know quite number of women who enjoy reading it, as we also design the magazine for partygoers looking to find the city’s happening hangouts,” he says.

The magazine’s sensual appeal has led to mixed reviews from the public, but Abe doesn’t see this as an obstacle. Jakarta has turned into a metrosexual city, and the people are becoming more tolerant and open-minded, says the guy who enjoys chilling out at a coffee shop with his gadgets around. 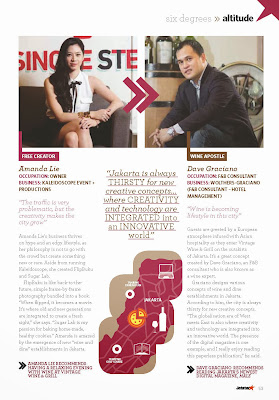 “Wine is becoming lifestyle in this city”

Guests are greeted by a European atmosphere infused with Asian hospitality as they enter Vintage Wine & Grill on the outskirts of Jakarta. It’s a great concept created by Dave Graciano, an F&B consultant who is also known as a wine expert.

Graciano designs various concepts of wine and dine establishments in Jakarta. According to him, the city is always thirsty for new creative concepts.

“The globalisation era of West meets East is also where creativity and technology are integrated into an innovative world. The presence of the digital magazine is one example, and I really enjoy reading this paperless publication,” he said.

“People are building a destination for their IT lifestyle”

Dianah Ng has played an important role in running dozens of Pazia Shop IT retail chain outlets, operating under Indonesia’s giant IT company Pazia Pillar Mercycom. There are dozens of Pazia Shops across the country, each selling various gadgets from several top brands. It’s the only IT store in Indonesia featuring a café to hang out inside, and the one in Plaza Indonesia, Jakarta, is indeed one huge venue.

“It’s an IT lifestyle destination as we want to provide customers with a comprehensive IT shopping experience,” says Ng, who is always on the go, and sampling various international authentic dishes is what she often enjoys in her leisure time. 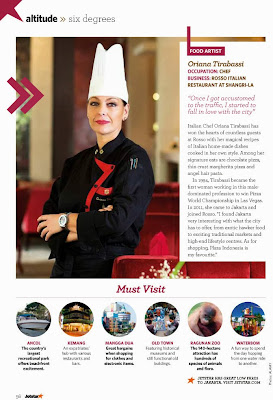 “Once I got accustomed to the traffic, I started to fall in love with the city”

Italian Chef Oriana Tirabassi has won the hearts of countless guests at Rosso with her magical recipes of Italian home-made dishes cooked in her own style. Among her signature eats are chocolate pizza, thin crust margherita pizza and angel hair pasta. In 1994, Tirabassi became the first woman working in this maledominated profession to win Pizza World Championship in Las Vegas.

In 2011, she came to Jakarta and joined Rosso. “I found Jakarta very interesting with what the city has to offer, from exotic hawker food to exciting traditional markets and high-end lifestyle centres. As for shopping, Plaza Indonesia is my favourite.”

“The traffic is very problematic, but the creativity makes the city grow”

Amanda Lie’s business thrives on hype and an edgy lifestyle, as her philosophy is not to go with the crowd but create something new or rare. Aside from running Kaleidoscope, she created FlipBuku and Sugar Lab.

FlipBuku is like back-to-thefuture, simple frame-by-frame photography bundled into a book. “When flipped, it becomes a movie. It’s where old and new generations are integrated to create a fresh sight,” she says. “Sugar Lab is my passion for baking home-made, healthy cookies.” Amanda is amazed by the emergence of new “wine and dine” establishments in Jakarta. 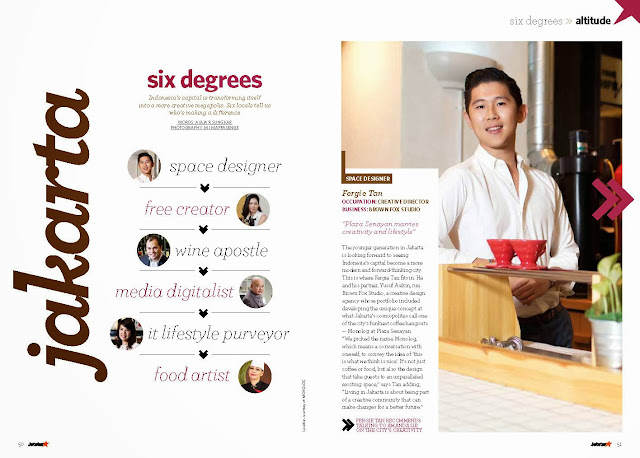 The younger generation in Jakarta is looking forward to seeing Indonesia’s capital become a more modern and forward-thinking city. This is where Fergie Tan fits in. He and his partner, Yusuf Asikin, run Brown Fox Studio, a creative design agency whose portfolio included developing the unique concept at what Jakarta’s cosmopolites call one of the city’s funkiest coffee hangouts — Monolog at Plaza Senayan.

“We picked the name Monolog, which means a conversation with oneself, to convey the idea of ‘this is what we think is nice’. It’s not just coffee or food, but also the design that take guests to an unparalleled exciting space,” says Tan adding, “Living in Jakarta is about being part of a creative community that can make changes for a better future.”