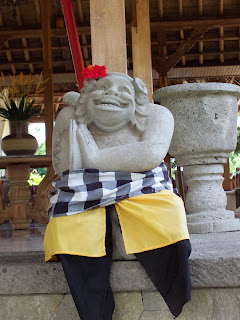 HISTORIANS believe that descendants of a prehistoric race who migrated through mainland Asia to the Indonesian Archipelago first settled in Bali around3000 BC. Stone axes and adzes discovered in Sembiran, a village in Northern Bali date to the Ice Age. Further discoveries of more sophisticated stone tools, agricultural techniques and basic pottery at place people living in Cekik (far West Bali) during the Neolithic era.

Other artifacts unearthed in Cekik, indicate a settlement together with burial sites of around a hundred people from the Neolithic to the Bronze Age. The massive drums of the Bronze Age, including the most famous and largest drum in Southeast Asia, the Pura Penataran Sasih (Moon of Pejeng), nearly two meters wide, are now housed in Penataran Sasih Temple in East Ubud. Carved stone sarcophagi from the same period found on Bali and in East Java can viewed at the Museum Bali in Denpasar and Museum Purbakala in Pejeng.

The end of the prehistoric period in Indonesia can be traced to the arrival of Hindu people from India around 100 BC as determined by Brahmi inscriptions on postherds. Prasasti, or metal inscriptions, Bali’s earliest written records from the 9th century AD, show a significant Buddhist and Hindu influence; especially in the statues, bronzes and rock-cut caves around Gunung Kawi (Old Monument) and Goa Gajah (Elephant Cave).

The name Balidwipa appears in various inscriptions, including the Blanjong charter issued by Sri Kesari Warmadewa in 913 AD. It was during this time that the complex irrigation system Subak developed to grow rice. Many of Bali’s religious and cultural traditions still in existence today date to this period.

Proof that Balinese society was already quite sophisticated by this period can be found on a stone carving in the Pura Korah Tegipan near Batur of the marriage portrait of Balinese King Udayana to East Java’s Princess Mahendratta. Their son, Erlangga, born around 991 AD, later succeeded to the throne of the Javanese kingdom, bringing Java and Bali together until his death in 1049.

The Hindu Majapahit Empire (1293 – 1520 AD) on Eastern Java established a Balinese colony in 1343. The eventual decline of that empire in the 15th century led to an exodus of intellectuals, artists, priests and musicians from Java to Bali.

Though a Portuguese ship foundered off Bali’s Bukit Peninsula in 1585, the first confirmed European on Bali, Dutch explorer Cornelis de Houtman, came ashore in1597. Dutch rule over Bali came much later though they never to achieved the control they had in other parts of Indonesia such as Java and Maluku. In the 1840s, The Dutch established a presence in the island’s North, where they played off various distrustful Balinese realms against each other. The Dutch mounted large naval and ground assaults first against the Sanur region and then Denpasar.

Hopelessly overwhelmed in number and armament, but not wanting to face the humiliation of surrender, the Balinese mounted one final defense, the suicidal assault known as puputan. Despite Dutch pleas for surrender, an estimated 4,000 Balinese marched to their death against the invaders. Afterwards the Dutch governors exercised little influence over the island, generally allowing local control over religion and culture to remain intact.

Japan occupied Bali during World War II. Following Japan’s Pacific surrender in August 1945, the Dutch promptly returned to Indonesia, including Bali, immediately reinstating their pre-war colonial administration. Though Balinese rebels resisted, using Japanese weapons, by 1946, the Dutch constituted Bali as one of the 13 administrative districts of the newly-proclaimed Republic of East Indonesia, a rival state to the Republic of Indonesia proclaimed by Sukarno and Mohammad Hatta. When the Netherlands eventually recongnized Indonesian independence on December 29 1949, Bali was included in the ‘’Republic of the United States of Indonesia.’’ In 1956 Bali officially renounced the Dutch union and legally became a province within the Republic of Indonesia.

The 1963 eruption of Bali’s Mount Agung Volcano killed thousands and created economic havoc. Countless Balinese fled permanently to other parts of Indonesia. More tragedy befell the Balinese in 1965, after a failed coup d’etat in Jakarta when killings of often falsely-accused members and sympathizers of the Partai Komunis Indonesia (Communist Party of Indonesia) by right-wing General Soeharto-sponsored militias took place on Bali and across Indonesia. Estimates put the Balinese death toll at more than 100,000. Many unmarked but well known mass graves of victims are located around the island.

A Culinary Trail Journey at Buahan, a Banyan Tree...

Conserving Traditional Balinese Cuisine and Foraging in the Wild with Local Communities Buahan, a Banyan...

Toast the sunset, drink the view! Perched high above the palms on the famous Kuta...

Make this choice and from now on, you will forever be a part of every adventure!