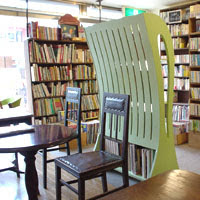 Over the past decade, Indonesia has witnessed a rapid progress in its book publishing industry, not only in terms of the number of books published but also the number of new bookstores.

Many new bookshops have sprung up in addition to the ubiquitous Gramedia and Gunung Agung, two institutional players in the nation's book business. These new bookshops can be found not only in imposing shopping centers downtown, but also hidden away in backstreets.

The emergence of these new players has made competition in the book business much tougher. With a novel concept of turning the bookstore into a recreational place, new players have been successful in luring bookworms into their outlets.

In the past, it would never have occurred to many Indonesians that a bookshop could be combined with a restaurant or cafe. When you get tired from all that book browsing, you can drop into the restaurant or cafe to eat and drink while chatting with friends and enjoying the ambience. If you are a member of the bookshop's club, you may also browse the Internet for as long as you wish.

One book shops that has developed this concept is QB World Bookstore. With a network consisting six outlets, QB has been deliberately designed to provide comfort to their customers. Aside from a cafe, QB also provides Internet facilities.

"We want to be different. Here you can not only buy books but also get involved in other activities such as book discussions, film screenings, art exhibitions, and photo exhibitions," said Richard Oh, owner and manager of QB network.

Richard would like to establish an emotional relationship between buyers and QB that is not confined to a business transaction. Therefore, QB adopts a membership system. A customer buying Rp 1 million worth of goods is entitled to a QB membership card.

Another advantage for QB members is that he or she receives weekly reports about new books and upcoming QB events and activities. If you have a QB membership card, you can use it as a discount card at 30 places around town including restaurants, cafes, hotels and other places. The annual membership fee is a mere Rp 50,000 (about US$5).

Winfred Hutabarat established a similar network of bookshops under the name of Aksara. Aksara also accommodates non-bookworms and that's why you can also find non-book products like audio CDs, design objects, gift items and souvenirs in their bookstore. With its browser-friendly concept, you are free to read without any obligation to buy anything.

Besides Aksara, there are several other bookshops that have adopted a similar marketing approach, such as Kinokuniya, Maruzen and Times. This new concept has certainly worried the old players. Friendly service and the comfort that new players offer to customers may easily encourage book lovers to frequent these bookshops rather than the old ones.

Besides, these new bookshops also offer competitive prices. QB, for example, can give a discount of up to 20 percent for best-seller books, twice the amount of conventional bookshops.

With growing competition from the new players, established bookstore operators like Gramedia and Gunung Agung cannot afford to relax. In a way, Gramedia has also adopted a one-stop shopping concept in several of its spacious outlets such as in Matraman, East Jakarta. The only difference lies in the management pattern.

Gramedia, like the new bookshops, also sells non-book items. Just go to the first floor of the Gramedia bookshop in Matraman. There you can find many wares including sports equipment, bags, souvenirs, computer printers and even musical instruments. So, if you come to this bookshop, you don't necessarily come to buy books. Perhaps you want to buy a badminton racket or a guitar.

What about Gunung Agung? Established over half a century ago, Gunung Agung also keeps rejuvenating itself. One of the strategies that this chain has adopted is to reposition its target market.

Gunung Agung has 32 outlets in Java and Bali. These bookshops can be found in shopping malls or as stand-alone stores with different demographic and target markets.

Every bookshop operated by the bookstore chain has a different target market. Gunung Agung in Pondok Indah Mall is quite different from the one in Arion Plaza in terms of the shop and merchandising concept. Both are located in Jakarta but their target markets are quite different.

Once these people have a good image about Gunung Agung, they will frequent the bookshop even when they become adolescents and have their own children later. Once an emotional tie is established between Gunung Agung and people, the hope is that they will also take their family members to shop there.

Gunung Agung has worked hard to change its image as a serious bookstore and tries to make itself appear welcoming for their target market. That's why this bookshop has carried out various attractive promotional programs such as book discussions, author book signings, story-telling, and product demos. It also offers competitive prices.

In addition, Gunung Agung has also improved its service to its customers. The bookstore not only shows hospitality to its visitors but it also sells quality goods and provides comfort inside. Other things that this bookstore has done is to display its wares correctly, arranging merchandising in such a way that they create an attractive visual effect.

All these different marketing models are but competitive efforts to pamper consumers. It is the only way that bookshops can stay relevant and thus survive. (Burhanuddin Abe)