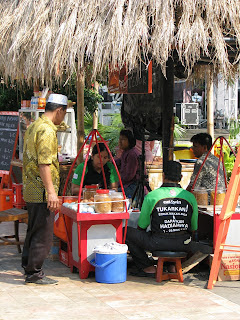 You are what you eat. Indonesian dishes reflect the cultural differences in . According to Wikipedia , foods in differ depending on which regions they come from and have absorbed various cultural influences derived from the other ethnic groups or from outside culture.

Throughout history, has always become a trading place between two continents. That’s why many ingredients, food materials and cooking techniques from Malays, Indians, Chinese, Middle Eastern people and Europeans have been mixed with the characteristics of traditional Indonesian cuisine, therefore producing cuisine varities that cannot be found elsewhere. Even before the Dutch came to , the Spaniards and the Portuguese had taken many products from the to .

In the western and central parts of , the main dishes are usually cooked in the morning and are eaten about . In many families, there are no fixed meal time where all family members get together. That’s why many dishes are cooked in such a way that they will remain fresh although they must stay in room temperature for a few hours. In , the dishes are served with rice and several side dishes and vegetables, which are served to complement the rice. One of the most elements in Indonesian cuisine is the hot spicy sauce or paste called “sambal”.

The dishes popular in are not much different from other Asian foods. Dishes with soysauce and beancake as well as tofu are also very popular. Beancake may be said to be the most favorite food in .

restaurants are most easily found in various regions in and food has even become one characteristic of Indonesian dishes. restaurants come from the Minangkabau tradition in . In a restaurant, the dises are served in small plates. A visitor can choose the dishes that he likes and pays only what he chooses. The taste is hot and one of well-known dishes is “rendang” (beef, or other ingredients, cooked in chilies and coconut milk until it becomes dry).

Unlike the dishes in the Western cultural tradition, in the dishes are not usually eaten in the order of the appetizer, the main course and the desserts. is noted for its great variety of cakes and snacks, which are usually suitable for desserts. Nevertheless, cakes tend to be considered as snacks that are eaten in the intervals between breakfast, lunch and dinner. In the same way, refreshing dishes and drinks like “es campur” (ice mixed with fruits and syrup), “es teler” (a fruit cocktail with topping of condensed milk suffused with shaved ice) and so forth can be served before the main course comes. (Abe)