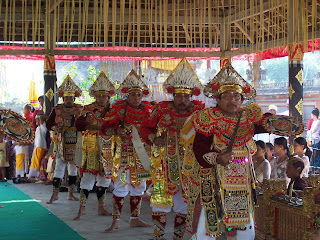 It occurs every 210 days and lasts for 10 days. Galungan means "when the Dharma is winning." During this period, Balinese believe the deified ancestors of the family descend to their former homes. They must be suitably entertained and welcomed, with prayers and offerings made for them. Those who have ancestors buried in the village cemetery, must make offerings at the graves.

The Balinese "Day of Silence" falls on Bali's Lunar New Year, in late March or early April. On New Year’s Eve families parade with a giant monster doll known as Ogoh-Ogoh to the village temple where they symbolically burn it to exorcise evil spirits for the year to come. Next the island itself must be purified, an excuse for everyone to run amok through the villages all night, smashing effigies and clanging the kulkul, a traditional bamboo bell. The next day, Bali is completely silent (no electricity, working, traveling or eating) to ‘trick’ the malicious spirits into believing the Hindu isle is now uninhabited so they will leave for another year.

Balinese people in the Northern part of the island celebrate the first four days of the new Pawukon cycle as special religious days called Pagerwesi. The word itself comes from two Javanese words, pager (fence) and wesi (iron). According to their belief, one should surround oneself with a strong fortification against the forces of evil.

Pagerwesi celebrates an ancient battle between good and evil is celebrated. Locals will put up penjors, and make special offerings for the uncremated dead bodies in the cemeteries. The offerings are usually placed at every house compound and temples.

Before Pagerwesi, celebrants will perform a series of temple rituals known as Soma Ribek. Following the celebration, Balinese Hindus will continue to celebrate Sabuh Emas Day with colorful offerings made and dedicated to the Lord of Jewelries, especially gold jewelries and Chinese coins.

The ritual performed to send the dead through the transition to the next life begins when the village Kul Kul, a bell hanging in the tower of the village temple, sounds a certain beat to announce the departure of the deceased. No tears are shed, for he is only gone temporarily and he will reincarnate into the family.

In the Balinese belief system, Mepandes helps people rid themselves of the invisible forces of evil. Teeth symbolize the evils of lust, greed, anger, insobriety, confusion and jealousy. Filing the teeth therefore renders someone more spiritually beautiful, as well as announcing the rite of passage for an adolescent into adulthood.